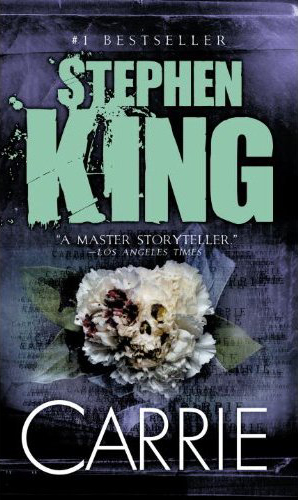 So after reading On Writing, the memoir by Stephen King, I decided to read one of his books to experience his magnificence. I also wanted to finally confront my fear of reading a Stephen King novel and being forever scarred. Since his movies always scared me, I reasoned that his books would be even worse.

I decided to start at the beginning so I picked up a copy of Carrie. It took me a while to begin reading. Though I’ve watched the movies, original and remakes, many times, I was afraid that somehow the book would be more alarming. It turns out to be a good read.

I couldn’t help feeling sorry for Carrie. She has no friends and is bullied at school by the popular kids. Then she goes home to be further tormented by her religious-manic mother. The day of her first period was traumatizing. She knew nothing about periods. Believing the act of sex to be evil and that menstruation introduces that evil, her mother saw no reason in mentioning it to Carrie. When her period came, Carrie thought herself bleeding to death. Shocked by what’s happening to her, she starts to freak out only to be penalized for her oddity by the girls in the locker room who throw tampons at her, shouting plug it up. The girls gang up on Carrie and stone her with tampons as if to exile her from joining them in womanhood.

It is the trauma of this experience that causes Carrie’s telekinetic abilities to resurface (her abilities first appeared when she was a little girl). She becomes aware of it on her walk home from school when she caused a boy to fall off his bicycle (he was taunting her and she was pissed). She begins to exercise her ability at home, which scares her mother who believes Carrie to be the devil’s spawn.

Wanting to do well and allow Carrie to have a normal high school experience, Sue Snell, a good girl who tormented Carrie but can’t understand why, asks her boyfriend Tommy to escort Carrie to the school dance. He agrees. Tommy is a good kid, a perfect match for Sue, two do-gooders. In contrast, there is Chris Hargensen, a fellow tormentor, and her sadistic boyfriend Billy, imps who want to make hell out of Carrie’s high school existence. It is their prank, a moment to further humiliate Carrie, that sets off a chain of events that nearly obliterate the entire town and everyone in it. Carrie decides to expend herself and use her telekinetic ability to bring doom to the people who torment her.

Carrie was an easy read. I was bored at first and a bit confused but as I continued to read, the pace picked up and I got used to the format of the story. Carrie is for enjoyment. It’s a story to get lost in on a quiet day when a few hours of free time are available. Compared to the movie, I prefer the movie. The story is simple and in most cases I prefer to that in film than in books. However, I do like that it is at the moment that Carrie embarks on womanhood that she becomes aware of her telekinetic abilities. She becomes aware of herself and begins to identify who she is. I think the ending passages are the best. It is when she embraces her ability, embraces who she is, that everyone notice her and know who she is (even fear her), whether they want to or not.

This one was okay so I shall try another Stephen King novel, scared as I am. I think I’ll read any of the others except It and Pet Sematary. Those movies were really scary and I fear the books are worse.

2 thoughts on ““Carrie” by Stephen King”