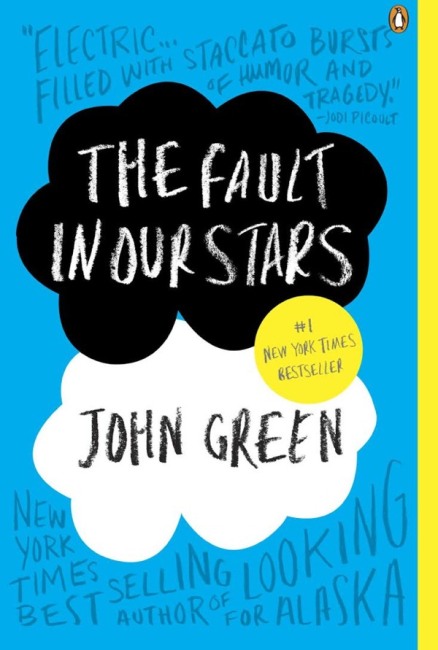 When my cousin told me he was reading The Fault In Our Stars I quickly copied him and did the same. I had avoided the book for a while though it’s blue cover beckoned at me from the shelves at Barnes & Noble. While I was curious to know what all the hype was about (it’s a bestseller and certain media outlets claim John Green knows what goes on in teenagers’ heads), I shied away from it because I was told the story is sad and I hate to cry (a silly reason). My cousin didn’t cry (so he says) but he enjoyed the story so I purchased the book.

Now, this is probably silly but I do love to smell and caress books. I guess that makes me a book-fondler or something. The Fault In Our Stars (TFIOS) has a smooth, thick jacket. I often rub and run my fingers across it while reading. My hands are sensitive to texture (which means I hate touching corduroy and velvet) so touching such a surface was all the more enjoyable. The pages are also thick, which I was a bit surprised to see since the paperbacks I’ve purchased are of a cheaper quality with thin leaves within that my highlighter sometimes bleed through. But TFIOS’s were of such great quality that I could easily cut myself on them. See, reading is dangerous. Anyways, on to the story.

I’ve tried many times to summarize this story but I’m unable to do so without falling short in some way. I think the best way to relay this story is to tell everything that happens. To simply state that it’s a story about a girl and a guy who both have cancer and falls in love but one dies is to fall short of the scope of it, the questions it raises, and the emotions it evokes. So instead of a summary (you can read one in one of the related articles below), I’ll jump right into my reflection.

I didn’t like it much. That was my initial reaction. And it’s not the story that I didn’t like. It was the dialogue. I simply could not get used to it. It did not ring true to me. Of course, it is possible that some teenagers do have such advanced philosophical conversations but it was not consistent throughout and often I disbelieved the characters’ diction. Sometimes they sound like teens and other times like middle-aged adults, which was confusing. What annoyed me was when they met Peter Van Houten and for some reason did not know what ontological means. From the conversations they have, I expected them to know.

At first I thought I was being too hard on the book. Maybe I’m not giving it much of a chance, I thought. After all, it did take a while for me to get in to the story but my cousin (and other reviewers) also had issue with the dialogue. It sounds more like John Green talking rather than the characters. But around chapter 21, it became a bit better. When Hazel spoke, it sounded like her rather than overtones of the author. I could feel her emotions through the pages and I could relate. 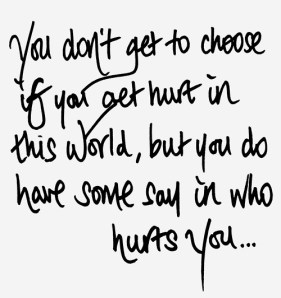 Apart from the dialogue, I found this story to be an okay read. I like that it’s not a love-at-first-sight story (well, maybe for Augustus) and that the characters take their relationship slow to develop something substantial. Of course, I love that they bond over a book—An Imperial Affliction. The inclusion of the book, which annoyingly ends in midsentence, is great in that it reveals what Hazel wants. She can invent her own ending since her letters to the author inquiring about the ending are unanswered. When she meets him, Peter Van Houten, she insists on learning the ending.

I like this moment in the book. It shows how desperate Hazel is to know what will become of her parents when she passes away. She needs reassurance and the author refuses to give her one. I find this similar to how some of us humans seek reassurance from God (data, fortune-tellers) on how our future, and those of whom we’re close to, will turn out. Hazel wants for the mother (in the fictional book) and the Tulip Man to be together after the daughter dies because that is what she hopes for her parents. She can handle the harsh truth that she will die but her love for her parents makes her hope for the best for their relationship after she passes.

Of the characters, Peter Van Houten was my favorite. When I realized this, I selfishly wondered what that says about me. Does it mean that I find oddballs and assholes appealing or that I too am somehow trying to numb some pain or erase a memory and I find familiarity in Peter Van Houten? The story perks up a bit when Van Houten is physically introduced. An ornery drunk was not what I was expecting but he does add some color to the story. I like that he is the opposite of what we expect. He isn’t some genius author but just a simple human being who wrote about his experience and is still suffering from it.

Another thing that stuck out was Hazel’s transformation. She blossoms as the story, and her relationship, progresses. We begin the story with her very dependent on her mother but by the story’s end, Hazel is independent and driving herself. And it’s all due to Augustus being in her life. He wakes her up. He lets her realize that she made cancer define her life and she should change that.

“Hazel Grace, like so many children before you—and I say this with great affection—you spend your Wish hastily, with little care for the consequences. The Grim Reaper was staring you in the face and the fear of dying with your Wish still in your proverbial pocket, ungranted, led you to rush toward the first Wish you could think of, and you, like so many others, chose the old and artificial pleasures of the theme park.”

—Although Augustus was trying impress Hazel with this soliloquy, I found it too preachy.

While Augustus is the opposite of Hazel, it was obvious that (SPOILER!!!) he would die. As a character, he was simply an impetus to get Hazel moving again, to help her find meaning in life. With him, she experiences love and has her first sexual encounter. Augustus was her equal, her soul mate, and it was sad to see him removed from the story. That said, I did not like Augustus’ character. Yes, he is a good person—friend, boyfriend, son—but I found it hard to connect with him, mainly because of the dialogue. I think another function of Augustus was to serve as the author’s direct voice in the text so I mostly heard, again, John Green and not the character, especially when he addresses Hazel with imperative sentences telling her how she should live her life.

Overall, TFIOS was a’ight. I didn’t find it a spectacular read as everyone claims it to be (my cousin didn’t either) but I do believe if the dialogue had fit the characters’ ages and remained consistent throughout, the story would be worthy of its hype. I didn’t cry while reading but there were some sad moments. This is the first book I’ve read by John Green and I plan to read his other works to get an idea of who he is as an author and his writing style. I am curious to know if the dialogue in his stories is always like that in TFIOS. Otherwise, I like him as an entertainer. I started watching his Vlogbrothers episodes on YouTube shortly before reading TFIOS and also his Mental Floss videos. They are both entertaining and Green (and his brother) talks very fast…or they probably just sped up the video. Anyways, cool dude.

Quote from the book:

“Sometimes you read a book and it fills you with this weird evangelical zeal, and you become convinced that the shattered world will never be put back together unless and until all living humans read the book. And then there are books…which you can’t tell people about, books so special and rare and yours that advertising your affection feels like a betrayal.”

The related articles below reflect a variety of views. Some enjoyed the story immensely while others found it to be an okay read.

7 thoughts on ““The Fault In Our Stars” by John Green”