A Moment in Time

I hate winter. I abhor the cold, the sniffles, and that tingly feeling I get in my fingers and toes when they’re numb. I loathe the fall in temperature and the rise in wind. And the burning sensation I get in my nose whenever I step outside that makes me want to sneeze. I dislike the ice, that slippery ice that I slide on, glide, as I fall while running for the bus. I hate winter.

The last pictures I took were three quick snapshots of snowy branches. I was waiting for the bus and was bored and agitated. Bored because I wanted to get back to reading The Fires of Heaven and agitated because a girl was smoking and spitting all over the sidewalk where I would have to walk when the bus arrives.

I was also upset with the weather—snow. Snow means ice and I hate both. I was huffing and puffing to myself as I tried to think of warmer moments in my life when I saw a man and his wife taking photos of the trees with their phones. It was then that I noticed the beauty around me. The trees were all spectacular with their bare branches, some dripping with icicles while others were simply decorated with snow. It wasn’t heavy snow but just enough to give the impression that the trees had somehow sprouted snowy leaves. With the light of the lamp posts shining behind a few, the branches would glitter as if decorated with crystals.

END_OF_DOCUMENT_TOKEN_TO_BE_REPLACED 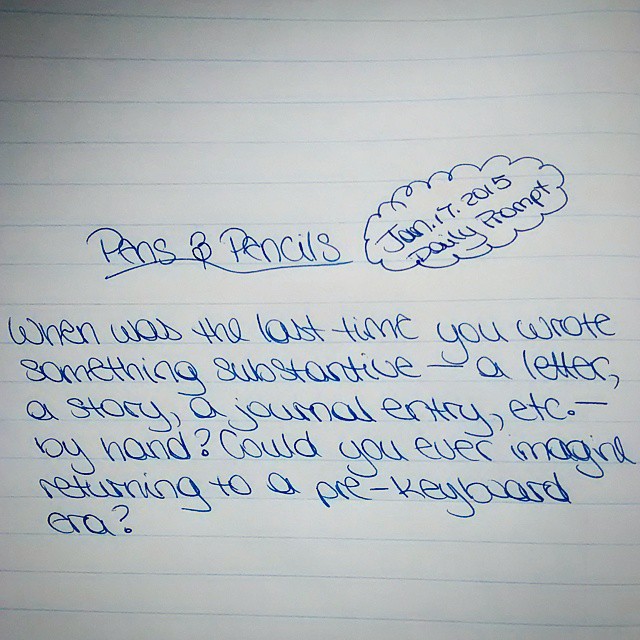 When was the last time you wrote something substantive — a letter, a story, a journal entry, etc. — by hand? Could you ever imagine returning to a pre-keyboard era?

I fantasize about writing with a pen—never a pencil. Always I would imagine myself sitting by an open window in the summer, inhaling the brine of the ocean down the road from my house (my fantasy house by sea) while writing a short story or a letter to some loved one. It’s a huge window and every now and then a blue jay or sparrow would perch upon its sill and chirrup at me as I write, encouraging me to continue with my thoughts. Whenever I fantasize about writing, it’s always handwriting, not typing.

The physical exertion involved in handwriting makes the act more personal, especially if it’s a letter or a journal entry being written. When I do write with a pen, it’s as if I’m leaving a part of myself on the page along with my thoughts. I think more exertion is required of us when handwriting, which makes the act all the more satisfying when completed. However, since handwriting is more physical, my hands are now out of shape since I do not handwrite often. Now whenever I write with a pen, I can only do so for a few minutes before I have to stop to rest my hand. These days I find it hard to imagine how writers managed to write hundreds of pages for hours by hand back in the day.

END_OF_DOCUMENT_TOKEN_TO_BE_REPLACED

“These little moments of unlocking, of finding the key to the puzzle, often manifest as first sentences. The first sentence establishes so much as far as tone, verb tense, point of view, even rhythm.”

“Beginnings are a mystery, but to me they’re the most exciting part of writing, when potential seems limitless and all those terrible, thorny problems that will pop up down the line can’t even be imagined.”

—Maggie Shipstead, from Biographile’s Write Start post, Maggie Shipstead on Writers’ Little Moments of Unlocking. Shipstead is a graduate of Harvard University and the Iowa Writer’s Workshop. She is also a former Wallace Stegner Fellow at Stanford University. Her first novel, Seating Arrangements (2013), was a New York Times bestseller, and her second novel, Astonish Me (2014), is now in stores.

The following are links to articles and announcements that I found interesting and thought you might too. Some are recent while others were posted back in December (yep, weeding through my emails again) but all are book/reading related.

First up is this post on Tor.com that is sure to excite all Wheel of Time fans. Tor plans to publish a Wheel of Time companion in November of this year. YEAHIEE!! According to the post on Tor.com, “Only a fraction of what author Robert Jordan imagined ended up on the page, the rest going into his personal files.” I hope this WOT companion will make us privy to what went into Jordan’s personal files. The post included a short list of what will be included in the book. I’m looking forward to detailed character descriptions, a chronological historical recount of the world (if possible), and lots of maps. I also hope that the art will be superb. I love the art in the A Song of Ice and Fire companion and the historical recount in it is not bad either though I wish they had waited until the series is complete to do a companion. Anyways, I’m only on book 5 of the WOT series but I’ll grab the companion as soon as it’s published!

Riverhead Books has revealed the cover of Elizabeth Gilbert’s upcoming book on creativity, slated to be published on September 22. It’s titled Big Magic: Creative Living Beyond Fear. It’s quite colorful. I’m more excited about fact that Gilbert is writing a book on creativity (I wasn’t aware) than about the cover. But it looks like the kind of cover that will grab my attention from across the room. According to Gilbert, the book is “basically a manifesto. It contains everything that I believe about creativity.” GalleyCat has more on the announcement.

I don’t do well with challenges. I certainly believe I’m behind on my Classics Club Challenge. But when I saw this challenge in my Book Riot e-newsletter, I couldn’t help wanting to join. I like how diverse it is. I will partake in Book Riot’s 2015 Read Harder Challenge. Here’s a bit on the creator’s—Rachel—intention: “I’ve included 24 tasks, averaging out to two per month, that will hopefully inspire you to pick up books that represent experiences and places and cultures that might be different from your own. We encourage you to push yourself, to take advantage of this challenge as a way to explore topics or formats or genres that you otherwise wouldn’t try.” Haven’t started yet but I’m looking forward to it!

END_OF_DOCUMENT_TOKEN_TO_BE_REPLACED

I’ve been a slacker. Back in 2013, I vowed to improve my knowledge of art and art history because they are subjects I love. I wish I had studied them while in college. Unfortunately life and procrastination has caused my efforts to self-instruct to dwindle.

In October 2014, I decided to push myself harder in my independent artistic studies. This new fervor was ignited by an article on Richard Estes on Smithsonian magazine’s website. I had no idea who Richard Estes was but the photo of his painting was enough to convince me to visit an exhibit of his work at the Smithsonian American Art Museum. The photo of his painting seemed to be a photo of a photo, and I disbelieved that it was of a painting. Hence my decision to visit the exhibit was more for proof than to gain any sort of artistic instruction.

After showing up at the wrong museum, I finally found my way to the Smithsonian American Art Museum and slowly browsed other paintings before visiting Estes’ exhibit. All the while, my music blasted in my ears (something by Jamaican dancehall artiste Vybz Kartel, which is probably highly out-of-place for a museum excursion) and I slowly danced from one painting to another until I danced up to the entrance to Estes’ exhibit.

I actually read this time. I usually don’t read much at museums, which means I miss a lot of useful information. Usually, I dance from painting to painting (I always have music blasting in my ears while at a museum), lingering over the ones I admire while wondering what drove the artist to create the piece, how did the artist apply his medium, and how long did it take to complete, amongst other thoughts. But this time I paused my music. I was enraptured by Estes’ work. The reason being that even with his huge canvas of the Brooklyn Bridge in front of me, I still found it hard to tell that his piece is a painting rather than a blown-up photo.

Richard Estes is a photorealist painter. He was born in Kewanee, Ill., and studied fine arts at the Institute of Chicago. After graduating, he moved to New York, where he worked as a freelance illustrator and graphic designer at various magazines. At night, he would work on his paintings, which later became his full-time career.

END_OF_DOCUMENT_TOKEN_TO_BE_REPLACED

As stated in my Reflection on 2014: Life post, 2014 was about progress. Although I did not post as much in 2014 compared to 2013, my blog has greatly improved. From the annual report that WordPress has graciously put together, I’ve learned that I’ve gotten more visitors this year. My followers have also increased, which I’m glad for. This is all due to my effort to both post more and seek activities that will help me improve my blog, such as the Blogging 101 workshop and partaking in a few Daily Post activities. I was also more social, visiting and commenting on other blogs. Overall, 2014 was a great blogging year. I’m proud of myself and I’m thankful for all the support, advice, comments, and follows. 😀

Now this post is actually about books and reading (so it will be long). And despite my intention to progress in all aspects of my life, I regressed in my reading. Actually, it depends on how you look at it. According to my Goodreads Reading Challenge, I didn’t reach my goal of reading 35 books in 2014. I only made it as far as 22 books. This much is true novel-wise. However, if you were watching over my shoulder throughout much of 2014, you would have realized that I met and surpassed my reading goal with magazines.

END_OF_DOCUMENT_TOKEN_TO_BE_REPLACED

The WordPress.com stats helper monkeys prepared a 2014 annual report for Zezee with Books.

A New York City subway train holds 1,200 people. This blog was viewed about 4,300 times in 2014. If it were a NYC subway train, it would take about 4 trips to carry that many people.

Thank you all for visiting, following, and commenting. I hope you continue to do so in 2015. 🙂 –Zezee