This year I decided to get into comics and anime. I’ve always been intrigued by them but for some weird reason, I’ve never immersed myself in the culture or even sampled bits of it. Prior to early May when I bought these comics, the only comics I’d ever read were Archie and Sabrina when I was a little kid. As for graphic novels, there were Maus I and Maus II (both of which I hope to collect soon) and The Rime of the Modern Mariner, a modern retelling of the famous poem, which I read a few years ago and enjoyed.

So with plans to read more comics, I sidled into Fantom Comics, a comic bookshop in Dupont Circle, to look around. The sellers were friendly and quickly shared recommendations of what I should get. Even the customers were eager to offer some input. I’m not interested in the superhero comics so I ended up getting these. Upon cashing out, I learned a harsh truth—comics are FRIGGIN expensive!

In this sci-fi/fantasy comic, two individuals from warring planets (well, a planet and its satellite) fall in love and have a kid. This volume is about them trying to escape the war and find a better place to raise their child. Both sides are against their union and both try to track them and kill them.

I LOVE this story. It’s very popular so you might have heard of the series, and you might think it’s overhyped but trust me, the hype is on point. You’re easily swept up in the story. It’s gripping and dramatic and, coupled with the illustrations, keeps you at the edge of your seat as you wonder what will become of Marko and Alana. The characters are off the friggin chains! They blew my mind, both how they look and how they act. Their morals, if they have any, often come into question and it’s not easy to tell how anyone might react.

The world, or worlds, are corrupted as the war spreads and infects everyone and thing it touches. Marko and Alana’s act—member from planets that despise each other fall in love and have a kid—can be interpreted as a sign of hope that there’s an end to this war and peace is possible. But those in control don’t want peace. How would they benefit? So they send their men and mercenaries to hunt the couple and kill them. To vanquish hope.

I really like the art but I don’t love it (probably because I read The Wicked + The Divine (see below) soon after this). The line work is kind of sketchy, which I like for this comic since it’s fast-paced and has lots of action. And the colors aren’t vivid, except for a handful of ghostly characters—it helps them to stand out,—but they work for the story’s setting.

I like how the characters are illustrated. I even think Marko is kinda hot. But the illustrations are crazy. There are girls composed of just legs and a huge smile and a female mercenary who reminds me of a black widow—she has the body of a spider from the waist down and has a shapely female body from the waist up complete with a sizable bosom. She has a pretty face but on it are eight eyes, which made me dizzy whenever I look at them. Characters range from people with horns, tails, or wings to those with a TV head, which are of an elite race (I presume). Btw, whenever Prince Robot IV speaks, I imagine his voice as that computerized voice used for robots in old TV shows—a bit halting and strained. By the way, Prince Robot IV has serious problems. And I don’t know why but The Will (first name is The) makes me think of America, probably because of the colors of his clothes.

I highly recommend it. Go buy it now, or rent it from your library. It is not for children. There are curse words, nudity, sex, and violence. But if you are a fan of the characters in The Song of Ice and Fire series (Game of Thrones TV show), you will love this comic.

“When a man carries an instrument of violence, he’ll always find the justification to use it.”

“Dude, you don’t steer a rocketship. You ride it.”

“Most of my childhood was spent clinging to the feathers of a dulled arrow blindly fired across a starless night.”

This one is a fantasy comic about a group of female mercenaries who fight to protect a town from attackers and maintain peace within it, though they’re the ones causing the ruckus. In this volume, someone has sent an assassin after them. Who could it be?

The story isn’t as great and dramatic as Saga but it’s humorous. If the plot doesn’t get you, the humor might and the antics of the characters certainly will. The introduction is awesome. I couldn’t help imagining some sort of background music and sound effects playing for certain frames.

The characters are sassy and funny. They’re not what you’d expect at all. These ladies love to drink, cuss, fight, and f—. I love them. I’d like to join their merry band, which includes cute little Betty, “a hippy smidgen thief” (she’s one of my favs); Violet, “the hipster dwarven fighter” (she tries to disrupt the tropes about dwarves); Hannah, “the rockabilly elven mage” (my least fav of the bunch); and Dee, “the Atheist human cleric” (my fav of the bunch. At first it was because she’s Black but I like her personality and that she seems to be a book nerd and not great at social events). Did I mention they’re great fighters? They’re amazing! I LOVE the fight scenes.

I also love the artwork (more so than Saga’s) and I like how the frames are ordered. Sometimes objects thrown in one frame would cross over into another. I also like how the characters are drawn. It’s a diverse cast not just in race but also in sexual orientation and physical size as well: Dee is curvy with a bootie, Violet is stocky, Betty is short (she’s a smidgen after all), and Hannah is slim. They’re all beautiful.

I will definitely continue with this series. The story fits me and it’s exactly what I needed. I’m glad I was told to pick this up. This one is also not for kids. There are curse words, drugs, and violence. But the characters are great and the art is good so I highly recommend it.

“Doubt isn’t weakness in faith, mother, it’s wisdom in spite of it.” 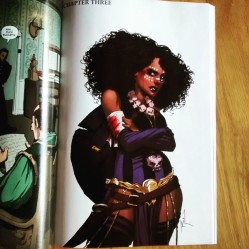 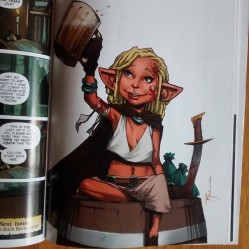 Rory Perkins is out one night chasing fireflies when she’s transported to another world and changed into a statue. She is awakened by a boy in another world or time where magic is outlawed and those who have such abilities were massacred, except the kids called “wicked children,” who are kept in an asylum. The boy, James, learns something new about himself, which places him in danger.

It’s the purple cover that attracted me and made me purchase it. This one isn’t my favorite of the bunch but I enjoyed it nonetheless. It started off slow and confusing but a few pages in it starts to pick up, though I was still a little confused about the world and how it operates. But I was entertained by James and Christian’s antics and thought Christian was kind of funny.

The art is okay. I didn’t like it much because it was hard to tell the ages of the young characters. I assumed that they are teenagers but sometimes they looked younger or older than their teen years. Also, the expressions sometimes didn’t the situation a character is in. For example, there were times when a character should be scared or shocked but didn’t look it. And the proportions of the characters threw me off sometimes.

By the end of the story, I was curious about what would happen to the characters. I would also like to learn more about this multi-dimension, time travelling world so I think I might continue with the series online. It’s a web comic.

“Heroes lead such lonely lives and drag everyone around them into the spiral.”

The Wicked + The Divine, Vol. 1: The Faust Act by Kieron Gillen, illus. by Jamie McKelvie

From the back cover: “Every ninety years twelve gods return as young people. They are loved. They are hated. In two years, they are all dead. It’s happening now. It’s happening again.” In this volume, the gods have returned as celebrities that resemble those popular today like Rihanna and Kanye. Our protagonist Laura, a bi-racial 17-year-old girl living in London, wants to acquire their fame. We watch as she gets entangled in their affairs as she tries to help out Luci (aka Lucifer).

I didn’t like this comic the first time I read it because I didn’t get it. I read it expecting something else and since I didn’t see it, I didn’t give it a chance but boy did I love the art! Of all the comics I’ve included in this roundup, this one has the best art by far. I love the cool colors and the sleek, thin, neat lines. It has a diverse cast of characters, and I love how they are drawn, especially the expressions on their faces. And the frames, oh the frames. I love the frames and the page spreads. My favorite is when we see Luci become a god. Oh, did I mention the colors? I did, but I’m going to say it again—I love the colors! Cool, bright, perfect. The colorist for this volume is Matthew Wilson.

As for the story, it’s interesting. I appreciated it more the second time I read it. This time I could see the little commentary it makes on our society’s worship of celebrity figures, which is what I was hoping for when I first read it but somehow missed it. We spend the most time with Laura and Luci. I’m not a fan of either but I enjoyed reading Luci’s dialogue. So sarcastic. Of the characters, I think The Morrigan is coolest. I love how she’s (they’re?) drawn as well as her (their) personality (-ies). The characters don’t embody all the characteristics and personalities of the god they claim to be; however, I like how parts of the mythologies are mixed in as well as the commentary provided on them and the bits of metafiction.

I love the artwork but I’m not a fan of the story, neither am I curious about it. Still, it’s possible that I’ll get the next volume because I really want to like it. I do recommend this comic though. There are many who enjoyed it, my brother did, and the artwork is incredible so you should experience that.

**A few examples of the comic are below but seeing them on screen doesn’t do them justice. You have to see these colors in person. They came out too bright on my phone.** 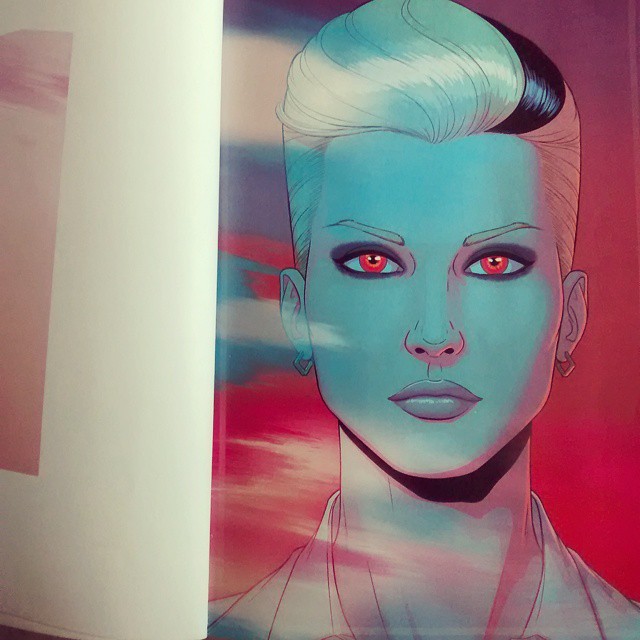 Lucifer. Look at those clean lines. My camera filter thing messed up the color. 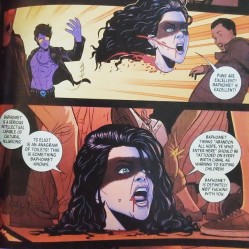 Love the frames, especially the bottom ones.

And there you have it: My first comics round-up. I didn’t expect it to be so long but I surprised myself. If you’ve read any of these, please leave your thoughts on them below. I also welcome any comics suggestions you may have.

18 thoughts on “Comics Roundup #1: four bad-ass chicks, a couple on the run, wicked kids, and gods having fun”