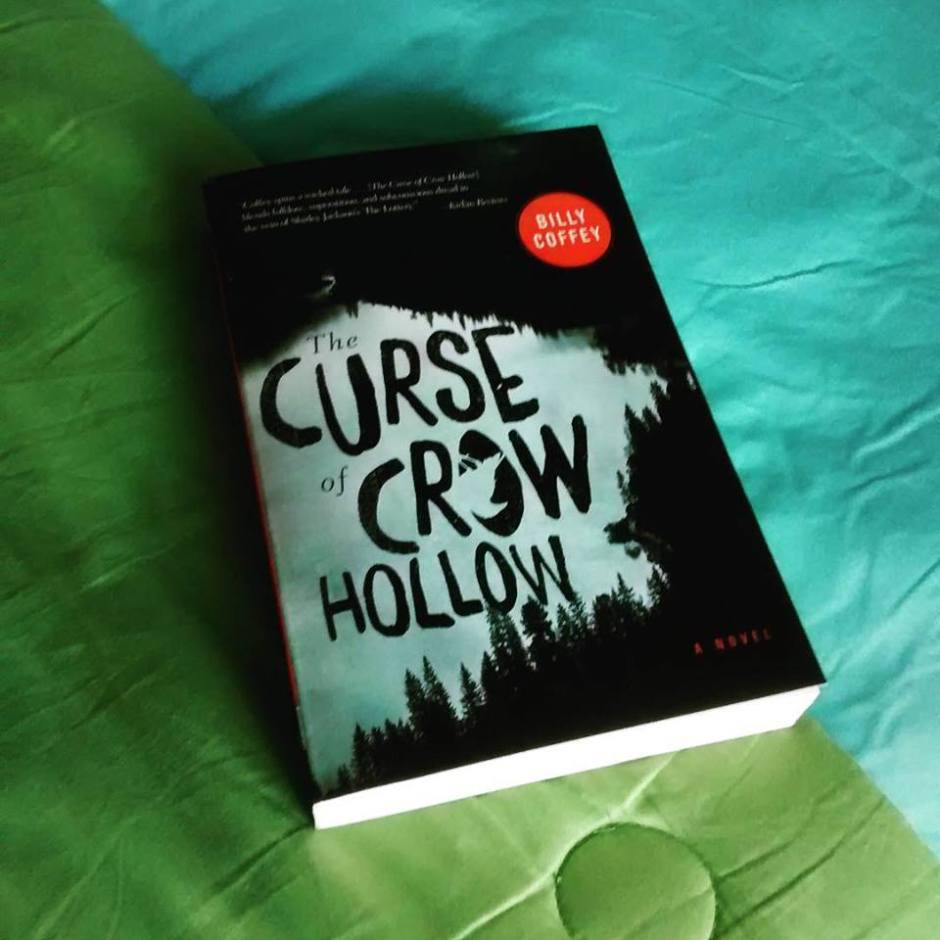 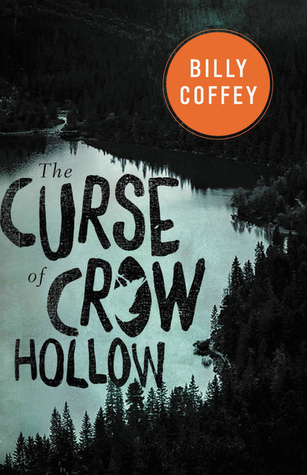 One of the best stories I’ve read this year. This one calls for people to take a closer look at themselves and their actions, and shows how people react when motivated by fear.

The Curse of Crow Hollow, which was recently published on August 4th, is a horror suspense story that touches on a variety of themes relating to religion and human nature.

It is about some weird occurrences that took place in a small town in Virginia. One night a group of teenagers went to hang out on a mountain that everyone in town usually bypasses because the witch Alvaretta lives there. Long ago, Alvaretta’s husband died but she believes he was murdered and she cursed the town for it. For years no one has bothered her or heard from her, but the morning after the teenagers’ mountain sleepover, one of the girls realize her mother’s bracelet was stolen by a creature that left behind weird hoof prints. They follow the prints to Alvaretta’s property, where they encounter the witch.

After an altercation, Alvaretta curses the teenagers who race back to town in a fright. Soon Alvaretta’s curse begins to take effect but it’s not just the teenagers who she’d cursed who’re affected, all the girls in town also begin to suffer from the curse. Though the town’s doctor tries to help, there’s little he can do to reverse it and soon fear spreads across the town as people begin to believe that Alvaretta has truly cursed them and there’s no way to reverse it.

I requested a copy of this book when I saw an advertisement for it in a Shelf Awareness newsletter. For some weird reason, I thought it would be a young-adult thriller so I was surprised when I saw that it’s from a Christian publisher. That put me off at first because I immediately assumed that it would be overly preachy. I know, it’s bad to assume but I can’t help it coming from a Christian background filled with overly preachy people trying to force their ideas on me. Anyways, I decided to give it a chance and didn’t bother looking it up on Goodreads because I wanted to go in blind. And I’m glad I did.

The Curse of Crow Hollow is a great story. It’s so well told that many a time I would forget that I’m reading a novel. The narrator’s voice is relatable and familiar and made me feel like someone was telling me a scary story instead of me reading one. The narrator relays the story by talking to an unnamed traveler who’s lost but somehow found her way to Crow Hollow. I always like this technique in stories but I believe this is the first that it’s made me forget that I’m reading a book. I think it’s a combination of the narrator’s language, which is written to match Southern colloquialism so the narrator pronounces Hollow as Holler, and how the narrator sometimes refers to the audience to engage them in his story that made me react so. Maybe that’s why or maybe it’s some story magic of Coffey’s, either way I was hooked and hardly put down the book except when I got scared.

“Fear’s the world’s way of reminding you of what you have.”

Yea, I got scared. Whatever. It’s a horror story and it’s actually not scary but I have an overactive imagination that gets crazy ideas at night so I had to put down the book sometimes to pace myself. Despite that, the fear is something I liked about story. It slowly creeps up on both you and the characters. It’s hard to pinpoint when the fear sprouted — maybe it was there all along just waiting for the right chance to take root — and whether what the characters fear is real or imagined. That blurriness between what’s real and what’s not is another thing I appreciated in the story for it’s hard to tell, while reading, whether or not Alvaretta is a witch and really laid a curse on the girls or if it’s fright that’s caused the odd reactions in the girls, as the town doctor believes.

I debated this the entire time I read because it’s not until the end that some things are explained. As I said, it’s hard to pinpoint when the fear took root; however, it’s easy to tell how it gained its strength. A combination of all things that made this story great helped to heighten the fear in both me and the characters. There’s the lore (Alvaretta the witch) followed by the gossips and secrets, which made it difficult to tell what’s true and what’s not, and even the church (the congregation and pastor and how religion and folklore are blended until they can’t be distinguished), that’s so quick to dish out judgement that it makes people anxious. The pacing also helped. The story isn’t fast paced in the beginning. It takes its time building, the fear in people mounting, the reader getting anxious, until all hell (almost literally) breaks loose and it’s all you can do to keep up as your eyes quickly flit across the page to race along with the story.

As the pace steadily increases, Coffey drops more clues along the way and includes more things for the townsfolk to fear. They were scared and worried when Alvaretta laid her curse, but fright overwhelms them when they learn that Alvaretta had let loose a monster to terrorize them (we don’t learn if this is true until the end) and, further, that one of their neighbors is helping her. While all this worries the characters, they increase the reader’s interest in the story because it was around this point that I began to wonder if the tale is more supernatural than I thought.

“But fear can make people do some awful things, and that’s what I’m scared of right now. Not Alvaretta. Us.”

But the God-fearing townsfolk’s reaction to this is nothing short of frightening…and interesting. When pushed to the limit, especially when it’s due to fear and anger, people sometimes commit heinous acts. At such times, we can become monsters ourselves and later be appalled that we are capable of doing such things. That’s what happened to Crow Hollow’s folk. In their race to erase their fear and find someone to blame for their crimes and the evil that resulted from them, they became monsters and hurt themselves, each other, their town, even more than Alvaretta and her supposed monster ever could. That part of the story, the unbecoming of the good folk, is some scary-ass shit.

“Ain’t it funny how we’re always the righteous when it comes to killing, and it’s everybody else who’s the devil?”

As for the characters, I liked none of them but I appreciate how realistic they are. They are gossipy and prideful and quick to pull down their neighbor to raise themselves higher. They are human, but it’s our horrible traits that stand out in them, especially when their fear peak. From how the characters react, I think the story calls for Christians, everyone actually (Christian or not), to take a closer look at themselves. We often believe that what we do is right, and use religion to justify our actions, but sometimes it’s good to consider if we’re the ones at fault. Likewise, the people of Crow Hollow are self-righteous and hardly pause to consider that what they do is wrong, that they might be sinners as well.

It’s one of the best stories I’ve read this year, and the faults I found in it did not damper my enjoyment. The faults? Well, there were a few inconsistencies but since I read an ARC copy, I chalked it up to that and hope they were fixed before the book was published. Also, there are many characters that were introduced quickly and in detail but weren’t central to the overall story. This confused me at times, especially since some weren’t referred to again until pages later when I’d already forgotten them, but it didn’t bother me much and didn’t interfere with my enjoyment. Plus, when I’m told stories (such as my aunt telling me about something from her childhood) the orator usually does that.

So, great story and I highly recommend you read it. I plan to try some of Coffey’s other books. I like his writing style in this one (it’s highly descriptive. Love that. Should have mentioned it earlier) and how it’s narrated. He just might be a new favorite author.

“…loneliness is a hell all its own.”

“Don’t matter if they’s the ugliest soul who ever drew a breath, the first one you fall for always remains beautiful to you in some way, and the memories you have of the time you spent together get colored over in soft shades as the years wear on.”

“They had their faith, sure, though my experience has been faith is something that blossoms and wilts in a life as easy as the corn in these fields.”

“It’s always easier to bear up under your misery when the person beside you’s as crushed as you are.”

“A man’s whole self is tied to his work. You take that work away, you cast him off with neither wind nor current and there he remains adrift, purposeless.”

“Love’s a crazy thing, is it not? One day you’re throwing rocks you’re so mad, the next you’re pining once more for the very thing that riled you.”

“All darkness needs to spread is for a bunch of people to stand around and do nothing.”

“People think they’re free in life. Maybe they are for a while. But sooner or later all the choices you make narrow down to a single end, and that’s the only end you can meet.”

“There’s no grace to a revival, only judgement, and maybe that’s the point of the whole thing. If a man of God can’t convince you to embrace heaven, I guess he figures scaring the hell out of you will accomplish the same thing.”

“But is there not a bit of night in even the brightest life? Is there not still a sinner’s heart beating inside every saint?”

“People always compare themselves to others. I guess it helps us know where we stand with everybody else. Problem is, every time we compare who we are to how we think someone else is, we always come up short. Somebody’s always better looking or richer or liked better. But when we gossip? That’s different. That’s the only way we can compare ourselves to somebody else and come out looking better than they are.”

“…religion turns to something else when paired with fear and hate.”

“Make no mistake on what I tell you, nothing carries the might of words. Give me sword or a gun, give me the power of death. Those things can only strike flesh and bone, friend. They can change neither nation nor world. But give me words and I may rule, for by them I reach the heart and the mind.”

Other thoughts on the book

19 thoughts on ““The Curse of Crow Hollow” by Billy Coffey”