Note: Since changing my web address, I realized that my posts weren’t showing in Reader. I had to re-add myself to fix that glitch so if you use Reader, please let me know if you’re able to see my posts in there. I submitted a query in the WordPress forum but haven’t received any replies on how to fix it.

At his wit’s end, Zacharias Wythe, freed slave, eminently proficient magician, and Sorcerer Royal of the Unnatural Philosophers—one of the most respected organizations throughout all of Britain—ventures to the border of Fairyland to discover why England’s magical stocks are drying up.

But when his adventure brings him in contact with a most unusual comrade, a woman with immense power and an unfathomable gift, he sets on a path which will alter the nature of sorcery in all of Britain—and the world at large… (Goodreads)

I first watched a review of this book in a YouTube video but after reading a review over at Lady Geek Girl and Friends, I added it to my TBR list. The story seems to be a hit or miss with readers but I’d like to read it and see for myself. It explores a variety of issues that I’m curious about.

Taking place nearly a century before the events of A Game of Thrones, A Knight of the Seven Kingdoms compiles the first three official prequel novellas to George R. R. Martin’s ongoing masterwork, A Song of Ice and Fire. These never-before-collected adventures recount an age when the Targaryen line still holds the Iron Throne, and the memory of the last dragon has not yet passed from living consciousness. (Goodreads)

Another book to tide us over as we wait for the next installment in the A Song of Ice & Fire series. Of course I want to read it! I’m currently rereading the books in the series in hopes that by the time I’m done rereading, Winds of Winter will be out and I can just hop to it.

We are introduced to Lady Mechanika, a half-human, half-mechanical woman who is trying to learn about her past. (Goodreads)

I learned about this in one of Kitty G’s videos and I really want to get it because I love the illustration on the cover.

A spine-tingling tale rooted in Caribbean folklore that will have readers holding their breath as they fly through its pages.

Corinne La Mer isn’t afraid of anything. Not scorpions, not the boys who tease her, and certainly not jumbies. They’re just tricksters parents make up to frighten their children. Then one night Corinne chases an agouti all the way into the forbidden forest. Those shining yellow eyes that followed her to the edge of the trees, they couldn’t belong to a jumbie. Or could they?

When Corinne spots a beautiful stranger speaking to the town witch at the market the next day, she knows something unexpected is about to happen. And when this same beauty, called Severine, turns up at Corinne’s house, cooking dinner for Corinne’s father, Corinne is sure that danger is in the air. She soon finds out that bewitching her father, Pierre, is only the first step in Severine’s plan to claim the entire island for the jumbies. Corinne must call on her courage and her friends and learn to use ancient magic she didn’t know she possessed to stop Severine and save her island home.

With its able and gutsy heroine, lyrical narration, and inventive twist on the classic Haitian folktale “The Magic Orange Tree,” The Jumbies will be a favorite of fans of Breadcrumbs, A Tale Dark and Grimm, and Where the Mountain Meets the Moon. (Goodreads)

I forgot where I discovered this one but it’s based on Caribbean folklore and is by a Trinidadian author and those two reasons were enough for me to want to read it. I’d like to read more fantasy stories by authors of Caribbean and African descent so if you know of any, let me know.

In a vast, mysterious house on the cliffs near Dover, the Silver family is reeling from the hole punched into its heart. Lily is gone and her twins, Miranda and Eliot, and her husband, the gentle Luc, mourn her absence with unspoken intensity. All is not well with the house, either, which creaks and grumbles and malignly confuses visitors in its mazy rooms, forcing winter apples in the garden when the branches should be bare. Generations of women inhabit its walls. And Miranda, with her new appetite for chalk and her keen sense for spirits, is more attuned to them than she is to her brother and father. She is leaving them slowly –

Slipping away from them –

And when one dark night she vanishes entirely, the survivors are left to tell her story.

“Miri I conjure you “

This is a spine-tingling tale that has Gothic roots but an utterly modern sensibility. Told by a quartet of crystalline voices, it is electrifying in its expression of myth and memory, loss and magic, fear and love. (Goodreads)

I discovered this one in a YouTube video as well. I haven’t read a book by Oyeyemi as yet but I’m looking forward to it. Plus, that is such a beautiful cover. 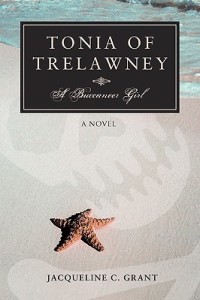 In the charming novel “Tonia of Trelawney,” two young girls set sail upon treacherous and pirate-infested seas to escape the tyranny of an angry slave master. Author Jacqueline C. Grant paints a vivid picture of life on a sugar plantation in seventeenth-century Jamaica. In 1670, Tonia, a young slave girl, lives at the Trelawney Sugar Estate on the island of Jamaica. She thinks this is the only life she will ever lead until she forms an unlikely friendship with an English girl named Maggie, whose family recently moved to Jamaica.

For reasons unknown to Tonia, Master William, the plantation owner’s nephew, hates her. She longs for nothing more than to buy her and her mother’s freedom so they can flee from William’s cruel authority. Tonia and Maggie devise a daring plan to leave Trelawney by disguising themselves as boys. By hiding in hogshead barrels being sent to the port for shipping, Tonia and Maggie escape from the plantation and set off on their journey to find the great pirate Henry Morgan and hire on as part of his crew.

“Tonia of Trelawney” tells the adventurous tale of two brave girls who become the most unlikely of buccaneers. Come along on their turbulent voyage as they learn the ways of the ocean and reach beyond the limits of their strength and courage. (Goodreads)

I forgot where exactly I learned about this one but it’s set in Jamaica and I believe it is by a Jamaican author as well. Plus, it’s an adventure story about girls so I’m happy for that.

7 thoughts on “Wishes for My TBR Pile #9: Fantasy and Folklore”