Warren the 13th and the All-Seeing Eye is an illustrated middle-grade novel about a 12-year-old orphan, Warren, who maintains his family’s hotel. The hotel fell into disrepair since Warren’s lazy uncle Rupert took over after Warren the 12th died. Despite its dilapidated state, Warren takes pride in the hotel and tries his hardest to improve its condition. But his attempts are thwarted by his evil Aunt Anaconda who rips the hotel apart as she searches for the All-Seeing Eye, rumored to be hidden somewhere in the hotel.

Soon the hotel is overrun with guests who are also interested in finding the All-Seeing Eye and it’s all Warren can do to keep the hotel together as the guests rip it apart in their search. Knowing that his aunt wants the All-Seeing Eye for nefarious means, Warren joins the search with his friends hoping to locate it before his aunt does.

I requested an ARC of this book after seeing it featured in Shelf Awareness’s Maximum Shelf newsletter. Though I was happy to receive it, my life was so busy at the time that it took me two days to read the book and I’m just getting around to the review.

What made me want to read this book? The story. It sounded like it would be fun — a treasure hunt of sorts in an hotel — and I liked the interview in the newsletter where del Rio and Staehle discuss how the idea for Warren the 13th came about. I also wanted to know why Warren is toad-faced. It’s his most distinct feature and one of the first things I learned about him when I read the article. I didn’t find that out in this book but maybe I will in the next. Warren’s adventures will continue.

As for the story, it was okay. I wasn’t blown away by it, but it was easy to read and quick to get through (if you’re not frequently interrupted). The illustrations helped to liven the story and the odd characters were fun to read about. The story isn’t outstanding and is a bit dry in spots, but it is one that kids will have fun reading as they try to solve the puzzles (riddles and a letter that can only be read in front a mirror) with Warren to locate where the All-Seeing Eye could be.

Some characters are entertaining, like Captain Grayishwhitishbeard, and their antics sometimes elicit a chuckle or two, while others are quite mysterious so we don’t know if they can be trusted when we first meet them. I liked Warren. His most defining trait is that he is hardworking and dedicated to whatever he puts his mind to. I liked that about him, that he tries his best to care for what he loves the most — the hotel. I also liked Petula. I wasn’t sure what to make of her when she appeared and I liked that she’s not what or how I expected her to be.

As for the illustrations, they are superb. I LOVE them! I think they are the best thing about the book. They are eye-catching and beautiful and I spent much of my reading time simply staring at them. The illustrations are done only in black, red, and white, the red used to highlight certain objects in a scene. In the article from the Shelf Awareness newsletter, Will Staehle described the style of the book as Victorian. The book’s pages have a two-column format, similar to newspaper columns, with numerous illustrations spread throughout, some quite small, such as highlighting a character’s exclamation, to large ones that take up two pages. It’s wonderful.

A fun read that I recommend to kids. Adults who enjoy reading children’s books might be interested as well, but I think they will be more captivated by the illustrations than the story.

And just so you can see how superb these illustrations are, here are a few pages from the book: 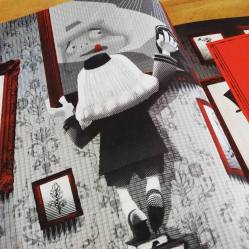 A close-up of our hero.

I love the shading.

The hotel, the Warren.

One of my favorite illustrations in the book. I like the reason for her tattoos.

I really like Will Staehle’s work. A few recent ones you might be familiar with include the covers for All the Birds in the Sky by Charlie Jane Anders, I Am Radar by Reif Larsen, Armada by Ernest Cline, and A Darker Shade of Magic by V.E. Schwab.

Tania del Rio is also awesome. She worked with Archie Comics as the writer and artist for Sabrina the Teenage Witch and also worked on Sonic the Hedgehog and Josie and the Pussycats. She has worked with Marvel and Dark Horse Comics as well.

4 thoughts on ““Warren the 13th and the All-Seeing Eye” by Tania del Rio, illus. by Will Staehle”