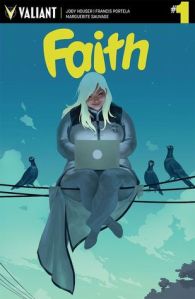 — I discovered this in a Book Riot podcast, video, or article. I can’t recall which. It sounds like something I might enjoy.

Orphaned at a young age, Faith Herbert — a psionically gifted “psiot” discovered by the Harbinger Foundation — has always aspired to greatness. But now this once ordinary teenager is taking control of her destiny and becoming the hard-hitting hero she’s always known she can be — complete with a mild-mannered secret identity, unsuspecting colleagues, and a day job as a reporter that routinely throws into her harms way! Well, at least she thought it would… When she’s not typing up listicles about cat videos, Faith makes a secret transformation to patrol the night as the City of Angels’ own leading superhero — the sky-soaring Zephyr!

But flying solo is going to be tougher than Zephyr ever thought when she uncovers a deep-rooted alien conspiracy. Two-bit burglars and car thieves are one thing, but when the world needs a hero to stave off a full-blown extraterrestrial invasion, will Faith find herself in over her head…or ready for her biggest challenge yet? (Goodreads) 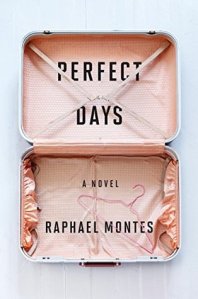 — Because I heard it’s similar to You by Caroline Kepnes and is set in Brazil.

A twisted young medical student kidnaps the girl of his dreams and embarks on a dark and delirious road trip across Brazil in the English-language debut of Brazil’s most celebrated young crime writer. (Goodreads) 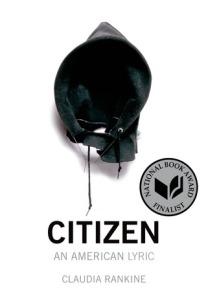 — I watched a review of it on booktube that sparked my interest and made me want to read the book.

Claudia Rankine’s bold new book recounts mounting racial aggressions in ongoing encounters in twenty-first-century daily life and in the media. Some of these encounters are slights, seeming slips of the tongue, and some are intentional offensives in the classroom, at the supermarket, at home, on the tennis court with Serena Williams and the soccer field with Zinedine Zidane, online, on TV-everywhere, all the time. The accumulative stresses come to bear on a person’s ability to speak, perform, and stay alive. Our addressability is tied to the state of our belonging, Rankine argues, as are our assumptions and expectations of citizenship. In essay, image, and poetry, Citizen is a powerful testament to the individual and collective effects of racism in our contemporary, often named “post-race” society. (Goodreads) 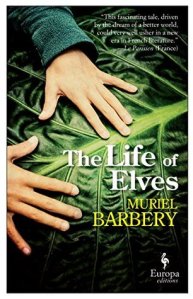 — The synopsis makes me think of The Last Days of Magic by Mark Tompkins, which I’m currently reading.

A moving and deeply felt homage to the power of nature and art by one of the world’s most beloved authors.

Do two young girls have the power to change the world? Maria, raised by powerful older women, lives in a remote village in Burgundy, where she discovers her gift of clairvoyance, of healing and of communicating with nature. Hundreds of miles away in Italy, Clara discovers her musical genius and is sent from the countryside to Rome to nurture her extraordinary abilities.

Who are the mysterious elves? Will they succeed in training the girls for their higher purpose in the face of an impending war? Barbery’s The Life of Elves is the story of two children whose amazing talents will bring them into contact with magical worlds and malevolent forces. If, against all odds, they can be brought together, their meeting may shape the course of history. (Goodreads) 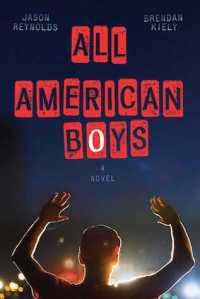 All American Boys by Jason Reynolds and Brendan Kiely (September 29, 2015)

— I heard some buzz around this book when it came out, but I didn’t tune in to it. I didn’t think it would be a book I might like. But now I’m curious about it after watching a review on booktube.

That’s the sidewalk graffiti that started it all…

Well, no, actually, a lady tripping over Rashad at the store, making him drop a bag of chips, was what started it all. Because it didn’t matter what Rashad said next—that it was an accident, that he wasn’t stealing—the cop just kept pounding him. Over and over, pummeling him into the pavement. So then Rashad, an ROTC kid with mad art skills, was absent again…and again…stuck in a hospital room. Why? Because it looked like he was stealing. And he was a black kid in baggy clothes. So he must have been stealing.

And that’s how it started.

And that’s what Quinn, a white kid, saw. He saw his best friend’s older brother beating the daylights out of a classmate. At first Quinn doesn’t tell a soul…He’s not even sure he understands it. And does it matter? The whole thing was caught on camera, anyway. But when the school—and nation—start to divide on what happens, blame spreads like wildfire fed by ugly words like “racism” and “police brutality.” Quinn realizes he’s got to understand it, because, bystander or not, he’s a part of history. He just has to figure out what side of history that will be.

Rashad and Quinn—one black, one white, both American—face the unspeakable truth that racism and prejudice didn’t die after the civil rights movement. There’s a future at stake, a future where no one else will have to be absent because of police brutality. They just have to risk everything to change the world.

Cuz that’s how it can end. (Goodreads) 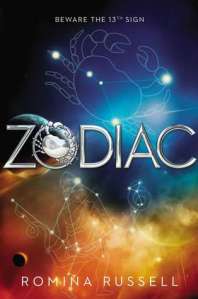 — I just like the title and the pretty colors on the cover. I think I might not enjoy it, though, because it sounds as if it will be like all other YA sci-fi/fantasy books except with zodiac signs.

At the dawn of time, there were 13 Houses in the Zodiac Galaxy. Now only 12 remain….

Rhoma Grace is a 16-year-old student from House Cancer with an unusual way of reading the stars. While her classmates use measurements to make accurate astrological predictions, Rho can’t solve for ‘x’ to save her life—so instead, she looks up at the night sky and makes up stories.

When a violent blast strikes the moons of Cancer, sending its ocean planet off-kilter and killing thousands of citizens—including its beloved Guardian—Rho is more surprised than anyone when she is named the House’s new leader. But, a true Cancerian who loves her home fiercely and will protect her people no matter what, Rho accepts.

Then, when more Houses fall victim to freak weather catastrophes, Rho starts seeing a pattern in the stars. She suspects Ophiuchus—the exiled 13th Guardian of Zodiac legend—has returned to exact his revenge across the Galaxy. Now Rho—along with Hysan Dax, a young envoy from House Libra, and Mathias, her guide and a member of her Royal Guard—must travel through the Zodiac to warn the other Guardians.

But who will believe anything this young novice says? Whom can Rho trust in a universe defined by differences? And how can she convince twelve worlds to unite as one Zodiac? (Goodreads)

— Didi from Brown Girl Reading reviewed these on her YouTube channel (see video below) a few days ago and I liked what she said about them. The one by Ruth Ozeki really caught my attention because of how long she stared at her face and how she went about writing her section.

What did your face look like before your parents were born? In The Face: A Time Code, bestselling author and Zen Buddhist priest Ruth Ozeki recounts, in moment-to-moment detail, a profound encounter with memory and the mirror. According to ancient Zen tradition, “your face before your parents were born” is your original face. Who are you? What is your true self? What is your identity before or beyond the dualistic distinctions, like father/mother and good/evil, that come to define us? (Goodreads)

In The Face: Cartography of the Void, acclaimed poet, novelist, and screenwriter Chris Abani has given us a brief memoir that is, in the best tradition of the genre, also an exploration of the very nature of identity. Abani meditates on his own face, beginning with his early childhood that was immersed in the Igbo culture of West Africa. The Face is a lush work of art that teems with original and profound insights into the role of race, culture, and language in fashioning our sense of self. Abani’s writing is poetic, filled with stories, jokes, and reflections that draw readers into his fold; he invites them to explore their own “faces” and the experiences that have shaped them. (Goodreads)

With his entry into Restless Book’s The Face series, award-winning novelist Tash Aw explores the panoramic cultural vitality of modern Asia through his own complicated family story of migration and adaptation. From a taxi ride in present-day Bangkok, to eating Kentucky Fried Chicken in 1980s Kuala Lumpur, to his grandfathers’ treacherous boat journeys to mainland China in the 1920s, Aw weaves together stories of insiders and outsiders, images from rural villages to megacity nightclubs, and voices in a dizzying variety of languages, dialects, and slangs. (Goodreads) 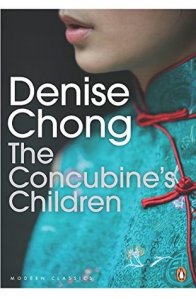 — I forgot where or how I found out about this, but I did and I’m interest.

The Concubine’s Children is the story of a family cleaved in two for the sake of a father’s dream. There’s Chan Sam, who left an “at home” wife in China to earn a living in “Gold Mountain”—North America. There’s May-ying, the wilful, seventeen-year-old concubine he bought, sight unseen, who labored in tea houses of west coast Chinatowns to support the family he would have in Canada, and the one he had in China. It was the concubine’s third daughter, the author’s mother, who unlocked the past for her daughter, whose curiosity about some old photographs ultimately reunited a family divided for most of the last century. (Goodreads)

Have you read any of these books? What books did you recently add to your TBR?

One thought on “Sunday Funday: Wishes for My TBR Pile #14”