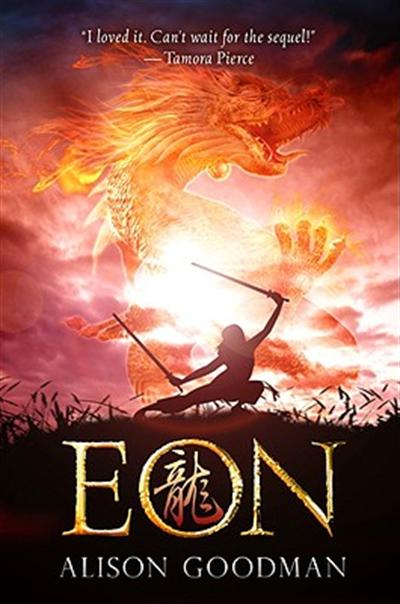 I read this for the Authorathon readathon back in April. My plan was to read Eon and immediately start on its sequel, Eona, but I had so many thoughts when done with Eon that I was unable to move on to Eona until I’d jotted down my thoughts. I debated posting a review since I don’t always review books I reread if I’ve already posted a review of it on here, but there are many things I want to point out and hopefully encourage others to read this book that I decided to post a new review. I’ll leave my old one up because I like revisiting my old thoughts.

The summary here is the same that I used in my old review:

Eon is about a girl masquerading as boy so that she can train in the arts of dragon magic. Set in a culture similar to the Chinese, Eon must work to become apprentice to one of the eleven Dragoneyes (masters) that are connected to the dragons: Ox, Tiger, Rabbit, Dragon, Snake, Horse, Goat, Monkey, Rooster, Dog, Pig, Rat. There are twelve dragons, each for a particular cardinal point, but the Dragon dragon has not been seen for several years and is believed to have disappeared. There is no Dragoneye for the Dragon dragon.

Only men are allowed to train to become an apprentice and gain the title of Dragoneye, hence Eon’s disguise as a boy. At the time when Eon decides to compete for the position of apprentice, the Rat dragon is in ascendant. This occurs at the beginning of the year and the Dragoneye connected to the ascending dragon will be most powerful for that entire year. As luck would have it, Eon is almost picked as apprentice for the Rat dragon, but things do not go as planned and something unexpected occurs.

Being a reread, I was surprised and glad when I found myself eager to read and continue reading this story when I started. I reread books a lot, but not all stories stand up well to a second read. Some are only fresh when read once. Of course, there might be a reason for me reacting this way which is that on my first read I sought only to be entertained. I wanted to read a story that’s reminiscent of the Song of the Lioness quartet by Tamora Pierce and Eon satisfied that need, but I didn’t look far beyond mere enjoyment when I read so I was quickly let down some when the story dragged in the middle.

However, this time around I didn’t expect anything of the story. I just wanted to re-read it to refresh my memories before moving on to Eona, and I think that was the best thing I could have done. It’s often best to read a book without expectations and allow yourself to be amused and amazed by what its contents reveal. I’m glad that I started the story in this way and left it with much more than being entertained.

Spoilers beyond. I think they’re minor. But if you’d rather skip them, just hop on down to the Overall section.

There are several things I failed to mention in my first review: the diverse cast of characters, the focus on inequality in society, and even how the magic system is handled. Despite being a person of color, I don’t always read with diversity in mind. Sometimes I might look for representations of myself in the stories I read, but I’ve gotten so used to not seeing myself there that I don’t bother looking anymore. This is why I appreciate the push for more diverse books and authors and characters because it is encouraging for people, especially the young ones, to see themselves represented, positively, in the materials they read. Positive representation helps to build a positive sense of self.

Such is true not only in our society, but also in the society in which Eon resides. Part of the reason why she has such a low sense of self throughout much of the book is because she is taught, and her society enforces the view, that women are weak and worthless. No way could a woman be a dragoneye and handle the immense power that the dragon shares with its human conductor. Such views of women are so steeped in this society that even though Eon is surrounded by strong women, she sees them all as weak. And further, at the end when she is revealed as female, those who helped her and saw her as a leader for their revolution lost faith in her capabilities because she’s female. [I was so angry at the characters there.]

Women have no power and little agency in the story so Eon tries her best to hide her sex and even to snuff it out. Often, she regards her body as the enemy, not only because it is deformed, but because it is female and reacts according to its nature by bleeding every month. [I have a love-hate relationship with my period so I can relate to Eon here, kinda. If only it would leave the pain behind. If only.] She even goes so far as to alter her energy by increasing the male energy in her and decreasing the female energy. And because there is no one in the story to counsel her otherwise, we spend much of the story wanting to shake some sense into Eon because it’s pretty easy to figure out that the only way to contact her dragon is to be truthful about who she is and admit what she is.

In that way, it seems that the dragons take from the dragoneyes what they covet the most. Hiding her identity helped her to survive in her society, so Eon fiercely protected that secret. But to be joined with her dragon, she had to abandon her male identity. However, the entire time I read, I wondered what was taken from her master. I got the impression that he was a eunuch or was in some way unable of performing sexually as a man. Maybe the tiger dragon took his sexual prowess…? The reason why I say this is because I got the impression that he sometimes touched Eon inappropriately and was attracted to her; but often he said that he’s no longer capable of such things. I’m not sure if this reasoning is correct, and it’s something I considered the first time I read the story too, but those interactions were a bit vague in the book and led me to this sorta-conclusion.

But back to Eon, or rather, Lady Jila, the only truthful person in the story. Through Lady Jila and several other characters, Goodman introduces gender fluidity into the story. Lady Jila is called a contraire in the story, which is a word used to describe a man who lives like a woman. [I typed the word into Google and handy-dandy Google Translate told me it’s a French word meaning opposite.] She has a man’s body but a female spirit. And despite the danger of living in a society that is not accepting of contraires, Lady Jila refuses to lie about who she is. I don’t know much about eunuchs but I found it interesting that once cut the man begins to lose his maleness and seems to become more female. I think that was mentioned in one of the Song of Ice and Fire books too. But the gender fluidity in this story, and especially Lady Jila’s relationship with Ryko, makes me think of Cereus Blooms at Night by Shani Mootoo [which I need to reread].

Deformity is also despised in this society so Eon is often criticized and sometimes shunned and bullied because of her limp, due to a crushed hip. However, it’s via her friend Chart that we see how those with disabilities are treated in that society. Those with deformities and disabilities are seen as evil and are sometimes removed of their humanity by being referred to as “it” and being ill-treated. Though I was relieved when Eon finally joined with her dragon [because I wouldn’t be able to stand reading several more pages of doubts], I was glad and a little annoyed at the same time when it also cured her of her limp. I mean I expected it would happen and was glad that it did because her hip caused a lot of pain, but it made me wonder if fantasy characters are always magically healed of their disabilities if it’s the protagonist. A similar thing occurred in the Inheritance Cycle by Christopher Paolini and it annoyed me there too. I find such occurences as only convenient for the progression of the story. The only exception I can think of at the moment is in the Song of Ice and Fire when Jaime Lannister loses his sword hand. But then again, he was disabled to cause him to change, to humble him. Still, I like that he didn’t find a magic hand hiding about the Red Keep somewhere to conveniently help him.

This is longer than I wanted it to be so just a few more things. First, I’m really curious about the magic system of this story. Why can Eon easily see the dragons whenever she uses her spirit vision? Can they always be seen no matter where they are in the country or world, or does she use an unknown force to pull them to her whenever she uses her spirit eyes? Also, gods are mentioned throughout and the dragons are spiritual beings; does that mean their gods can sometimes manifest in their world? Can an elevated dragoneye commune with them?

And second, the first time I read this book, I overlooked Eon’s motivation for becoming dragoneye and wanting to remain so. But this time I realized that she does it all for her family — Chart and his mom — and the people she has grown to care for.

Great re-read and again I highly recommend the book to all. It is a bit similar to the Song of the Lioness so if you like that or stories where the girl must overcome strictures placed on her femininity or stories where the protagonist gradually grows stronger as she learns more about herself, then you’ll enjoy this.

And if you want switch up your fantasy reads and go for one set in a Chinese-influenced culture with dragons that are more spiritual than physical, then pick up this book. I look forward to Eona and I hope it’s just as good.