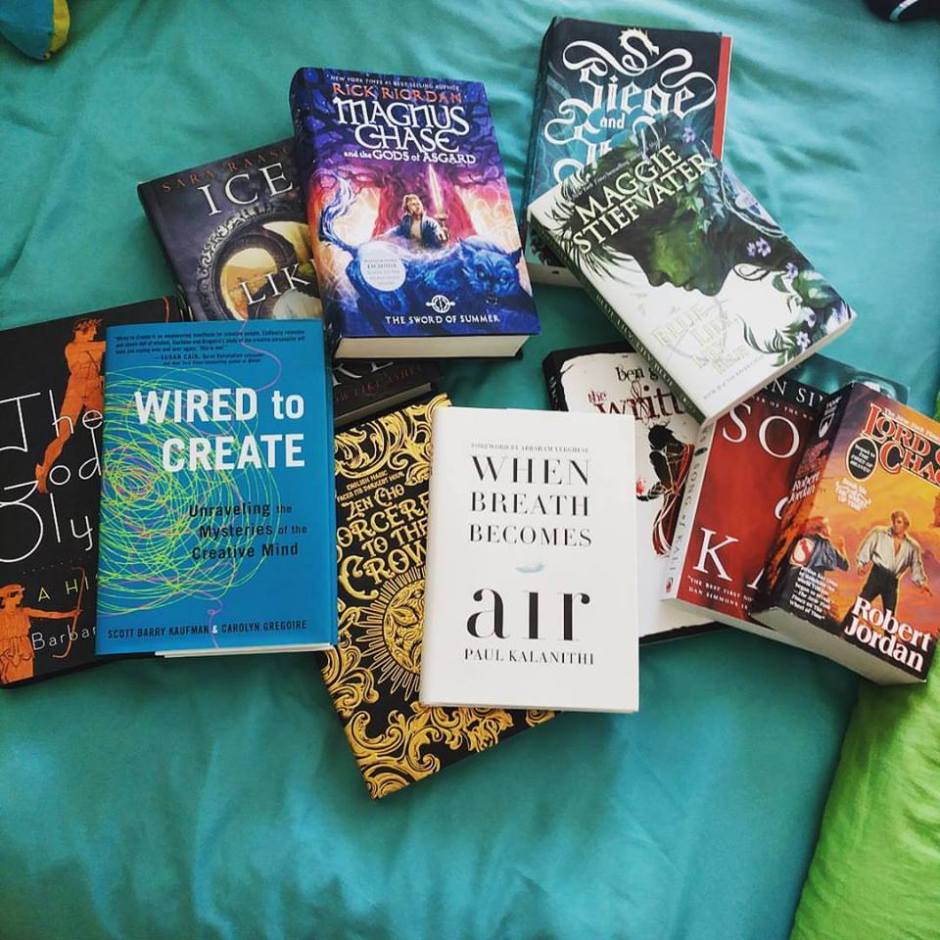 I recently found myself between books and indecisive about what to pick up next so I decided to try this tag that I found on Amanda Center, a booktube channel. The tag was perfect for helping me to decide what to read next. The only drawback is that I wanted to start reading more than one book immediately. The tag was created by Malia at BookParadise, another booktuber. The guidelines are as follows:

Read up to the first chapter, prologue included.

Decide if you’ll complete it or set it aside.

I was really excited about doing this tag. A little too excited, actually, because I decided to choose from a sample of 11 books. I’ve decided that I will choose 1 nonfiction book, 1 long-ass book, and 1 quick read. They are:

Wired to Create by Scott Barry Kaufman and Carolyn Gregoire

The Gods of Olympus by Barbara Graziosi

Lord of Chaos by Robert Jordan

Song of Kali by Dam Simmons

The Written by Ben Galley

Siege and Storm by Leigh Bardugo

The Sword of Summer by Rick Riordan

Sorcerer to the Crown by Zen Cho

Thoughts on the nonfiction ones:

I picked up this first because I’ve wanted to read it since I first heard of it. It’s about creativity and the various traits creative people share. I read the foreword and introduction and liked what I read there. Actually, I liked it so much that I had to buy my own copy because I initially borrowed the book from the library. I think it’ll be a quick read because it’s short for a nonfiction book.

Here’s another I’ve wanted read for a while now. I was a bit on edge while reading it because of how the prologue is written. It’s obvious Kalanithi had an idea of what ailed him but he put off acknowledging it and when he does, it’s emotional. I was a little emotional. I like how it’s written and when I moved on to other tasks, the prologue stuck with me and I kept thinking about it. I also read the foreword, which I think would have been best for me to read after I’d read what Kalanithi wrote.

The Gods of Olympus

It’s basically a history book. I read the foreword and introduction. The topic interests me and I learned a lot from just those two sections. I’m eager to learn more.

Hmm… I think I’ve lost interest in the Wheel of Time series. The prologue is long at 73 pages and I got sleepy while reading and gave up after 12 pages. The progress is sooo sloooow. And I’m frustrated and tired of the characters and ugh! I’d prefer to read a summary of what happens next. I really want to know what happens but I can’t stand Robert Jordan’s writing anymore.

This is also a fantasy novel. I bought it last year because a booktuber said it’s great but I don’t think it’s written well and though some exciting things occur in the first chapter, they didn’t entice me. I think sometimes the writing got in the way, such as the many references to the unnamed characters in the scenes as “the tall mage” or “the stranger”. It distracted me.

O.M.G!!! (as my mom would say) I want to keep reading. The dreamy quality seen in the first book, The Raven Boys, is back in the prologue of this one and I hope it continues throughout. I only read the prologue. I’m too excited to read the first chapter. If I read that, I’ll stick with the book. I’ve missed the psychics so much: Calla, Persephone, Maura.

I read the prologue and first chapter. It’s a slow build. Not impressed. Might have lost interest in the series.

The Sword of Summer

I read the first chapter and enjoyed it. I prefer Magnus’s voice more than that of the characters in Riordan’s other books. The voice is more mature. My interest is piqued so I’ll have to read this very soon.

I read chapter one and boy, do I love the passion between Meira and Theron! It’s another slow build, but I’m interested and could feel myself getting back into the groove of the story. I really like Meira: all independent lady and stuff.

Sorcerer to the Crown

I decided to give this a shot because it’s the book of the month for the Diverse SFF Book Club. I love readalongs but I suck at them 😛 I’m gonna try to keep up with this one, though. I read the prologue of this one and, like Blue Lily, Lily Blue, I enjoyed it so much that I refused to read the first chapter until I’m ready to read the book. I like how the dialogue is written and also the build-up in it.

So, what did I decide to read?

These books lingered. I kept thinking about them long after I’d read their samples. The Short Read was a tough decision because it was a tie between Blue Lily, Lily Blue and Sorcerer to the Crown; but I’ll get through Stiefvater’s book quickly and still have time to get to Sorcerer to the Crown in time for the readalong.

And after those, I’ll most likely hop to the second runners up: Wired to Create and The Sword of Summer.

11 thoughts on “Try a Chapter Tag”