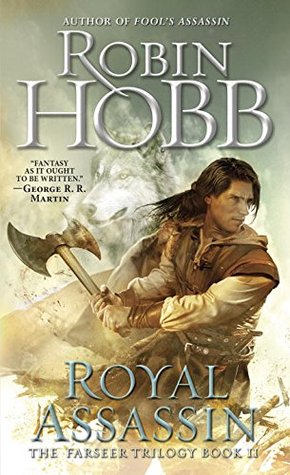 Not long after completing the first book in the Farseer trilogy, Assassin’s Apprentice, I picked up the second, Royal Assassin, and was glad to find it just as great as the first.

Fitz has survived his first hazardous mission as king’s assassin, but is left little more than a cripple. Battered and bitter, he vows to abandon his oath to King Shrewd, remaining in the distant mountains. But love and events of terrible urgency draw him back to the court at Buckkeep, and into the deadly intrigues of the royal family.

Renewing their vicious attacks on the coast, the Red-Ship Raiders leave burned-out villages and demented victims in their wake. The kingdom is also under assault from within, as treachery threatens the throne of the ailing king. In this time of great danger, the fate of the kingdom may rest in Fitz’s hands—and his role in its salvation may require the ultimate sacrifice.