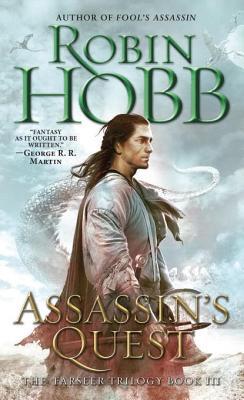 I don’t know what to say. This trilogy was a quite a ride. I enjoyed every moment of it and it was great buddy reading it with Emily at Embuhlee liest because I had someone to talk to about the story but now it’s over and I don’t know what to think. Except, Verity…

From an extraordinary new voice in fantasy comes the stunning conclusion to the Farseer trilogy, as FitzChivalry confronts his destiny as the catalyst who holds the fate of the kingdom of the Six Duchies…and the world itself.

King Shrewd is dead at the hands of his son Regal. As is Fitz — or so his enemies and friends believe. But with the help of his allies and his beast magic, he emerges from the grave, deeply scarred in body and soul. The kingdom also teeters toward ruin: Regal has plundered and abandoned the capital, while the rightful heir, Prince Verity, is lost to his mad quest — perhaps to death. Only Verity’s return — or the heir his princess carries–can save the Six Duchies.

END_OF_DOCUMENT_TOKEN_TO_BE_REPLACED

Mondays aren’t always pleasant if one has to work (I do). To perk up my spirit, I thought it would be fun to kick off the work week with a book tag based on one of my favorite songs — “Bohemian Rhapsody” by Queen.

When I first heard this, I played it over and over and over. I was so obsessed and I damn near blew out my ear drums cause I turned it up so loud. Actually, let’s kick off the tag by watching the music video.

I found this tag on Magic of Books and vowed to do it very, very soon. It was created by the Bookish Underdog.