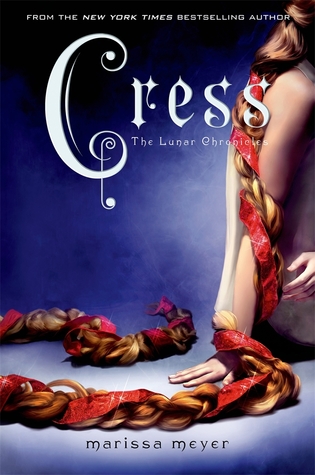 Ahh… Cress. She didn’t stand out to me.

In this third book in Marissa Meyer’s bestselling Lunar Chronicles series, Cinder and Captain Thorne are fugitives on the run, now with Scarlet and Wolf in tow. Together, they’re plotting to overthrow Queen Levana and prevent her army from invading Earth.

Their best hope lies with Cress, a girl trapped on a satellite since childhood who’s only ever had her netscreens as company. All that screen time has made Cress an excellent hacker. Unfortunately, she’s being forced to work for Queen Levana, and she’s just received orders to track down Cinder and her handsome accomplice.

When a daring rescue of Cress goes awry, the group is splintered. Cress finally has her freedom, but it comes at a higher price than she’d ever expected. Meanwhile, Queen Levana will let nothing prevent her marriage to Emperor Kai, especially the cyborg mechanic. Cress, Scarlet, and Cinder may not have signed up to save the world, but they may be the only hope the world has.

I read this a while back and because I was busy prepping for my mini-vacation getaway, I didn’t jot down my thoughts immediately after completing the book. Later, I was either too busy or too tired to do so; therefore, this reflection will be short.

I picked up this installment hoping that it would increase my interest in the series since it took a plunge after Scarlet. Unfortunately, such wasn’t the case. I enjoyed reading about the characters’ adventures and visiting the moon (though I didn’t see much of it), but the strong emphasis on the romance irked me. I didn’t like the obvious pairings and how clean-cut the relationships are. There is no complexity to them. And Scarlet and Wolf’s relationship is the worst because Wolf seems to have an unhealthy attachment to Scarlet, as if he’s obsessed with her. (I read a great post on Mythical Musings Blog a couple days ago on love in YA that hits on all the problems I see with romantic relationships in young-adult books. I highly suggest y’all check it out.)

The same goes for the relationship between Thorne and Cress. Cress has a huge crush on Thorne that’s based on her idealized version of him. Though she begins to change toward the end of the story, she is still very much “in love” with him and doesn’t see him for who he really is. Thorne says as much in the story. I can already tell they will be in a more serious relationship, but I can’t “ship” them because their relationship seem unhealthy to me. I get that Cress is the hopeless romantic, but I can’t support her falling for Thorne because she refuses to accept who he is. Also, it seems that Thorne is trying to change to match that idealized image Cress has of him, which is also unhealthy. 😦 Really hate these relationships.

“The woman’s  voice rose in intensity with the violins and cellos, a climax sung up into the shower’s downpour. Cress held the note as long as she could, enjoying the way the song rolled over her, filling her with its power.

She ran out of breath first, suddenly dizzy. Panting, she fell against the shower wall.

The crescendo died down into a simple, longing finale, just as the water sputtered out.”

I had nothing else to say so I jumped to this section.

Umm… I read about half the book and skimmed the rest when the romance became too cheesy to bear; however, I read all the important parts essential to the plot. Doing that made me realize that I don’t care about any of the characters except Cinder, Thorne, and Iko. I didn’t even care for the new dude or what he did at the end.

I considered giving up on the series but decided to continue with it because I’d like to see how all the political and social issues will work out. Discrimination against cyborgs and hatred of Lunars is ingrained in earthlings. How will those rifts heal? That’s why I’ll continue reading.

8 thoughts on ““Cress” by Marissa Meyer”