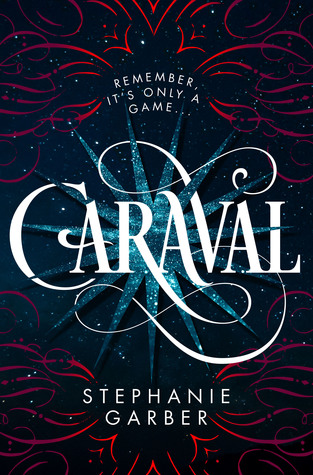 I didn’t like it. I went into this one with HIGH expectations because I was told that it’s like Erin Morgenstern’s The Night Circus, which I read at the beginning of 2016 and loved. With that in mind, I started Caraval expecting an engaging story that would keep me at the edge of my seat, making me fall in love with its characters and prose. Unfortunately, that’s not what I got.

Welcome, welcome to Caraval―Stephanie Garber’s sweeping tale of two sisters who escape their ruthless father when they enter the dangerous intrigue of a legendary game.

Scarlett has never left the tiny island where she and her beloved sister, Tella, live with their powerful, and cruel, father. Now Scarlett’s father has arranged a marriage for her, and Scarlett thinks her dreams of seeing Caraval, the far-away, once-a-year performance where the audience participates in the show, are over.

But this year, Scarlett’s long-dreamt of invitation finally arrives. With the help of a mysterious sailor, Tella whisks Scarlett away to the show. Only, as soon as they arrive, Tella is kidnapped by Caraval’s mastermind organizer, Legend. It turns out that this season’s Caraval revolves around Tella, and whoever finds her first is the winner.

Scarlett has been told that everything that happens during Caraval is only an elaborate performance. But she nevertheless becomes enmeshed in a game of love, heartbreak, and magic with the other players in the game. And whether Caraval is real or not, she must find Tella before the five nights of the game are over, a dangerous domino effect of consequences is set off, and her sister disappears forever. (Goodreads)

I’ll try to keep this section as spoiler free as possible.

I requested and received an advanced copy of Caraval back in August but decided to read it close to its publication date. As I said above, I was drawn to the story because of its comparison to The Night Circus, however, I think its similarity to The Night Circus starts and stops at the circus in the novel. Like the circus in The Night Circus, the caraval in this book is a mystical event where anything is possible, it seems. It’s easy for people to get swept up in the events and believe all they see is true, which is why, upon entering the caraval, spectators and participants are reminded, twice, that what they see isn’t real. Still, the caraval sometimes drives people insane since some can’t separate the imaginary from reality.

Since I began the book expecting it to be like Morgenstern’s, I immediately became disappointed when I realized that it’s nothing like The Night Circus. I so enjoyed Morgenstern’s book that I’ve been on the lookout ever since for a novel exactly like it. Unfortunately, that lead me to judge Caraval harshly when I started it. When I realized what I was doing, I took a step back from the novel and approached it with a more open mind, to accept it as it is. However, even when I did so, it was hard for to be engrossed in the story.

From the beginning the protagonist, Scarlet, annoyed me. And since the story is told from her point of view, I was annoyed the entire time I read. It’s hard to tell whether it’s my dislike of the protagonist or how the story is narrated that turned me off the most. I don’t like very naïve characters who stall the plot with their indecision or ask very dumb questions of themselves and other characters, but that seems to be a staple of how most YA books are narrated.

Characters often wonder if they are doing the right thing, which is expected, it’s natural to doubt yourself, but it annoys me when these questions pop up on every other page. In a way, Scarlet here reminded me of the titular character in Scarlet by Marissa Meyer, except Caraval’s Scarlet isn’t as stubborn. The two are also similar in their mistrust of their love interests before later falling for them, but how the romance develops between Caraval’s Scarlet and her love interest is a bit more believable.

I was skeptical of Scarlet’s close relationship with her sister, Tella, however. Scarlet tells us that they are close, but the story mostly illustrates how much she doesn’t know about her sister because her sister’s actions are always a huge surprise to her. And though the adventures in the novel occurred because Tella was trying to help Scarlet, I find it all very deceptive and devious.

I think the only thing that I liked about Scarlet is her synesthesia. She sees her emotions in colors. That was interesting, but it was inconsistent throughout and often it was pointed out at moments when the author wants you or Scarlet to pay close attention to something. It almost seemed like a magical ability rather than the way her mind/body works.

Another problem I had with the story, and it’s a minor one, was that there is hardly any mention of food. In the entire story, we never see Scarlet and her companion eat anything. I wondered how she has the energy to run around. I also wasn’t aware of the passage of time. I could only tell when night fell because that’s when the caraval starts, but the characters don’t sleep for long and sometimes it was hard to tell whether it was day or night. There were also other minor inconsistencies, but since I was reading an ARC copy, I assumed those would be cleared up by the time the book is published.

It’s a low rating, but that’s how I felt about the story. I didn’t enjoy it. I think the characters were flat, even Scarlet, and could use some more development and I don’t think it was well written either (though I probably think that last bit because I wanted writing similar to what I got in The Night Circus). I do think the caraval is interesting, but that wasn’t enough to carry the book.

However, don’t let my low rating turn you off from trying the book yourself. There are lots of 5-star ratings on Goodreads and from other bloggers here on WordPress and other blogging platforms. Seeing those ratings make me wonder if I missed something while reading because I really didn’t like this one though I hoped it would be one I’d love.

Whether or not you enjoyed Caraval, please share your thoughts on it below. I’m curious to know what you thought.

27 thoughts on ““Caraval” by Stephanie Garber”