This will seem like a large book haul, but a month and few days has passed since I last posted one of these so let’s blame the abundance of books on the passing of time.

However, it’s been such a long time since I’ve bought these books, some of which I’ve read or mentioned in blog posts, that I feel as if I’ve already mentioned them in a haul post. So typing this feels like déjà vu.

Since I feel weird as I write this post (as if I’ve done it before), I think it fitting to first feature Mostly Void, Partially Stars, which is the first volume on the Welcome to Night Vale podcast, a twice-monthly podcast structured like a radio show whose host, Cecil (love him!!), tells us of the goings on in the desert town called Night Vale. Mostly Void, Partially Stars contaiins a transcript of the first season of episodes with some notes from the creators, Joseph Fink and Jeffrey Cranor.

Night Vale is such an odd place and I’m totally hooked on the show. I just learned that the guy who plays Cecil is actually named Cecil, which blew my mind for some reason. I’d like to hear him speak in real life. I love his voice.

Letters to a Young Writer: Some Practical and Philosophical Advice by Colum McCann

I recently reviewed this one, which was a great. I almost didn’t buy it because I’ve banned myself from purchasing books on writing until I put a dent in the ones I already own; but I couldn’t leave this behind. It’s a wonderful book of advice and I’m glad I got it.

I visited Kramerbooks in Dupont Circle on Independent Bookstore Day and picked up these two:

The Throwback Special by Chris Bachelder

As part of their Independent Bookstore Day events, Kramerbooks set a few books aside that they wrapped and wrote descriptions of the story on the package. Customers had to take a chance in their purchases because they’re not aware of what they’re buying. I was so excited for this. I both love and hate surprises and after making my purchase, I asked what the titles of the other books were (I remained unaware of mine until I unwrapped it).

Mine turned out to be Chris Bachelder’s The Throwback Special. I avoid books centered on sports (so I worry that I won’t like this much), but I picked it up because of these buzzwords on the wrapping: ritual, existential anxiety, award-winning comic novel.

How to Read Buildings: A Crash Course in Architectural Styles by Carol Davidson Cragoe

I had to pick this up when I saw it. I am supposed to be instructing myself in art and architecture, but haven’t done so in a while. I plan to walk around the city with this book in the summer and try to spot the styles.

The Barrowfields by Phillip Lewis

I read a review of this on Shelf Awareness and immediately added it to my TBR because the book “captures the idiosyncrasies of small-town mountain life.” I like reading about small towns, which is also why I added Jess Kidd’s Himself (see below) to my TBR as well. However, since I discovered both novels around the same time, I keep confusing them.

I found a brand-new copy of The Barrowfields in Second Story Books and had to get it. I read the first couple paragraphs so I think I’ll like the story.

The Thorn of Dentonhill by Marshall Ryan Maresca

This was one of the books I mentioned in my first Tough Travelling post, which is a monthly meme that recommend books based on fantasy tropes. Since I’m fairly new to fantasy and haven’t read many books in the genre, I do my post at the end of the month so I can read everyone else’s first and get recommendations. This was one of the books I discovered while doing so. I got it because I’d like to read more books with characters studying magic.

The Great Hunt by Robert Jordan

I already own paperback copies of these but since I’m now on Audible, I downloaded audio files of them to reread using that medium. It took a while for me to get used to the narrators’ voices, but once I did, I was engrossed in the story. I gave up on the series about two years ago, but listening by audio has convinced me to continue. I would like to see how things are resolved.

The following were bought on Book Outlet, which now has free shipping on orders over $35 to the U.S. and Canada. They didn’t ask me to advertise for them (in case you’re wondering). I just love the website that much because I bought a bunch of books for the price of one regular-priced hardcover. 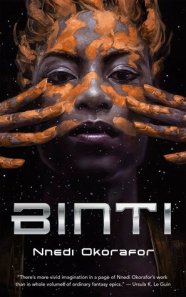 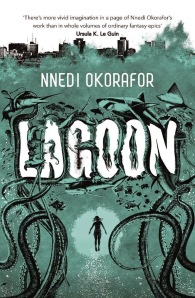 I’ve only read Akata Witch by Okorafor, so I bought these two to try more of her work. Plus the covers are great.

The Twelve Caesars by Suetonius

I’ve always wanted to read this book so I had to get it when I saw it on Book Outlet. The copy I received was a bit damaged though, but it was already so cheap and I didn’t much care for how it looks, so I kept it.

The Fall by Guillermo del Toro and Chuck Hogan

The second in The Strain trilogy, which was adapted for TV on FX. (I love the show!!) I recently read the first book and loved it, so I can’t wait to start on this.

I also featured this in my Tough Travelling post and had to get it because it deals with gods and has beautiful prose.

I also got these comics from Book Outlet but haven’t yet received them ’cause the post office is fucking with my life. 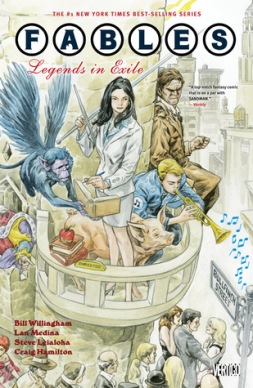 I’ve avoided this comic because I’m not a fan of the art style or paper quality (silly, I know), but I really would like to read the story, so I’ll try it whenever the post office gets around to delivering my shit. (I’m so pissed at them.)

I featured this in a Wishes for My TBR post a while back and have wanted to get it ever since, so I was super excited when I saw it on Book Outlet. (This is the reason why I made the purchase.)

Samurai, Vol. 1-4: The Heart of the Prophet by Jean-François Di Giorgio, illus. by Frédéric Genêt

The cover made me add it to my cart and when I googled the art, I decided to get it. I don’t know much about it other than that the comic was initially published in France. For more details, see this quick review on Starburst Magazine.

Well, I only received one gift and I’m not even sure if it’s a gift or if my brother is just lending it to me, but I like gifts so I’ll think of it as such.

I so need to catch up on this series. 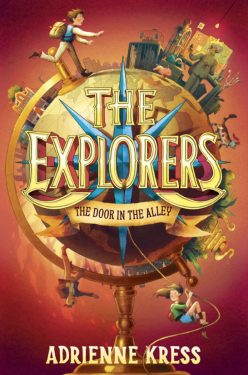 The Whole Thing Together by Ann Brashares

This is Ann Brashares’s new book, recently published on April 25. I wanted to read it before its release, but I got sick and everything is backed up now. It looks like another book about family and friendship. I requested it because I enjoyed her Sisterhood of the Traveling Pants series.

The Door in the Alley by Adrienne Kress

This seems like a middle-grade mystery, adventure story. It’s the first in The Explorers series and it was published on April 25 as well. I started reading it as soon as I got it because I like the cover, but couldn’t get into the story. I kept falling asleep, but that could have been because I was ill at the time. I plan to complete it soon.

The Lost Kingdom of Bamarre by Gail Carson Levine

Published on May 2, this seems to be a prequel to Levine’s Two Princesses of Bamarre series. The first book was published in 2001.

This is a huge book and I enjoyed it as I read but because it’s on such high demand at the library, I had to return it before I could make much progress. I plan to get the paperback (next year, I guess) and complete it.

I’ve seen two reviews of this and I want to keep it at that. Both reviewers say the story was promising at first, but fell flat toward the end, or they DNF’d it. So far, I’m hooked though I don’t like the protagonist.

Who Thought This Was a Good Idea?: And Other Questions You Should Have Answers to When You Work in the White House by Alyssa Mastromonaco and Lauren Oyler

I’m currently reading this and am enjoying it. It’s a memoir about how Alyssa Mastromonaco became deputy chief of staff for operations during President Barack Obama’s administration. She was the youngest woman to hold that position. I didn’t expect this to be as funny as it is.

The Dragon Reborn by Robert Jordan

I downloaded the audio book from the library since I’ve already used the one credit I’m allotted each month on Audible. 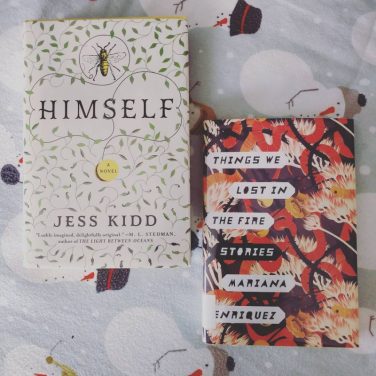 Harry Potter and the Sorcerer’s Stone by J.K. Rowling, illus. by Jim Kay

While convalescing from my illness, I began to long for a Harry Potter story so I picked up the illustrated copy and am reading it aloud to myself, which made me realize that I’m horrible at reading aloud. My eyes move faster than my mouth and I stumble over all the sentences.

The River by Alessandro Sanna (illus.), trans. by Michael Reynolds

I picked this up because the illustrations look beautiful.

Himself by Jess Kidd

I saw a review of this on BookPage and decided to read it. So far, it’s hard to get stuck in the story. I don’t think I like the writing style much, which is unfortunate.

Things We Lost in the Fire by Mariana Enríquez, trans. by Megan McDowell

I picked this up after reading Danielle’s review and am looking forward to it. I’ve since read lots of great reviews of it.

And that’s all the books for now.