Top 5 Wednesday is a weekly meme created by GingerReadsLainey and now managed by Sam from Thoughts on Tomes. For more information on this meme, visit the Goodreads group.

For this, I chose characters who don’t figure prominently in their respective stories. Meaning instead of side characters, such as Hermione and Ron, to use the example Sam listed, I instead focused on characters with minor roles, such as Seamus and Dean. So, speaking of Harry Potter, I’ll start with

I’m not an animal lover, but I think if I was I would love cats best because I like how independent and aloof they are. I like Crookshanks because he’s smart and is a bit like Hermione, willing to do what’s right despite everyone saying he’s wrong or scolding him for his actions. Also, he looks grumpy and is big and cuddly, like a teddy bear… (I know I’m being totally weird now.) 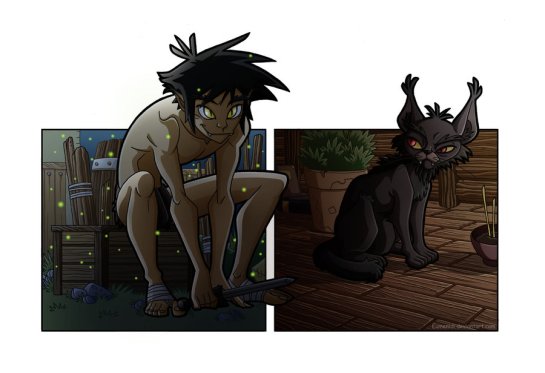 Another cat I like is Solembum, who’s actually a werecat, meaning he can assume a human shape, from the Inheritance Cycle series by Christopher Paolini. While Crookshanks will sometimes snuggle up to characters, Solembum is more often aloof and interacts with humans only when he has something to say.

Another animal I like is Psyduck from Pokemon because he’s clumsy but very powerful and annoys Misty by sometimes randomly popping out of his Pokeball.

the circus in The Night Circus

I see the circus itself as a character that the other characters create and are involved with and I love it for what it is and what it represents. It’s mysterious and is the production of various individuals’ creative input and it seems organic, growing and altering as the magic works on it.