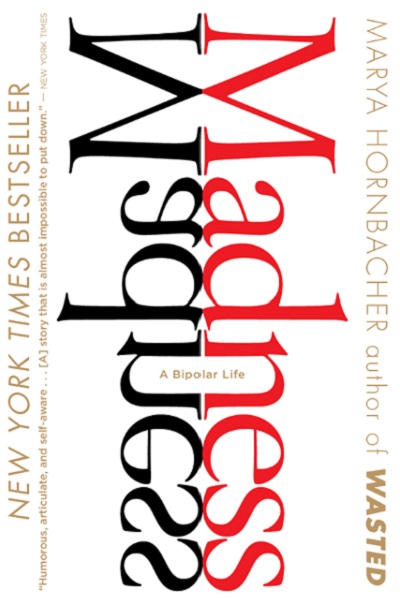 When Marya Hornbacher published her first book, Wasted: A Memoir of Anorexia and Bulimia, she did not yet have the piece of shattering knowledge that would finally make sense of the chaos of her life. At age twenty-four, Hornbacher was diagnosed with Type I rapid-cycle bipolar, the most severe form of bipolar disorder.

In Madness, in her trademark wry and utterly self-revealing voice, Hornbacher tells her new story. Through scenes of astonishing visceral and emotional power, she takes us inside her own desperate attempts to counteract violently careening mood swings by self-starvation, substance abuse, numbing sex, and self-mutilation. How Hornbacher fights her way up from a madness that all but destroys her, and what it is like to live in a difficult and sometimes beautiful life and marriage — where bipolar always beckons — is at the center of this brave and heart-stopping memoir.

Madness delivers the revelation that Hornbacher is not alone: millions of people in America today are struggling with a variety of disorders that may disguise their bipolar disease. And Hornbacher’s fiercely self-aware portrait of her own bipolar as early as age four will powerfully change, too, the current debate on whether bipolar in children actually exists. (Goodreads)

“Madness strips you of memory and leaves you scrabbling around on the floor of your brain for the snatches and snippets of what happened, what was said, and when.”

This was such a visceral read for me. Marya Hornbacher’s Madness: A Bipolar Life is an autobiography about her struggle with bipolar disorder, ultra-rapid-cycle type 1, which is hard to treat.

Hornbacher takes us through her life starting when she was four and unable to sleep for nightmares to her teen years when she turned to alcohol and developed an eating disorder to adulthood when she has overcome many hardships and has acknowledged and accepted that she has bipolar disorder.

It was a hard read for me because of how descriptive the book is. As interested as I was in learning more about her, I often had to take breaks or force myself to take a break from reading. Because of this, I think the book can be triggering for some folks, which is the same that was said in the video where I first learned of Hornbacher’s book. (The video is by author and booktuber Jen Campbell and is about Mental Awareness Week.) Others might feel uncomfortable as they read, as I was, but I this book is an important read because it shows how it is for Hornbacher to live with bipolar disorder.

It was an illuminating read for me. Though I am curious about mental illness and will sometimes try to learn more, there is much I do not know especially since mental illness isn’t a topic often discussed in my family and isn’t regarded with much sensitivity (though this is changing).

There isn’t much else I have to say on this book. This was one of those reads that was mostly about experience for me. It showed me something new and introduced me to a life, an experience, an illness that I was ignorant of. It was a book I needed to read.

I’ve seen many people who manage book blogs or YouTube channels refrain from rating autobiographies and such because it’s as if you’re rating the person’s life. This is the first time I’ve thought the same.

However, these 5 stars isn’t a rating of Hornbacher’s life, but instead the writing itself. I believe the book is well written and I like how it is written because it seems that Hornbacher wrote certain passages to mirror how she felt at that time.

I highly recommend the book, but I do warn that it can be triggering and might not be for everyone.

9 thoughts on ““Madness: A Bipolar Life” by Marya Hornbacher”