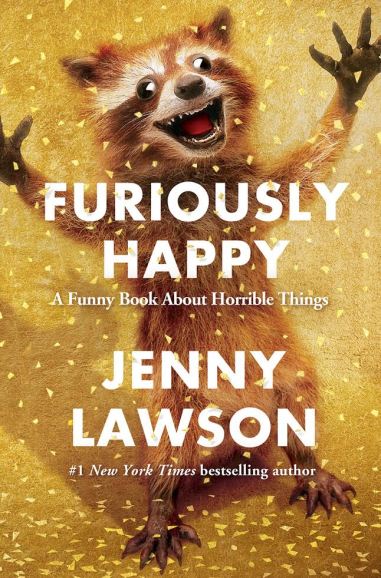 A couple weeks ago, I was on a roll reading memoirs about mental health. I started with Susan Cahalan’s Brain on Fire, which pricked my interested, then picked up Madness by Marya Hornbacher, which was absorbing though sometimes unsettling, and moved on to Furiously Happy by Jenny Lawson, which was totally hilarious.

“In Furiously Happy, a humor memoir tinged with just enough tragedy and pathos to make it worthwhile, Jenny Lawson examines her own experience with severe depression and a host of other conditions, and explains how it has led her to live life to the fullest.” (Goodreads)

I cut that Goodreads summary short because that’s what the book’s about and all you need to know going in. You don’t even need to read the rest of my review, unless you’re really interested in knowing what I thought of the book, because it’s best to just hop right in. Trust me, you’ll enjoy it.

I’ve read and listened to several reviews of Furiously Happy, but by the time I checked it out from the library, I’d forgotten them all. I only recalled that everyone who read it enjoyed it and recommended it to others. And now I’m part of that everyone because I too enjoyed reading this and would recommend it also.

Lawson had me laughing before the book began and after the book was done because I’d reflect on some of things I read and start chuckling to myself. Though this is a memoir and is all true, I sometimes found it hard to believe it all. I kept wondering “Did she really do that?” Like when she dressed up as a koala to take a picture with the koala bears. Lawson included a photo of her doing that and still I wondered if she did. Either way, I admire her fearlessness in not shying away from being who she is.

I liked everything about this book and especially the cover, which made sense while I read. However, about halfway through, the humor started to wear on me and I became impatient with the book. I don’t blame this on the book, though, because by then my mood had changed and I became interested in American history and vampires so reading humor would obviously annoy me as much as it entertained.

It’s a humorous, entertaining read with a wonderful message to remain true to who you are and cherish the wonderful moments in life. I’d like to reread this by audiobook, especially if Lawson narrates it.

19 thoughts on ““Furiously Happy: A Funny Book About Horrible Things” by Jenny Lawson”