A fairly recent visit to the library led me to pick up two illustrated children’s books, one that focuses on the refugee crisis and another that shows us the geography of the Limpopo River Valley in Zimbabwe.

The Journey by Francesca Sanna

Quick summary and My thoughts:

I’ve wanted to read this book since I first heard of it. Sanna’s The Journey was published last year and is about a family seeking refuge in a new land because their country is ravaged by war, which has taken the father, leaving the mother to care for the two children and seek safety for them.

When I first heard of this book, I was reminded of The Arrival, a silent graphic novel by Shaun Tan about a man seeking a safe place for his family to live. Both The Journey and The Arrival are powerful, timely books that relay their stories in little or no words.

The Journey has at most three or so sentences per page. However, the illustrations that accompany the story both emphasize what is said and help to advance the plot, which focuses on a sad and stressful time for the protagonist’s family but ends on an optimistic note.

The ending is quite open-ended, which I like because it shows that the family’s journey and experiences isn’t limited to only what we see. Just because they found a place of refuge doesn’t mean that they will live happily ever after, as seen in how refugees are sometimes treated by others when they emigrate from their land.

I also like that the characters lack defining characteristics. We aren’t told the names of any of the characters and can’t even tell which of the children narrates the story. This gives the story a sense of universality. It becomes a story that all people have either heard or experienced.

“This book is a collage of all those personal stories and the incredible strength of the people within them.”

According to Sanna, who is an Italian illustrator and graphic designer, The Journey is “a collage” of the stories of migration she has collected over the years. She said, “It began with the story of two girls I met in a refugee center in Italy. After meeting them I realized that behind their journey lay something very powerful. So I began collecting more stories of migration and interviewing many people from many different countries.” With The Journey, Sanna has shared a story that many will be able to relate to.

It’s a simply yet powerful story that many have heard or can relate to, and the artwork is colorful and very appealing. I highly recommend the book to both kids and adults.

A definite buy. I want to get myself a copy.

Where Are You Going, Manyoni by Catherine Stock

Quick summary and My thoughts:

Where Are You Going, Manyoni was illustrated by Swedish illustrator Catherine Stock. The story follows a little girl named Manyoni as she prepares for and walks to school. Set on the Limpopo River in Zimbabwe, Manyoni travels a long distance to school and passes many wild animals on her way.

Stock does a great job of emphasizing how far Manyoni must travel — walking — alone to school. Of the book’s 48 pages (according to Goodreads), four at the beginning show Manyoni at home preparing for the day and six at the end show Manyoni arriving at the village, interacting with her teacher, and playing at school. The rest of the pages  are all of Manyoni walking to school.

Since illustrated children’s books are short, I tend to reread them before jotting down my thoughts. The first time I read this book, I didn’t see the point of the story. To me then, the character wakes up, walks to school, and plays when she gets there. Not much to that plot; she doesn’t even interact much with anything on her walk, except when she meets a friend toward the end.

However, on my reread I realized that the plot’s emphasis is on Manyoni’s surroundings: The emphasis is on the art, which I missed on my first read because I didn’t pay much attention to the art. I didn’t like it. If I had paid attention, I’d have noticed that Stock tries to capture the look and feel of the land around the Limpopo River in her watercolor paintings. Also, she has craftily included many animals along Manyoni’s walk that are only noticeable if one pays attention to the art. Because of this, I think kids will enjoy reading this book and pointing out the animals they notice. There is a glossary in the back that includes illustrations of the animals and their names to help identify them.

I didn’t like it, unfortunately. I usually like how watercolor paint makes colors bleed into each other, but for some reason, that style didn’t appeal to me here. I guess it’s because of the colors used — a myriad of pale greens and browns to capture the look of the land. I think I prefer watercolor for more vibrant colors so even if the color is toned down, its vibrancy is still apparent.

Despite my dislike though, Stock did a great job of portraying the landscape of the Limpopo River and using her illustrations to emphasize and communicate an element of the story that is unstated: the long distance Manyoni must travel alone.

The story is fine and I recommend it to parents because I think kids will enjoy reading it and identifying the animals, but I really don’t like the art. 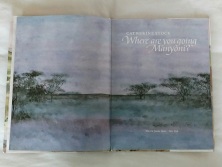 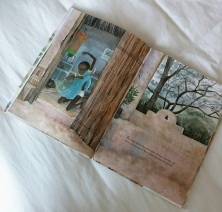 14 thoughts on “Two Illustrated Books: “The Journey” and “Where Are You Going, Manyoni””