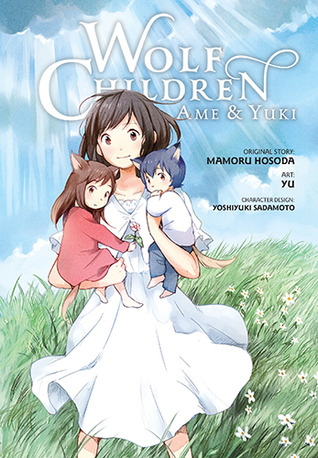 A while back, I read a review of Wolf Children that made me seek to experience the story myself. Since I couldn’t find a place online to watch it, I decided to get the manga and read it. I was drawn to the beautiful illustrations but, as with all my book purchases, I immediately forgot about it once I shelved it in my bookcase.

It wasn’t until the Tome Topple Readathon rolled around that I sought it out to read for a challenge — Read a graphic novel (over 500 pages). I was glad to finally read the book after being curious about it for so long and sample its beautiful art.

Wolf Children is about a woman who falls in love with a man who is half wolf, the last of his kind. Circumstances lead her to raise their two children on her own, which she does with great patience and care. She never complains despite the difficulties she encounters in raising half-wolf children, but instead faces her challenges with optimism and a smile.

The children are complete opposites of each other. As a child, the older sibling, Yuki, is a spirited girl who loves to explore and experience new things and is driven by her curiosity about the world. In contrast, her young brother, Ame, is introspective, quiet, observant, and most of all, cautious. However as the two mature, their experiences lead them to choose unexpected paths.

I enjoyed the story and breezed through it in a night. At first, I thought I would give up on it because I didn’t much like the beginning, which focuses on the mother falling in love with the father. Some of her thoughts there seemed silly to me, though they make sense since we all obsess a bit at love’s first bite. The plot was slow there and it took a while to stir my interest.

To me, the story takes off when the children enter it and the focus switches to them. I was immediately drawn in by them both: tickled by Yuki’s antics, which I thought were cute but often made me pity her mother, and empathizing with Ame and silently urging him to be more daring and curious and explore his surroundings. The children are sweet and their young, innocent days made me think of the Miyazaki film Spirited Away. Those are my favorite parts of story, when they’d just moved out to the country.

It was interesting to see how their individual experiences affect their choice on how to live with the wolf part of their identity. However, of the two, I was more intrigued by Ame’s story than Yuki’s because it seemed more spiritual and a touch philosophical as well. He’s driven by his increasing curiosity about his identity and where he belongs. And it was interesting to see his mother struggle to accept his decision at the end.

With Yuki’s story, I guess I was turned off by her declaration to be a girly-girl and deny her wolf identity. I understand that she was driven to that decision by shame and, later, guilt, but I didn’t like that circumstances led her to choose to conform to society’s controlling expectations of her. Not that anyone forced her to change, but feeling like an outsider for simply being yourself is hard for anyone to deal with especially a kid.

I admire their mother. She is demure and introverted, but she has a quiet strength that’s seen in how she provides for and raises her children without complaint. However, sometimes I wished she would get angry or annoyed because her constant smiling and optimism gave me the impression that she doesn’t always express her true feelings. We don’t really get to see things from her perspective or hear her voice because the story is narrated by Yuki, so it’s possible that Yuki is used to her mother always smiling and optimistic and isn’t privy to,, or doesn’t remember, her mother’s negative moods.

Because of all the mother has to grapple with to raise the children and because I liked scenes when she and the wolf man are together (like when she was pregnant), I kept wishing that the wolf man would reenter their lives. I kept hoping for it, especially when Ame began to struggle with his identity (he seemed so much like his dad then). So right up to the end, I kept hoping the family would be united and remain so. Even now, despite the ending, I keep hoping for it.

My favorite panels are of Ame and Yuki playing in the snow. Those are so beautiful! I love how they’re drawn as toddlers and love the sound effects given when their wolf ears pop up, lol. It’s cute.

I enjoyed the story and loved the art, and I think it’s a good one for both adults and kids, like middle-grade kids, I think. I like that the story seems to be telling us that there’s no telling who children will later become. It’s best to let them be who they want to be and not force them to fit a mold.

The mother in the story did not force her children to be wolf or human, she instead let them be who they are and even more, found a place where they would be free to be who they are (relatively); and she allowed them to choose their own paths, which was hard, but she realized is necessary.

It’s good, it’s beautiful, and it’s a story I could see peeps returning to reread. 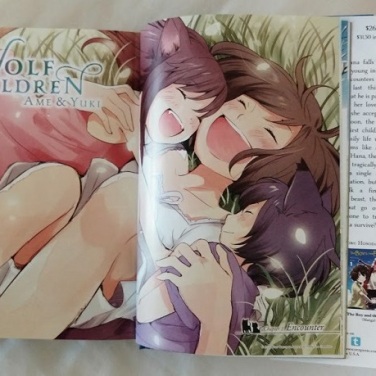 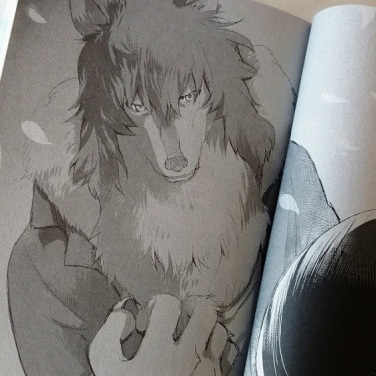 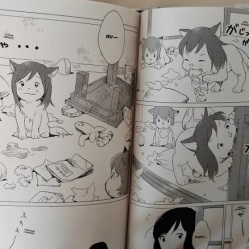 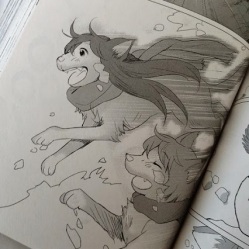 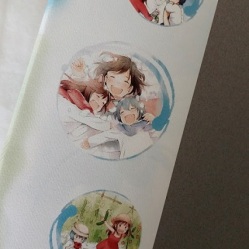