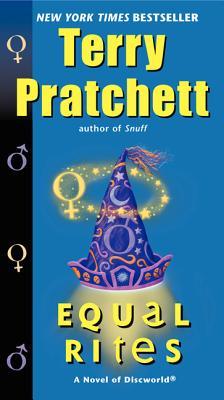 I finally learn why one of my favorite bloggers is an Orangutan Librarian.

“Now you listen to me, Gordo Smith,” she said. “Female wizards aren’t right either! It’s the wrong kind of magic for women, is wizard magic, it’s all books and stars and jommetry. She’d never grasp it. Whoever heard of a female wizard?”

A wizard who knows his death is imminent visits a village called Bad Ass (lol!) to pass on his powers and wizard’s staff to the seventh son of a seventh son, who is about to be born. The wizard does so soon after the baby’s birth and, soon after doing so, learns that the baby is not a boy, but a girl, thus making her Discworld’s first female wizard.

Granney Weatherwax, the witch who helped to deliver the baby, believes it’s wrong to have a female wizard. Women should be witches and men wizards. She keeps a close eye on the baby’s development and when the girl, named Esk, starts to show an aptitude for magic, Granny Weatherwax takes her on as an apprentice witch. But before long, Granny Weatherwax realizes that Esk belongs at the Unseen University, a wizard institution, where she can learn more about her growing powers.

Granny takes Esk to the University but both have various adventures along the way that so affect them that by the time the arrive, both aren’t exactly as they were at the beginning of the journey. Joining the Unseen University is a challenge for Esk since girls aren’t accepted, but with Granny Weatherwax’s help, she’s able to attend…sort of…and help defeat a powerful force that threatens it. (Goodreads)

This was a long time coming. I knew nothing of Pratchett or Discworld prior to joining the online book community. When people mentioned a flat world held up by four elephants standing on the back of a giant turtle floating through space, I had no idea what they were talking about and assumed that I’d missed out on an historical event (like how I missed the total eclipse cause I working). But over time, I sorted it all out and slowly became curious about Pratchett and his books. Really, I just wanted to know what all the hype was about. Why is he so awesome?

The hardest thing was figuring out where to start since the Discworld series is comprised of several others. There are many infographs meant to be help people with this decision, but they were all overwhelming. Apparently one can start anywhere, but as someone who feels weird about jumping in the middle of things, selecting a random book didn’t appeal to me. The best advice I received was to just start with the series that most appeals to me, so I chose the Witches series though I’m super curious about Mort (leaving that for later like a tasty dessert).

Equal Rites was great and a lot of fun to read, though at first I thought I’d give up on it. The beginning was interesting, especially when Death came for the wizard, but the plot slowed some after that as Esk grew up and apprenticed with Granny Weatherwax. For me, the plot picks up when the characters leave Bad Ass, that’s when things start to get interesting and the characters themselves become more appealing.

I enjoyed watching them interact with others outside of Bad Ass and the adventures on the way to the Unseen University were fun to read about. It seemed that Pratchett had fun writing this book and calling out fantasy tropes. According to this book’s narrator, the only reason way dwarf halls ring with the sound of hammers is simply because dwarves like the sound, not because they’re always working, and some dwarves pay goblins to hit ceremonial anvils “just to maintain the correct dwarvish image. (Hahaha!)

Really, once the plot picked up, I began enjoying the story and the narrator became one of my favorite characters because it kept cracking me up. Though my reading experience was immersive and I’d get sucked into the story, the feeling doesn’t last long because the narrator would say something like —

“Their wills clanged like cymbals and the air between them thickened. But Granny had spent a lifetime bending recalcitrant creatures to her bidding and, while Esk was a surprisingly strong opponent, it was obvious that she would give in before the end of the paragraph.”

“The light was misty and actinic, the sort of light to make Steven Spielberg reach for his copyright lawyer.”

— (lol!) which would crack me up and remind me that I’m reading a book. It kicks me out the story yet still holds tight to my attention so that I immediately plunge back in.

Granny Weatherwax is, of course, a favorite too. Although at first I wasn’t sure if I’d warm to her since she was so adamant that women could not be wizards. However the more I learned about her, the more fond of her I grew and I just loved her aphorisms and the lessons she teaches Esk, which are mostly true but also very funny, some of them. Through Granny Weatherwax, I became curious about the Unseen University itself, since it seems to have a consciousness (which made me wonder at Hogwarts’ consciousness and if it’s manifested as Peeves), and I hope more is told about that in other books.

Esk’s adventures were fun and of them all, my favorite was her time spent with Amschat B’hal Zoon, who is a Liar and very proud to be one (lol!). Her time with him reminds me of comedies where there’s a kid in a gang of thugs and the kid is the baddest of them all and the most feared.

It starts out slow, but it’s great once the pace picks up. I’m glad to have finally tried a Pratchett novel and now I must GET and READ them ALL!!! 😀

I plan on owning all the Discworld books (in the original covers because I prefer those), but that’s not necessary. They are quick, entertaining reads and the covers aren’t awesome, so I recommend borrowing them.

“The storm walked around hills on legs of lightning, shouting and grumbling.”

“A vital ingredient of success is not knowing that what you’re attempting can’t be done. A person ignorant of the possibility of failure can be a halfbrick in the path of the bicycle of history.”

“Camels kicked mules, mules kicked horses, horses kicked camels and they all kicked humans; there was a riot of colors, a din of noise, a nasal orchestration of smells and the steady, heady sound of hundreds of people working hard making money.”

“Some things were too big to be really trapped in words, and even the words were too powerful to be completely tamed by writing.”