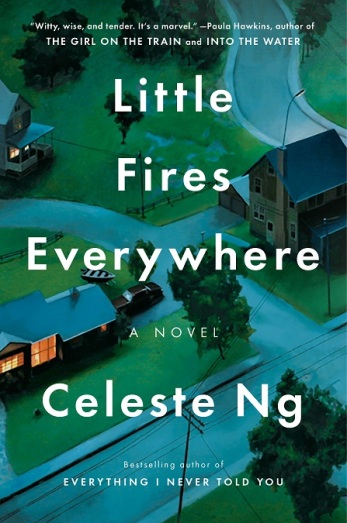 This is one of the many books that surprised me this year. I didn’t expect to like it as much as I did. I received an ARC copy, most likely through a contest, which I requested because the blurb says it’s about “an enigmatic artist” who’s a single mom who has a “mysterious past” and whose “disregard for the status quo” upsets the “carefully ordered community” she moves into with her daughter. All that made me want to find out what exactly happens in the story and now I’m glad I read it because Little Fires Everywhere is one of my favorite books of 2017.

In Shaker Heights, a placid, progressive suburb of Cleveland, everything is planned — from the layout of the winding roads, to the colors of the houses, to the successful lives its residents will go on to lead. And no one embodies this spirit more than Elena Richardson, whose guiding principle is playing by the rules.

Enter Mia Warren — an enigmatic artist and single mother — who arrives in this idyllic bubble with her teenaged daughter Pearl, and rents a house from the Richardsons. Soon Mia and Pearl become more than tenants: all four Richardson children are drawn to the mother-daughter pair. But Mia carries with her a mysterious past and a disregard for the status quo that threatens to upend this carefully ordered community.

When old family friends of the Richardsons attempt to adopt a Chinese-American baby, a custody battle erupts that dramatically divides the town–and puts Mia and Elena on opposing sides. Suspicious of Mia and her motives, Elena is determined to uncover the secrets in Mia’s past. But her obsession will come at unexpected and devastating costs. (Goodreads)

Of the reasons why I love this novel, the foremost is the writing. Ng is a great writer and her talent for storytelling shines through it. I was hooked as soon as I started. Actually, from the first sentence I knew this would be a story I’d like, one I’d be hooked on until it’s end and even thereafter.

“Everyone in Shaker Heights was talking about it that summer: how Isabelle, the last of the Richardson children, had finally gone around the bend and burned the house down.”

This immediate attraction to a story from its first sentence has happened with only a few books. I don’t know what it is about such first sentences, but there is a vibe in them that strongly connects with me and holds me tight throughout the story’s telling. It happened with Khaled Hosseini’s The Kite Runner and most recently with Yaa Gyasi’s Homegoing. In these novels, to me, there’s an essence of the traditional fireside storytelling in how their stories are told. It’s hard to explain why I connect with them, so that’s the excuse explanation I give myself.

With Little Fires Everywhere, I wrongly assumed I would be bored soon after starting because of its setting in a rigid suburb and because the first character we meet, Mrs. Richardson, didn’t seem interesting at first. I also was a bit confused by the beginning because the story starts at the end and jumps to the beginning to tell what led to the explosive event of the Richardson house on fire. But I shouldn’t have worried. The writing and storytelling kept me reading and, pretty soon, the characters held my interest.

And that’s another quality I like about Ng’s story — all her characters are morally gray. They are all flawed in some way. I didn’t like any of them; though because the story mostly focuses on Mia, the single mom who’s an artist, I was inclined to often sympathize with her. I admire Mia for her steadfastness in her goals despite the hardships she has faced, how committed she is to her art, and how hardworking and resourceful she is. She is quite a role model for her daughter, Pearl, and Mrs. Richardson’s youngest daughter, Izzy.

She isn’t a perfect character. There are aspects of her personality that are questionable and can be debated, which is probably why many readers and book clubs like this book. It’s fodder for conversation and debates because the story explores a variety of topics and issues without providing a clear answer or forcing the reader to take a side. A major topic it debates concerns adoption: whether or not a mother should be allowed a second chance with her child once she has gained a stable financial footing to care for the child, and whether or not race should be a major factor when a child is being considered for adoption and how should the family adopting the child ensure the child knows of its racial heritage if the adopting family is not of the same race.

All of this stems from one of the major plot points, which concerns the fight over a Chinese baby whose mother abandoned her at a fire station on a very cold night. The baby was placed in the care of a White couple, who are unable conceive children of their own and who were considering to adopt the infant before the infant’s mother was informed of her whereabouts (by Mia) and decided to fight to get her baby back. This sparks some interesting debates in the book and, I’m sure, in book clubs that have read the novel. I think that aspect of it alone probably made the book a favorite for many readers.

Personally, I lean toward the baby retaining the name her mother gave her – May Ling Chow – and being returned to her mother since the mother is now able to care for her child. The White couple who wanted to adopt May Ling meant well, but it didn’t sit well with me that they changed her name to one more suitable for them – Mirabelle McCullough – and do not consider her Chinese heritage a major and important aspect of her identity. I’m sure they would have been great parents, but May Ling would have a more well-rounded upbringing with her mom, who deserves a second chance.

“Order — and regulation, the father of order — had been the Shakers’ key to harmony.”

Another character who interested me was Mia’s foil, Mrs. Richardson. Unlike Mia who is unpredictable and unconventional, Mrs. Richardson is a proponent of Shaker Heights’s belief in rigid community and stability. Of all the characters, I liked her the least, partly because she’s casted as an antagonist, but mostly because of the lengths she is willing to go to uncover the mysteries in Mia’s past and prove Mia is an unworthy human being. It was distasteful; but I was so curious about Mia’s past that I kind of cheered on Mrs. Richardson as she found out more. I disliked how she used that information and that she’s so blinded by her pride and false sense of self and duty that she doesn’t realize, or refuses to acknowledge, how wrong and unethical her actions are.

However, my major gripe with Mrs. Richardson is that she helps others for selfish reasons. It’s a major pet peeve of mine and it annoys me when I too succumb to it. I hate it when people only offer help because they expect to be repaid for it later, whether by being praised for it or by having the person helped worship them for helping or by having the person helped willing to do favors for them. It’s all selfish and Mrs. Richardson doesn’t even realize it. Instead, she believes she’s being humble, and there are many people who do the same: help out of selfishness and believe they are being humble. It happens every Thanksgiving and Christmas holiday, which have become so commercialized that giving to others and aiding the community is overshadowed by exchanging gifts, and when people actually do community work, they expect a pat on the back. (At the paper I worked at, we heard of nonprofits where donors threatened to take back their donation because a building or something wasn’t named after them or because they weren’t publicly praised for their donation in some way.) I think it’s this aspect of her personality that drives Mrs. Richardson to such dishonest and unethical behavior to uncover Mia’s past because Mia refuses to praise her for her help.

There’s much more discussed in the story that I find interesting, such as characters being so insolated in their sense of privilege that they don’t notice or acknowledge the suffering of others or believe racism doesn’t exist in their rigid community or that “skin color doesn’t say anything about who you are” despite living in a country where one is immediately judged by one’s skin color, but I’ll stop here. My only critique of the story is that some parts were too easy, too simple, and thus seemed a bit predictable. Such parts didn’t offer much of a challenge to the reader or the characters, such as the scene where Mrs. Richardson visits an abortion clinic and quite easily, after a little snag, access the list of patients who recently visited it. I stopped reading for a bit at that part because it was frustrating that it was so easily done and stupid of the character who left that information to be accessed by Mrs. Richardson. But other than that, I quite liked the story.

Well written, easy to read, and lots of fodder for conversation and debates made this a great read. It was a pretty quick one as well because of how engrossed I was in the story.

I’ve decided to be a bit more critical in this section because heading into the new year, my plan is to budget wisely and be more frugal, so I’ll extend that to my blog and my reviews.

So, do you need to Buy this book, no, but I highly recommend that you read it for its writing and the issues explored, so I urge you to Borrow a copy and get at it.

Celeste Ng is now a favorite writer of mine, so I bought her Everything I Never Told You shortly after completing this book (that’s before I made plans to buy less books so hush, if you’re judging).

If you’d like to hear Ng discuss this novel and the topics in it, such as the setting, which is a real place in the U.S., check out this podcast – Between the Covers.