OMG! A month has already gone. My year got off at a run. I was so busy in January that it’s been a while since I’ve had a full weekend at home. But it’s all good. I’m enjoying the year so far despite one drawback in my personal life and am hoping my major goal for the year will be fulfilled. I’d be so happy with myself if I meet that goal.

Reading-wise, January was a great month. I read 4 books, 1 of which was a reread by audio book but for the most part, I enjoyed them all. Blogging was also good. I started scheduling my posts last year and I think I’ll continue to do so this year. It makes my life easier. I also drummed up the courage to finally be able to host my first GIVEAWAY!!

Delicious! by Ruth Reichl was the first book I completed in 2018. It’s a contemporary novel about a young woman who moves to New York City to overcome her grief and gets a job at a food magazine where she meets interesting people and happens upon some mysterious letters. I enjoyed the first half of the novel but after a while, I began to lose interest and the story felt a bit rushed toward the end.

Angels & Demons was a surprisingly good read. It’s a thriller/mystery novel about a bomb threat at Vatican City on the eve of holy conclave for which a Harvard symbologist named Robert Langdon is called in to help. I was so hooked on this story. I borrowed it from the library but ended up ordering an e-copy on Amazon. It was so gripping. There were some parts I doubted and others that made me roll my eyes, but overall, I really liked it.

On another trip to the library, I picked up The Black Tides of Heaven by J.Y. Yang, which is the first novella in the Tensorate series — a fantasy series about a set of twins who were given away by their mother, the country’s Protector, to the Grand Monastery, but were taken back because it was discovered that one twin has prophetic powers. However, this novella focuses on Akeha, who is often disregarded as everyone focuses on Mokoya’s powers. I liked the story. It was an interesting reading experience because people in this world are gender neutral until they choose a gender and the writing reflects that.

I also borrowed from the library the audio book of A Game of Thrones by George R.R. Martin, narr. by Roy Dotrice, because I’m in the mood for those books again. Once again I was hooked on the story but I spent the entire time berating Catelyn Stark for seizing Tyrion, which sets all the craziness in motion. But I guess that was unavoidable since she did believe he had attempted to kill her son.

Other things consumed in January:

Spending New Year’s Eve on a Train With No Midnight (lithub.com)

— I really love this article, probably because I read it after a bus ride from NYC on New Year’s Eve.

The Half-Wild Muse: On Writers and Their Cats (lithub.com)

— A good read for cat lovers, though it’s a touch sad

The Author Writing Fairy Tales About the Horrors of Womanhood (broadly.vice.com)

— A profile of Carmen Maria Machado whose book of short stories, Her Body & Other Parties, was published last year

“With lyricism as its driving force, enchanted prose can create anew any sentence, pull wonder and possibility from the tired or traumatic. It elevates, inspires, reconceives.”

— A good discussion though it pokes at my favorite trope. But I agree with Nicola that we need more variety and I wouldn’t mind reading about a protagonist from humble origins who does great things. 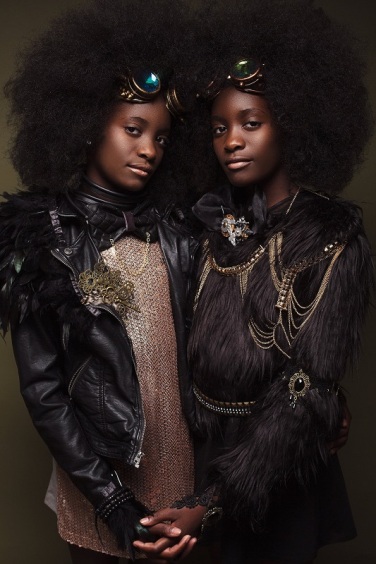 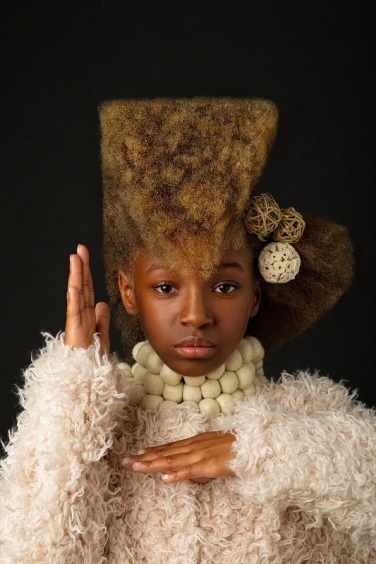 Photographs are by Regis and Kahran of CreativeSoul Photo

I found these beautiful photos in an article, “Baroque-Inspired Portraits Celebrate the Beauty of Black Girls’ Natural Hair,” on My Modern Met that features the work of Regis and Kahran, a husband and wife team that runs CreativeSoul Photo, an Atlanta-based photo studio.

From the article: “The striking images feature young girls in elaborate costuming and hairstyles, from a Baroque-era aesthetic to steampunk clothing to fierce high-fashion ensembles.” Click the link to the article above for more photos.

(This makes me want my hair to be natural already. Love the styles featured in the photos.)

Timely pieces on issues of today

Babe, What Are You Doing? (jezebel.com)

— On the article that appeared on Babe.net in which a young woman recounts her encounter with comedian Aziz Ansari and the responses to it, including the NYT opinion piece by Bari Weiss (which, I admit, I sorta agree with).

What Happens When There’s a Madman in the White House? (lithub.com)

— An excerpt from The Most Dangerous Man in America: Timothy Leary, Richard Nixon and the Hunt for the Fugitive King of LSD, by Bill Minutaglio and Steven L. Davis, which will be published on January 9.

— Frankly, I’m not a fan of the “call-out culture.” I think it’s good to discuss problematic things, not shame people for thinking/believing differently.

— On how Trump leads, but also an exploration of what makes a tyrant. Really great read and so well written.

Can Twitter Make Trauma Generic? And If So, What Should We Do About It? (blog.pshares.org)

— The writer asks some important questions about trauma and our exposure to it through social media such as Twitter.

I Belong Where the People Are: Disability and The Shape of Water (tor.com)

Why I Can’t Quit You, Hoops (nytimes.com)

— Which is a real thing. I experience it sometimes as I spend more time living in the U.S. than in the country of my birth.

When Toni Morrison Smacked Down a Racist Biography of Angela Davis (lithub.com)

— Author Toni Morrison’s review of of the 1972 book Who is Angela Davis?: The Biography of a Revolutionary by Regina Nadelson

Two Classic American Novels About the Madness and Beauty of Race (nytimes.com)

The Monster LGBTQ Readers See in Stephen King’s ‘It’ (signature-reads.com)

Ursula K. Le Guin, Acclaimed for Her Fantasy Fiction, Is Dead at 88 (nytimes.com)

— The New-York Historical Society will host the exhibit in October. (Guess who’s going??) Tickets go on sale in April.

Black, Bookish and Beautiful: This All-Black, All-Female Publishing Team Is Ensuring That Authors of Color Get Their Shine (theglowup.theroot.com)

Animaniacs to get brand-new series on Hulu (ew.com)

What You Need to Know About the Supernatural Spin-Off Wayward Sisters (nerdist.com)

— Smh! I can’t believe I’m just finding out about this show.

Get Your First Look at the Harry Potter: Hogwarts Mystery Mobile Game (nerdist.com)

— Has anyone tried it? Is it good?

— On why technology won’t change books

Because BuzzFeed is awesome

18 Jokes You’ll Only Get If You’re A Big Ol’ Loner (buzzfeed.com)

Interview with Tomi Adeyemi on her book Children of Blood and Bone (shelf-awareness.com)

— It’s a YA fantasy novel that draws on Yoruba language and folklore.

The Spreadsheet of Doom 2018 Liveshow (youtube.com)

— A crazy detailed reading spreadsheet for those of us who like to keep track of our reading stats.

— This cracked me the fuck up! Fred and George Weasley are Marlon and Shawn Wayans; Professor Trelawney is Erykah Badu (LMAO); Umbridge is friggin Omarosa (HAWHAWHAW!!!); and the Sorting Hat is a durag (smh, lol!). Also:

I enjoy listening to podcasts while I work and in January, I discovered some great new-to-me ones that I’m totally hooked on. You all should give them a try.

— Everyone knows about Serial, which seems like a narrative nonfiction/longform journalism podcast or something. I just started listening to it and I’m hooked. Season 1 focuses on Adnan Syed, who was accused and imprisoned for killing his high-school ex-girlfriend, Hae Min Lee, in Baltimore back in 1999. I’m hooked and don’t know what to believe.

— I highly recommend this to those of you who love Disney and/or history, mythology, and folklore. The host breaks down the Disney story and gives us the historical facts they’re based on and discusses why/how Disney made changes to the original or the truth. Here are some episodes I listened to and really liked:

— OMG! This one is so cool and is right up my alley because I love learning about myths and such! And the format makes it seem as if you’re listening to a story even as the host gives us historical facts on things. Those who love fantasy and horror and maybe even history lovers will get a kick out of this one. Here are two episodes I enjoyed:

— I’m super late to this one. I think everyone has already listened to it and liked it. If you’re into history, fantasy, thrillers, or horror, you might like this too. I’ve only listened to one episode so far:

— which is about wizards in history and made me want to read up about John Dee.

— I was craving some Avatar: the Last Airbender and was curious about how the creators came up with the idea for it, so I listened to the first episode of this podcast, which I highly recommend if you’re also curious about Avatar.

This is where I want to live…

I love this small house! It has become my dream home. It’s so cute and quaint. It was featured on the Small House Bliss website, which features small house designs. Visit it to see more small houses.

😀 I highly recommend it. It was soooo funny!! Lol!

Yea, that 1996 flick starring Bill Paxter and Helen Hunt. It was on SyFy one day and I watched it. I forgot how much I liked that movie.

What I’m looking forward to

Yea, I’mma see it when it drops! Can’t wait! I’m trying to decide whether to go with a group or go by myself. I really like seeing movies by myself in the day when not many people are at the theater because you get less interference that way. Still deciding…

I’ve seen just one preview and the acting looks like it’s great.

I saw a preview of it when I saw Shape of Water last month and it made me so curious. I gotta see it.

Lol, yea. Kinda random including this one after all those new, noteworthy releases but I was talking about alligators at an event couple days ago and it made me wistful for this movie. I miss it. It’s been so long since I’ve binged on SyFy. I miss TV.

Whew! That was long. I didn’t realize I’d read so many articles this month. Can someone tell me where I found the time to read them?

I hope y’all found something interesting here, and if you’ve seen any of the movies I mentioned above, let me know what you thought of them.