I’ve had this book on my Goodreads TBR since last year November when I saw it advertised in one of the many bookish newsletters I’m subscribed to. The title caught my attention because I love pashminas and own several. It made me wonder what the story would say about the scarves.

Priyanka Das has so many unanswered questions: Why did her mother abandon her home in India years ago? What was it like there? And most importantly, who is her father, and why did her mom leave him behind? But Pri’s mom avoids these questions–the topic of India is permanently closed.

For Pri, her mother’s homeland can only exist in her imagination. That is, until she finds a mysterious pashmina tucked away in a forgotten suitcase. When she wraps herself in it, she is transported to a place more vivid and colorful than any guidebook or Bollywood film. But is this the real India? And what is that shadow lurking in the background? To learn the truth, Pri must travel farther than she’s ever dared and find the family she never knew.

In this heartwarming graphic novel debut, Nidhi Chanani weaves a tale about the hardship and self-discovery that is born from juggling two cultures and two worlds. (Goodreads)

The story is indeed heartwarming. I went in not knowing what to expect. When I saw the advertisement for the book last year, I assumed it was a picture book, and even when I saw at the library I still thought it was a picture book for kids. I didn’t bother to look through it when I picked it up. I just saw it on a display shelf, recognized the cover as a book on one of my TBRs, and checked it out. It wasn’t until I finally sat down to read that I realized it’s a comic book. I was pleasantly surprised at that.

I also didn’t know it was a YA book until I started reading. (Yea, I didn’t look up any info at all on this book.) The protagonist struggles with common teenage concerns — learning how to drive and being teased for being different — in addition to seeking to know more about her culture and how it influences who she is.

Pashmina is an #ownvoices YA comic book written and illustrated by Nidhi Chanani, who was born in Kolkata, India, and raised in southern California, similar to the protagonist, Priyanka (Pri for short). Priyanka is a teenage girl who loves to draw comics. She is raised by her mother and does not know who her father is. A close family friend, uncle Jatin, serves as a surrogate father for her, but Priyanka gets jealous when she learns that Jatin and his wife are expecting a baby. She thinks she will lose the paternal relationship that has developed between them.

Priyanka is unsure of herself when the story begins and learning about the baby makes her feel even more insecure. She begins to inquire about her father, but her mother refuses to answer questions about him. Priyanka prays to the goddess Shakti for help and later discovers a pashmina that transports her to a vibrant India and makes her curious about her culture and other family members.

I could understand Priyanka’s frustration with her mother avoiding her questions because she so wants to know more about where she’s from to determine where she belongs. I admire her because she doesn’t allow her mother’s avoidance of the topic to dissuade her from her goal.

I like Priyanka’s development throughout the story because as she learns more about India, her family, and the story of the pashmina she found, she becomes more confident and grounded in who she is. We see this in how she asks people to refer to her. At the beginning of the story, she urges everyone to call her Pri because the shortened form prevents her from being teased by other teens and helps her to fit in at her school in California. But this changes as she accepts who she is and learns to appreciate Priyanka.

I enjoyed the story. It was heartwarming and I like that it focuses on the stories and experiences of women. I also love that it gives us some insight into Indian culture. For the most part, I think it was well done, but there are moments in the story where it’s not clear why Priyanka does certain things, such as when she turns down her teacher’s suggestion that she enter a comics contest. I assume it’s because she feels insecure about herself and creations, but I wish that was a bit clearer. I also like that the story focuses on a child being raised by a single parent and that Priyanka has a positive relationship with her mom. It’s a good story.

The style isn’t one I like, but I didn’t mind it. It’s sort of cartoonish. What I like, however, is the contrast between how Priyanka’s life is depicted and how her experience with the pashmina is presented.

Priyanka’s life is colored in shades of grey and her moments with the pashmina are washed in vibrant colors. At first I thought this difference was done to show America in shades of grey and India in color, but later when Priyanka visits India, both she and me were surprised that it wasn’t in color, or rather, in Priyanka’s case, she was surprised that it’s not as beautiful and vibrant as the pashmina showed it to be. Reality was a lot less pleasant. 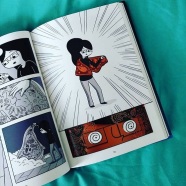 It’s a sweet story about a teenage girl trying to find out who she is and learn about her culture. I’ll have my eye open for more comic books by Nidhi Chanani.

The story reminded me a little of Anya’s Ghost by Vera Brosgol (illus.), which is a graphic novel about a girl from an immigrant family learning to accept who she is. It’s darker in tone to Pashmina.