With this, I complete a second book published by Nobrow Press. I own a few books by this publisher on my bookshelves, but it’s my nature to pay more attention to books I don’t own. Hence the two book I’ve read by this publisher were both borrowed from the library. But I don’t mind that. I’m just happy that I’ve finally read books published by Nobrow Press to confirm that they are one of my favorite publishers. I’ve always admired the books they feature on their IG account and now it seems that I’ll probably always like their content. 😊 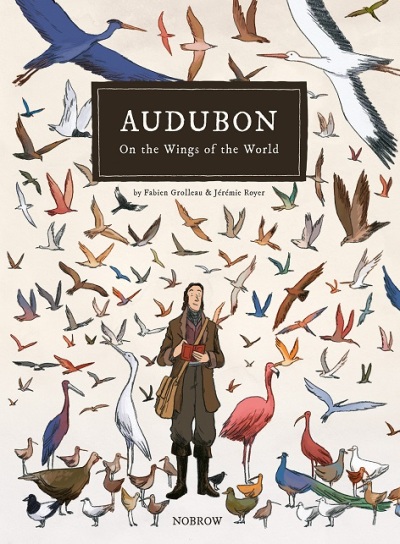 Audubon: On the Wings of the World by Fabien Grolleau, illus. by Jérémie Royer, trans. by Etienne Gilfillan

Audubon: On the Wings of the World is a biography of John James Audubon (born Jean-Jacques Audubon in Haiti in 1785), the noted artist, naturalist, and ornithologist most known for his book Birds of America, which contains 435 paintings of different species of birds in America observed in their natural habitat. Written and illustrated by Fabien Grolleau and Jeremie Royer, respectively, this graphic novel portrays Audubon as a passionate, determined man striving to paint and record all the birds of America in the 1800s.

Though Audubon’s persistence and efforts are admirable, the book does not shy away from showing less savory aspects of the man, such as his disdain for his mentor Alexander Wilson, the long lengths of time he spent away from his wife and children as he pursued his passion, the immense debt he gained from failed business ventures, and that he hunted and killed many birds in his pursuit to document and study them.

The graphic novel does not cover Audubon’s life in full. It focuses on Audubon as a man at the time when he leaves his family to fully commit to studying the birds of America, and the creators take some creative license regarding what they include, all of which is recorded in the “Notes” section at the end. Some key facts about Audubon were not included, such as that he kept slaves, while other things were condensed, like the character Shogan, who is “an amalgam of various people whom Audubon encountered on his travels; guides he met along the way, and Native Americans with whom he hunted.”

It’s then obvious that the purpose of this graphic novel is to give us a sense of who Audubon was, what he has contributed to science, and the lengths to which he went to make these contributions.

This book was not what I expected, but I’m glad I read it. Prior to reading it, I knew nothing about Audubon except that his name is associated with birds because of the organization, the National Audubon Society. I actually thought the name “Aububon” was used to refer to a type of bird.

For a graphic novel, Audubon is quite long, at about 174 pages, but it was totally worth reading. I was able to complete the book in a day. The narrative kept me engaged and I was curious to see what became of Audubon. It’s his ceaseless drive to accomplish his goal that drove this book and kept me interested until the end. Despite his faults, I couldn’t help admiring Audubon for recognizing his passion and pursuing it.

Upon completing this book, I wanted to throw myself headlong into my own passions and look up Audubon’s paintings and visit the places Audubon went to observe birds. I’m not sure how likely it is to accomplish the later of these goals since geography has changed over the years, but reading this book has made me appreciate what Audubon accomplished. In his paintings, and I guess his writings too, he captured aspects of nature in America that are now lost to us.

Reading this book with a modern perspective was both interesting and slightly humorous. There is a part early in the book where Audubon observes an odd characteristic of swallows that live in an old sycamore tree. According to Audubon, about 9,000 swallows nested in the tree. He observes that only a few birds begin to fly away in August. By the end of the month, the nests are empty and there are no birds there all through winter; but by spring, they return. He’s of course observing the birds’ migratory pattern, which I thought should have been obvious and made me roll my eyes, but then I laughed at myself realizing that such processes of the animal world probably wasn’t known at the time. Actually, this article in the Smithsonian Magazine states that Audubon’s “experiment [referring to a different event] was the first recorded instance in America of birdbanding, a now routine technique for studying bird migration.”

Reading this book also brought to mind how much America has changed since Audubon’s days. Forests aren’t as verdant as they were back then and neither are there as many animals. There is a part where Audubon observes a huge migration of passenger pigeons that lasts several days, which made me wonder if such a thing still happens. If not for the illustrations, it would have been hard for me to believe or fully imagine such an event.

There’s much I gleaned from this book, not just about Audubon’s life, but how America looked back when Audubon traversed it in search of birds. I enjoyed the book and would like to get a copy for myself. I guess my only critique of it is that the fantastical elements included in it didn’t work me. I wanted this book to be entirely nonfiction, so it was hard for me to accept those parts. I kept wondering if they were hallucinations Audubon had or things he believed in or if it was just the artist and writer taking creative license to present a facet of Audubon’s life in an interesting way.

I’m not a fan of the illustration style, but they were easy to follow and pretty detailed in some areas, which I appreciate. There’s nothing extravagant about the art. Actually it seems to avoid calling attention to itself. The emphasis is on the story being told and the illustrations simply help to facilitate the telling of it.

The panels were also easy to follow, however there was one part were I got a little confused because I wasn’t sure in what direction the panels flowed: horizontally first across both pages, or left to right down one page before moving on to the other.

A few of Audubon’s paintings are in the book and they are absolutely stunning. I love his style of paintings and greatly admire his talent. He has captured so much life in his work that it’s almost as if the painted birds are real and are about to fly off the page in some cases.

(I found the pics below on the publisher’s (NoBrow) website. You can visit it to see more from the book or to purchase it. I would’ve taken my own pics, but the book was due back at the library before I got the chance.) 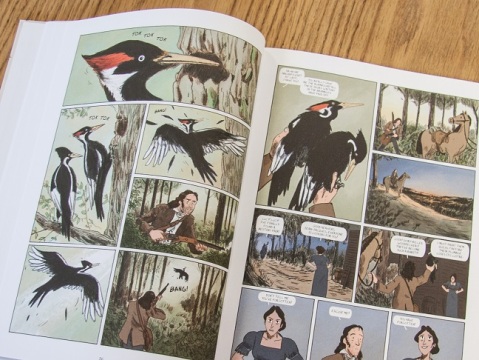 It was a great read and informative too. I highly recommend it.

Also, the Cap’n from Captain’s Quarters mentioned the John James Audubon State Park and museum in Kentucky on my recent book haul and now I’d like to visit there. It would be great if I could visit it this year since I just read this book.

The Cap’n also sent me a link to Audubon’s book Bird of America. Follow this link to see how extensive Audubon’s work is.

I think it’s worth the purchase, if you’re interested in it.