Life in Sunrise Valley is tranquil, but beyond its borders lies certain death. A dangerous black fog looms outside the village, but its inhabitants are kept safe by an ingenious machine known as the dam. Pig’s father built the dam and taught him how to maintain it. And then this brilliant inventor did the unthinkable: he walked into the fog and was never seen again.

Now Pig is the dam keeper. Except for his best friend, Fox, and the town bully, Hippo, few are aware of his tireless efforts. But a new threat is on the horizon—a tidal wave of black fog is descending on Sunrise Valley. Now Pig, Fox, and Hippo must face the greatest danger imaginable: the world on the other side of the dam.

Based on the Oscar-nominated animated short film of the same name, The Dam Keeper is a lush, vibrantly drawn graphic novel by Tonko House cofounders Robert Kondo and Dice Tsutsumi.

The Dam Keeper is such a sweet story. I fell in love with it, though I tried not to. I immediately took a liking to the Pig, though I really didn’t want to. You might be wondering why (or not). Well, it’s because the Pig is one of those woe-is-me characters that you’re supposed to immediately pity and sympathize with. I usually fight against that storytelling device, but always fail. I can’t help it. I’ll feel bad for the character, start urging them on, will want them to succeed, and will start liking them later when they grow some balls.

That’s what happened with this story.

Pig is an introvert. He’s sad and lonely and sorely misses his dad. He’s an orphan and an outcast and has the overwhelming task of protecting his town by maintaining the Dam. The townsfolk are lucky that he’s a smart, selfless Pig.

I enjoyed the story. I like how Pig, influenced by Fox and the new circumstances and surroundings they’re in, develops throughout the story and how the changes affect other characters, like Hippo. I like that the story is about the strength of friendship and the development of friendship without forcing it on readers, and I love that the story has a hint of darkness to it and starts out a bit bleak.

Before it was committed to book form and presented as a middle-grade graphic novel, The Dam Keeper was initially an animated short film produced by Robert Kondo and Dice Tsutsumi, who both worked at Pixar. With that in mind, I assume that the illustrations in the book are actually stills from the film.

I assume so because the illustrations have a digitized quality to it. The illustrations aren’t crisp and they have a bit of fuzziness around the edges as if colors at the forefront are about to bleed into those in the background. It gives me the impression that as soon as I turn the page, the shapes of the illustrations will disappear leaving just a swirling mass of color on the page.

Looking a bit closer, I realize that there is no defining black line used for the illustrations. So they aren’t drawn and then colored it. The illustrations are instead formed using color.

I actually don’t mind that and, surprisingly, like the effect — the fuzziness and colors threatening to blend into each other. This is weird of me because I tend to prefer illustrations with clean, definite lines and shapes with smooth textures and color blends. But I can’t help liking the work done here. I also love how the characters are drawn — they are cute — and love the color choices, which are mostly dark to match the tone of the story. My favorite panels are those of the characters in the woods with large shafts of light shining between the trees, which gives them a ghostly pallor. 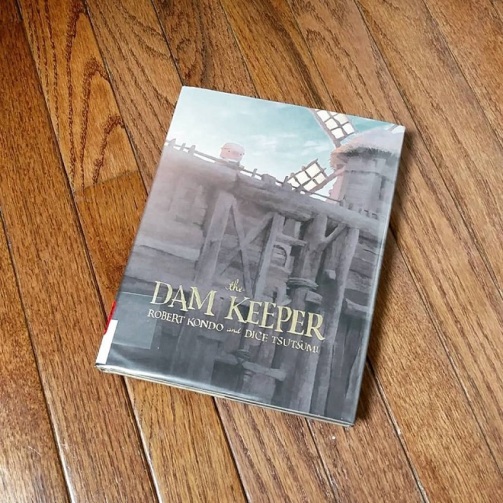 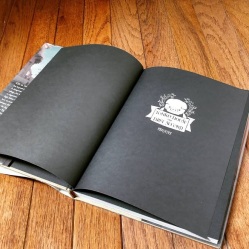 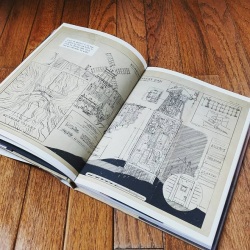 My favorite image in the book. Looks loads better IRL.

It’s a sweet story and one I’d recommend.

It’s also the first in a series, so I plan to get the second book when next I’m at the library.