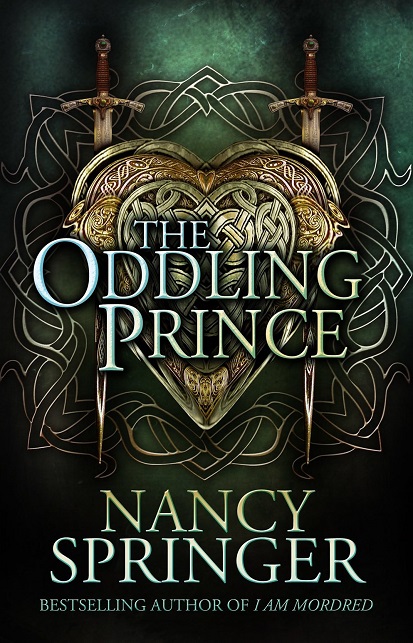 It wasn’t what I expected.

I requested an ARC copy from the publisher through NetGalley because the premise sounded interesting and the cover and title were appealing.

The Oddling Prince was an interesting read and a bit different from the YA fantasy novels that are popular these days. The story, set “in the ancient moors of Scotland,” focuses on Aric, prince of Calidon and heir to the throne. Aric is the only child of his parents. When the story begins, his ailing father is nearing death because of a weird ring that won’t come off his finger. The ring appeared suddenly on his finger one day while out riding. It seems to be draining the king of his vitality.

But at the moment when death is about to sweep the king away, a stranger magically appears, seemingly out of nowhere, and saves the king by removing the ring. The king is immediately healed, or so it seems, and the stranger, who seems fey in appearance, claims to be the king’s son. The king denies this. All members of the castle shy away from the fey stranger, named Albaric, because of his inhuman beauty but Aric and his mother, the queen, quickly and easily accept the stranger.

However, the king is unable to trust or accept Albaric as his son, and Aric becomes torn between his love for his father and his half-brother.

It was difficult trying to figure out my jumbled thoughts about this one. It has a fairytale quality about it that I liked, but the story was slow and quiet, so I was bored by it. It started out interesting enough. The ring and ailing king and mention of elves made the beginning quite compelling.

The ring made me think of the One Ring from Tolkien’s Lord of the Ring series because of its cunning and the effect it has upon the wearer. This plot device had a lot of potential. I didn’t expect what became of it by the end because I read expecting, and hoping, for a darker, more complex story.

I loved the mention of elves and that the tone of the story has a fairytale quality to it, as if I was reading a fairytale retelling. But there too the story fell short for me because I thought it would be emphasized. The fey are significant to the plot in that the elf queen’s action is what created the situation we read of but I expected, wanted, more fantasy and wonder in the story but didn’t get it.

As the story progressed, I lost interest. It just wasn’t appealing and Aric, whose perspective we read from, was not a compelling character. So despite the few fights and short adventure (which I thought was pointless), the story was largely uninteresting.

However, I kept reading because the story is fairly short, about 280 pages or so, and I didn’t mind the writing, though it was sometimes distracting. The writing is descriptive, which I always like, and made it easy for me to imagine the Scottish moors in which the story is set. However certain words, which I think are used to emphasize the place and period of the setting, distracted me because I was unfamiliar with them and they popped up often. Like “troth” and “sooth” and “forsooth.” It took me a while to get used to them. (That’s not something negative, but it’s part of my reading experience with this story so I mention it.)

Though I didn’t find the overall story appealing, aspects of some characters interested me. If I should select a favorite character from the story, it would be the king. He is the most nuanced. I love that we see him slowly devolve into an antagonist. In comparison, all other characters are quite flat, including the protagonist, Aric, which is probably why I think him so boring. But the king we see change over the course of the story. He becomes suspicious, choleric, and inconsiderate, and by the end has become a tyrant instead of the wise, wonderful ruler we are told he was.

As I read, I wondered at the cause of the king’s change in personality. Because we read from Aric’s naïve perspective, we are led to believe that the king becomes a dark version of his former self because of the ring’s effect on him. However, as I read I instead chose to consider this story as similar to fairytales that indirectly speak of dark truths of human nature and began to wonder if the king’s change is due to trauma that he’s incapable of overcoming alone.

Why the king changed

The elf queen placed the ring on the king’s finger to make him fall in love with her, but her plan backfired and instead she fell madly in love with the king. The elf queen stole the king away to Elfland against his will and forced him to stay there and become her lover. She got pregnant with Albaric and the king helped to deliver and raise him. But missing his human family, the king became depressed and because she felt sorry for him, the elf queen released the king.

The more I read, the more I believed that such an experience was horrific to the king because he was raped. He was taken advantaged of, forced to participate in acts he didn’t agree to, was bound to an unfamiliar world filled with unnatural beings, and prevented from returning home or seeing his family. He was prisoner. Because of this I sympathized more with the king than any other character in the book and became frustrated when other characters criticized him for being suspicious of a random dude who shows up saying he’s the king’s son and coincidentally happens to know how to save him. (Nothing’s a coincidence.)

I believe the king becomes darker, negative, and untrustworthy because he doesn’t know how to cope with his experience. He may not have remembered exactly what happened before, during, and after visiting Elfland, but subconsciously he reacts to the product of that experience — Albaric — who he is forced by his family to accept and is constantly chided for rejecting. I can imagine him feeling angry and possibly disgusted with himself and his family and especially Albaric but not understanding why, which drives the king mad by the end.

Because we read from Aric’s perspective, we are told that Albaric is the loneliest person (something like that), but I disagree because Albaric always has Aric and sometimes even the queen. The king is the loneliest and the most misunderstood. As a man, he feels shame for what happened in Elfland and as a king, he feels dishonored. He can’t confide his feelings in anyone because he lives in a patriarchal society and must always portray an outward appearance of strength and capability, so he suffers alone and is tortured by it.

Aric and Albaric’s relationship: why the king hates it

Aric and Albaric’s relationship were of huge interest to me as well because of how much the king disapproved of it. I can understand his reasons. As a king, one would not want one’s son and only heir to become chummy friends with a stranger who randomly pops up in the nick of time to save the kingdom and then claim to be the king’s bastard. Though Albaric refuses his claim to the throne, it still seems a bit fishy.

Also, based on what I’ve said above about the king’s time in Elfland, it’s possible that the king felt an immediate aversion to Albaric, though not knowing why, and so does not want Aric, his son and heir, to be associated with someone who brings up such strong negative emotions.

However, in addition to those reasons, I think the king is homophobic. The story is set in a kingdom that is strongly patriarchal where men must always prove their masculinity. Albaric is part fey and impossibly beautiful. People are awed by his appearance. As I read, I gathered that he’s probably also effeminate in appearance because after gaining a scar on his face, the king says that Albaric looks less like a “mollycoddle” after gaining it.

So…I think the king suspects the depth of love Aric and Albaric have for each other and disapproves of their relationship. Sure, Aric believes Albaric is his brother but the way Aric speaks of how connected they are, how in-tune they are with each other…I couldn’t help thinking of them as lovers rather than brothers.

In my mind, this is insta-love because Aric totally fell for Albaric the moment he saw him. He was immediately smitten and became more so the more time they spend together. I mean, the descriptions of Marissa, who later becomes Aric’s intended, doesn’t match up to the passages where Aric speaks of Albaric, how beautiful he is and how connected they are. Dude is totally in love.

How I read the story

So this is how I read this story: A king was kidnapped and raped by a woman and is deeply traumatized by the experience. It’s such a horrific experience that he doesn’t remember it but subconsciously reacts to it (his ailment and changes in behavior). Thus he is unable to welcome the strange boy who randomly pops up saying he’s the king’s son. When said boy befriends the king’s heir, the king becomes angry because not only does he dislike this random boy but the king’s “true” son has fallen in love with him. How unmanly!

Meanwhile, Aric is worried as his father nears death. He doesn’t want to lose his father, whom he loves dearly, and is unsure if he’ll be able to rule as well as his dad did. A random stranger shows up and save his father. A beautiful half-fey on a white horse. Aric immediately falls in love with the stranger and grows more strongly connected and enamored of him the more time they spend together. His mother approves of the relationship. His father hates it (it’s not manly!) and Aric is torn between his love for his dad and wanting to please his father and the love he has for Albaric, his half-bro and true love.

Reading the story that way made it more complex and satisfying though it also made me hate the ending. Whether or not I read it this way, I wouldn’t have liked the ending. I liked the healing parts, but nothing else.

I rate based on enjoyment and I was mostly bored by this. However I am glad that I completed it. The story wasn’t appealing and I didn’t like the end, but I like that it was easy to consider the events and characters in a way that sparked some interest in me and pushed me toward completing the book.

11 thoughts on ““The Oddling Prince” by Nancy Springer”