I have reviews and other stuff to post, but I’m so not in the mood for them. Instead, here’s a tag! 😀 Yep, these are more fun to do and quick too.

This tag was created by Naty at Naty’s Bookshelf. I wasn’t tagged. I found it on Never Not Reading and filed it away to do on a day like this — lazy weekend.

It’s a graphic novel about a guy who travels from the north pole to the south pole, where he meets his true love, but it’s impossible for them to be together. I’ve had this library book on my shelves for over a year now (or has it been two years). The librarian overlooked it when I sought to check it out, which has made it easy for me to procrastinate on reading it. I refuse to return it without first reading it, and — gosh damn it! — I better read it this summer.

A book I got as a gift

I love this set of covers for the books which were designed by Kazu Kibuishi. Oh my gosh! I immediately fell in love when I saw them and loved that the spines form a picture of Hogwarts. The front of the box shows us Hogsmeade. The illustrations are wonderful and made me eager to try some of Kibuishi’s work, which I did and liked (see my review of Amulet, Vol. 1). My cousin bought it for me because she’s awesome 😀 …and because she knew that I really, really, REALLY wanted it. 😀

The Secret of the Old Clock by Carolyn Keene

I was hooked on the Nancy Drew books as a kid. They were such fun to read and I reread them often. The first in the series, The Secret of the Old Clock, was my favorite because I didn’t have a copy so I reread it the least, which made me miss the story.

I love this book. It’s about a competition between two magicians to see whose protege is the best and they use the circus as their stage. It’s also a historical novel because it’s set sometime in the past and hints at leading up to the present. The circus is a magical setting and it seems that the magic within it gradually suffuses not only the characters, but the entire book and even me, the reader, as I read. I felt transported and totally enchanted as I read. It’s one of my favorite books.

It’s a historical paranormal novel about a woman who falls in love with an amphibious man. I love this story and how it’s written. I also like the slow development of the romance but what I love is the character development. I watched the movie first and loved it, so I appreciate that the book gives us more insight into the characters.

I read this novel so long ago that I’ve forgotten what it’s about; but I do remember that I liked some parts of it and that it’s erotica so it is steamy. Actually, just about all of Zane’s books are steamy. I’ve read almost all of them. 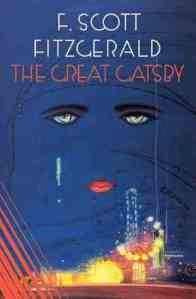 My copy is so old that it’s battered and torn. I took it from my dad who got it from a friend who passed away. After reading the copy, I kept it telling myself that I’m saving it from further abuse. Plus, I doubt anyone else in my house will want to read it. I’d like to get a new copy though because The Great Gatsby is one of my favorite classics. I don’t like the story. I love it for the descriptive writing.

A book that makes me happy/laugh

Jenny Lawson’s memoir about her battle with mental illness, which is a serious topic, but Lawson includes loads of humor in it. It was a good read.

A book that made me emotional 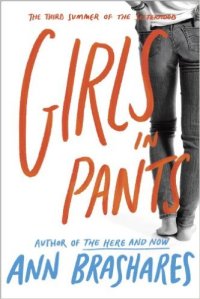 Girls in Pants by Ann Brashares

The third novel in the Sisterhood of the Pants contemporary YA book series about the friendship between four girls. It’s a sweet read that’s perfect for summer but some parts made me tear up a bit. It happens in each one of these books.

A book with an ending I dislike

A YA fantasy novel about a king who falls ill due to an enchanted ring and is changed by it once it’s removed…well, the book is about his son but the changes to the king propels the story. Because of how I interpreted the story, I didn’t like the ending much. I think even if I read the story as it’s presented, I still wouldn’t have liked the end.

A book I wish had illustrations 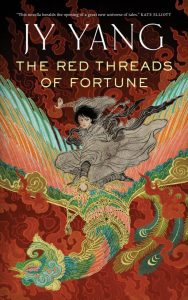 The Red Threads of Fortune by J.Y. Yang

Because I want to know what a naga looks like. I imagined them as dragons, but dragons were mentioned as a separate entity because Mokoya observed dragon images used for decorations once (I forgot where). This is the second novella in the Tensorate series about a set of twins who try to undermine the tyrannical rule of their mother.

But I also wish all the novels I read had some illustrations in them.

A totally engrossing fiction novel. I was off work yesterday and was so happy that the weather man said it would rain because I had George R.R. Martin’s A Storm of Swords and Robert Jordan’s Lord of Chaos to read and a bottle of wine to see me through them. But the damn weather man lied to me and I saw not a drop of water fall from the sky though the air was heavy with moisture. A word of advice: Never trust a weather man. Go outside and stick your tongue out to taste the air and judge the weather for yourself.

you who just came,

25 thoughts on “What’s On My Bookshelf Tag”