Sadly, I’ve fallen so far behind on reviews that I’m still writing reviews of books I completed in April now. Today I have for you comic book reviews.

The first one, Zodiac Starforce, #1, I read for the O.W.L. Magical Readathon that was held in April. This review should have already been up, but no. I procrastinated, and now I’m posting it a month before the follow up readathon — N.E.W.T.s Magical Readathon — begins. The other two — Elves, Vol. 1 and Monstress, Vol. 2: The Blood — were both read for the Wyrd & Wonder readathon, which is a month-long readathon in May of all things fantasy.

Anyway, my intention this week is to clear out my review queue; so fingers crossed that I’ll actually achieve this. 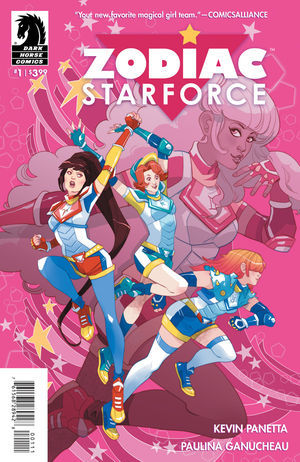 The series is about a group of teenage girls who possess magical powers and use them to protect their planet from dark creatures. This issue opens with the group disbanded and one of the members, Kim, hoping to get everyone back together again. While doing so, she’s also investigating a student’s disappearance and later learns, along with her group of superpower friends, that one of the group members is infected with dark energy. (Goodreads)

I was surprised that despite how short this issue is (about 32 pages), I got hooked on the story and wouldn’t mind reading the entire volume. The story progresses quickly. I was more interested in the mystical parts of the story and worried that teenage drama would bog it down. It didn’t. Well, not in this issue. But it ended on such an ominous note that I know I’ll eventually get my hands on the first volume so I can find out what happens next and if the girls manage to save their group member.

Another reason why this comic book appeals to me is because the girls’ superhero personalities are named for zodiac signs and each girl’s power is linked to the sign she represents. For example, Gemini is associated with twins so Emma, the character who’s linked to that sign, can split between two worlds. (This doesn’t occur in this first issue, but the writer mentions it in an interview included at the back.) I think that’s really cool! So of course I want to read the full volume to find out what Pisces (my sign) can do.

I love the illustration style and the colors used, although, overall, it’s all very pink. The colors pop but aren’t overbearing, and the illustrations are easy to follow and understand, even in fight scenes.

I love how the main characters are drawn. They are diverse in body type and race (and apparently there is LGBT representation in the story too; I didn’t see much of this in this issue, but volume 1 has a tag for it on Goodreads). I love their superhero outfits. It makes me think of Sailor Moon and Power Puff Girls. The art style is very cute and makes me think of Archie as well. I like it.

It’s a good start, and I’d like to continue with it. 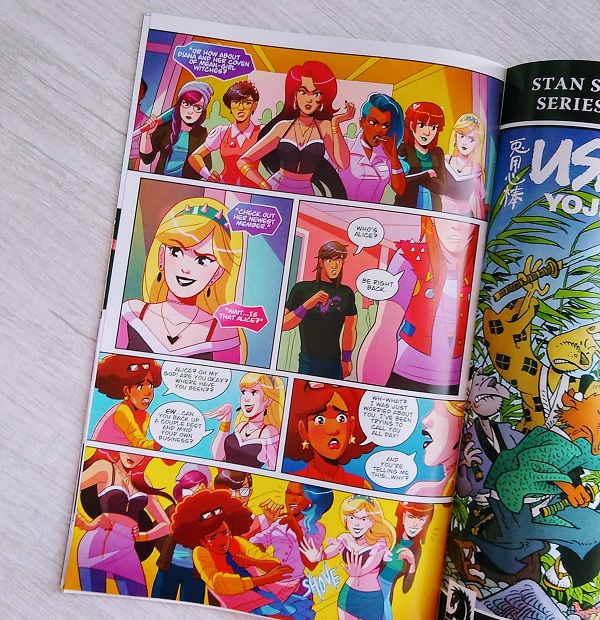 Elves, Vol. 1 is the beginning of a translated French high fantasy comic book series. In this volume, we are presented with two stories. The first, “Part 1: The Crystal of the Blue Elves,” focuses on the Blue Elves, who all live near water, and is narrated by Lanawyn, a Blue Elf, who, along with her human friend, Turin, discovers that all the Blue Elves of Ennlya have been murdered. They begin an investigation that leads them to believe humans are to blame. Meanwhile, a young Blue Elf called Vaalann is believed to be the one destined to carry the Sacred Crystal and begins a dangerous test to determine if that’s true.

The second story, “Part 2: The Honor of the Sylvan Elves,” focuses on the Sylvan Elves, who all live in the deep forest. It’s about a human girl who risks great danger to seek help from the Sylvan Elves to save her kingdom from invading orks. However, while seeking the Elves’ help, she learns that she’s connected to the druids. (Goodreads)

I was excited to read this comic book series when I first saw it online. I loved the cover and loved even more that it was a high fantasy-inspired comic book. But it wasn’t what I expected.

Sure it has elements of high fantasy with the variety of creatures included, magic, and epic journeys, but the story wasn’t as tight as I would have liked. I guess because it’s a comic book the creators were limited on the amount of pages they could include, but I found the story lacking because it often progressed too quickly, and I couldn’t see what connects the two parts of the book to consider both part of the same story. So instead, I viewed them as separate, like short stories.

In the Blue Elves story, I was annoyed at how quickly everything was resolved. Basically, Lanawyn shows up in the nick of time to take action and offer an explanation that everyone easily accepts. It was too sudden and quick, so it made me wonder if Lanawyn is evil and she’d just cast a spell on everyone.

In the Sylvan Elves story, someone died too quickly, in my opinion, and I hope that person is later revived because that person only used their awesome power once.

I’m debating whether or not to continue with this series. I’d like to read one cohesive story. I don’t like how disconnected the two parts seem to be to each other. If I decide to continue, I’ll instead rent a copy, if my library has it.

The illustrations are great. I admired how detailed they are, and I especially liked characters’ expressions, such as whenever someone sneers or frowns. However, it’s not my favorite style, so I wasn’t crazy about it; but it’s obvious how talented Duarte is.

It’s okay; it’s just not to the level I thought it would be. 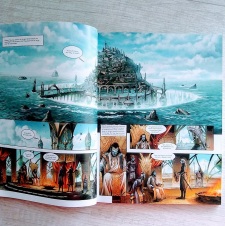 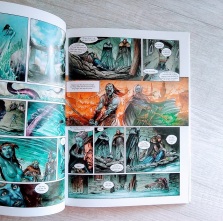 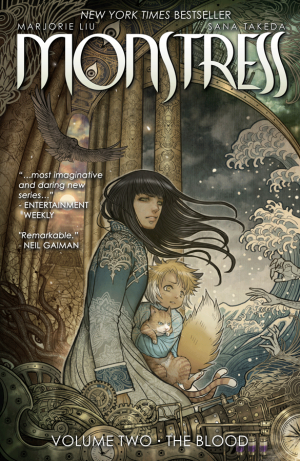 Maika Halfwolf continues her search for information about her mother and the monster inside her (Maika). In this volume, we learn more about the monster, the gods, and the makings and operation of this fantastic world. We also learn that Maika’s mother wasn’t exactly the sweet and doting kind and that she’d visited a mysterious island to visit a crazy fox dude. (Goodreads)

My thoughts: (some spoilers)

For me, this was another great volume. I enjoyed volume 1 and enjoyed this one as well. I love that we get to visit a different setting, the port city, Thyria, and see there individuals who are part sea creatures. It’s all very interesting. I’m as amazed by this world as much as I’m hooked on the story and in love with the art. Such a combination makes reading this a great joy despite how dark the story is.

I’ve suspected it, but it seems that the monster inside Maika is one of the old gods, and the more it remembers, the more dangerous it seems to get. Its presence is threatening, and I wonder if once it remembers all if it will then turn on Maika. It also seems to consume Maika whenever it’s power is used. What would happen to it if Maika’s body is gone?

This one left me with lots of questions, but good questions that make me eager to read the next volume. Since the crazy fox dude is now loose, what will happen? What will he do? And I can’t wait to see what kind of meeting will occur when Maika eventually meets her surviving family members — her aunt and grandmother. Who and where is her father??

Other than all that, I enjoyed Kippa and even the necromancer.

Love the detail and design and how all the characters are drawn, especially Kippa. In this volume, the new characters whose design I love are Seizi and his brother, the two tigers who head a trading company; Kenzi, the captain of the Jolly Ravager; and Maika’s grandmother and aunt, who shockingly closely resembles Maika’s mother (are they twins?).

Of course, I also love the illustrations of Kippa. She’s so cute!

I enjoyed reading this and can’t wait to get stuck in the next volume.

It’s totally worth it. 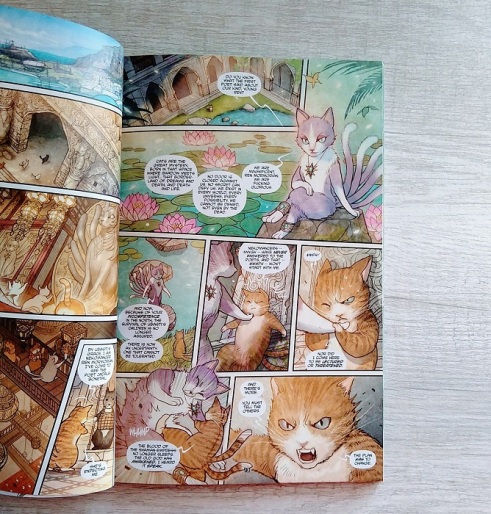