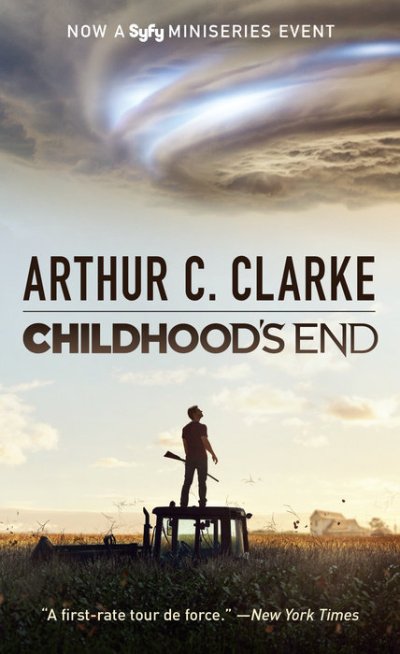 I’m convinced that science fiction works for me only as movies and TV shows. I don’t take well to it in novel form.

I was eager to read Childhood’s End because I’d seen the TV miniseries that aired on SyFy a couple years ago. I think it was three episodes total, and I liked the first two but didn’t like how it ends. I thought the book would be better, but the show has since grown foggy in my mind so now I can’t tell. I just know that I enjoyed watching the TV show more than reading the book.

Childhood’s End is one of the defining legacies of Arthur C. Clarke, the author of 2001: A Space Odyssey and many other groundbreaking works. Since its publication in 1953, this prescient novel about first contact gone wrong has come to be regarded not only as a science fiction classic but as a literary thriller of the highest order.

Spaceships have suddenly appeared in the skies above every city on the planet. Inside is an intellectually, technologically, and militarily superior alien race known as the Overlords. At first, their demands seem benevolent: unify Earth, eliminate poverty, end war. But at what cost? To those who resist, it’s clear that the Overlords have an agenda of their own. Has their arrival marked the end of humankind . . . or the beginning? (Goodread)

I’m glad to have read a sci-fi classic. Unfortunately, I didn’t like it. It didn’t work for me. The story presents some interesting ideas about the evolution of humanity, which is brought about by an alien race, but it didn’t appeal to me and I didn’t believe it. It turned me off, actually, and the reason why is because I disagree with the author’s vision. Because of that, I won’t go in detail because Clarke was only presenting what he imagined would happen in his story’s situation, so my discussion will just be a ranty argument.

There was nothing about the story that appealed to me in its novel form. The characters didn’t work for me and seemed to lack development, and so, too, the plot. The story instead places more focus on the topics and ideas that arise from this peculiar situation of having an alien race intimidate humans to reveal them for the children they are. Then that race helps humans to better themselves by having humans put away childish things — war, religion, etc. — before revealing themselves to have a close likeness to the monster humanity has feared for centuries (I actually liked this part). This alien race ushers in a new age where there’s no war or strife, and humans are able to pursue interests at their leisure and tend to live longer, but it’s all for an evolution humanity will not expect.

This book is a great one to discuss. I think I would have enjoyed it better if I’d buddy-read it or was able to discuss it afterward with someone who had read it. Since I read it purely for enjoyment, it didn’t work for me. It’s interesting that this is the case for me with books. I don’t have this difficulty when watching a TV show or movie. I also tend to be more open to the sci-fi genre in those forms. However, this will not be my last sci-fi novel. I intend to try again. I think Clarke’s writing may have also thrown me off because I didn’t like it and found it difficult to get into the story.

Meh. I guess it’s a decent read since everyone says so, but it didn’t work for me. Also, my book is an updated version where parts of the beginning was changed by the author to fit a more modern time, but I think the beginning would have been more impactful if it had retained the race between the U.S. and the U.S.S.R., which was in the original.