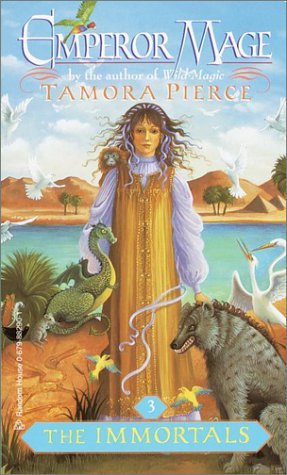 Either this book or In the Hand of the Goddess was the first book I read by Tamora Pierce. So many years have passed since that day that I can no longer remember, but I recall that I loved Pierce’s Song of the Lioness and Immortals books and would reread them often. Now that I’m revisiting them years later, I find that I still enjoy them despite their shortcomings in certain areas.

Daine must confront a powerful leader in this third book of the Immortals series, featuring an updated cover for longtime fans and fresh converts alike, and including an all-new afterword from Tamora Pierce.

When Daine is sent to Carthak as part of a Tortallan peace delegation, she finds herself in the middle of a sticky political situation. She doesn’t like the Carthaki practice of keeping slaves, but it’s not her place to say anything—she’s only there to heal the emperor’s birds. Her worries only expand once she learns that her own power has grown in a dark and mysterious way.