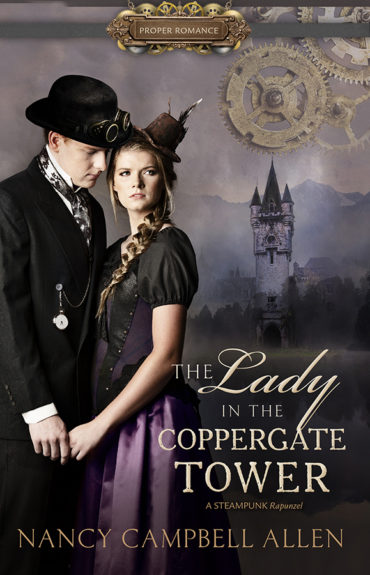 I continue with the Steampunk Proper Romance series. This time, a beautiful young woman with long golden hair is whisked off to a tower in Romania by her mysterious uncle to help her supposedly crazy twin sister.

Hazel Hughes has spent her life believing she is a Medium—someone who can talk to ghosts. But as of yet, that skill has remained frustratingly elusive. She is also suffering from a reoccurring childhood dream of someone who looks almost exactly like Hazel, but this dream version of herself is slowly going mad.

Sam MacInnes is a talented surgeon who runs in the highest social circles thanks to his family’s position and history. When Sam hires Hazel to assist him with his medical practice, he is immediately drawn to her intelligence, wit, and beauty.

Their potential relationship is derailed one evening when a mysterious count arrives in London and reveals to Hazel the truth about her past: she was abducted at birth and her twin sister has fallen dangerously ill.

Hazel agrees to travel to Romania with Count Petrescu in order to save her sister, and Sam insists on accompanying her. The count has secrets, though, and the journey grows more sinister with every mile that draws Hazel closer to her homeland. Even as her feelings for Sam become deeper and more complicated, she fears she might not survive the quest to save her sister with her heart intact, not to mention her life. She must learn to draw on gifts she doesn’t know she has if they are going to ever return home again.

Hazel and Sam must fight their way past dark magic, clockwork beasts, and their own insecurities as they try to reach her sister in the impenetrable Coppergate Tower before time runs out. (Goodreads)

I’m still enjoying Allen’s Steampunk Proper Romance series. They are such fun to listen to, and I’m surprised that I’ve managed to listen to all three books so far published in the series on audio. Audiobooks are not my preferred format for reading because I find it hard to focus on writing and such details through this format. However, audiobooks are handy in allowing me to consume stories when my hands and eyes are otherwise occupied, like when completing boring tasks at work. And that’s what led me to try Allen’s steampunk romance series — I needed something to listen to while at work.

So far, the books in this series seem to be a mashup of a fairytale and a classic novel. The first novel, Beauty and the Clockwork Beast, was inspired by both the fairytale Beauty and the Beast and the classic novel Jane Eyre. The second novel, Kiss of the Spindle, was inspired by Sleeping Beauty; however, I couldn’t tell what classic novel influenced it. But The Lady in the Coppergate Tower is a mashup of Rapunzel and Dracula. Unfortunately, as exciting as such a combination sounds, this one wasn’t as enthralling as I thought it would be.

What I liked were the steampunk elements included, like Count Petrescu’s elaborate submarine (I forgot what it’s called in the story), and the twist on the lore of the vampire Dracula. There are vampires in this world, but the character who embodies characteristics of the notorious vampire has a twist to his backstory that I liked. The mystery surrounding the attacks on the submarine, Hazel’s (the protag) twin sister, and Count Petrescu’s motives were interesting as well, but not as strong as I’d like them to be. I also liked the personality of the automaton Eugene. He was obviously included for comedic effect, which worked well to break up the pining between the two lovesick characters.

And that was my issue with the story: the romance because it’s the type of romance I often don’t like. Hazel and the doctor, Sam MacInnes, are both attractive, work often together, know each other well, and are OBVIOUSLY attracted to each other. We get to read from both their perspectives and learn early on that they are both attracted to each other but think the other person isn’t interested. This annoyed me. I can’t stand it when characters agonize about things that could easily be resolved (by talking) or that would have been resolved early on but the characters refuse to believe the obvious gestures of romantic interest. This annoyed me the entire time I read. And although the Knowelden did a great job, her narration annoyed me too, but that’s because I was in a crummy mood when I listened to this.

Another issue I had was the lack of world building. I really want to know more about this world and the creatures in it and how they are treated. I have been hoping for some explanation since the first book. I thought that I would get it in the second novel, but it was only hinted at. Now I’ve slowly began to accept that I’ll probably not get it. (Part of me still hopes for it in the next book.)

Regardless, I am looking forward to the next book in the series, and I can already tell that it will be inspired by Cinderella, my favorite fairytale, so I am eager to read/listen to it. Another thing I like about the series is that characters from the previous books pop up in the next one to give a sense of continuity, but the books can be read out of order.

It was okay but I had some issues, so I didn’t enjoy it as much as I thought I would.

8 thoughts on ““The Lady in the Coppergate Tower” by Nancy Campbell Allen, narr. by Elizabeth Knowelden”