It’s Women’s History Month (and my BIRTHDAY week), so here’s the Women’s History Book Tag that was created by Margaret at Weird Zeal. I got lucky and was tagged by Lauren at Narrative Paradise.

The Wilful Princess and the Piebald Prince is a prequel to Robin Hobb’s Realm of the Elderlings series. Princess Caution’s trusted servant, Felicity, tells us about the headstrong princess and the Witted son she bore. Unfortunately, the princess’s stubbornness caused more heartache and political upheavals than positive change.

If you’re interested in the Realm of the Elderlings series, a high fantasy series set in a fantastic world and filled with amazing characters, do not start with this book. Start with the Farseer trilogy, which begins with Assassin’s Apprentice. 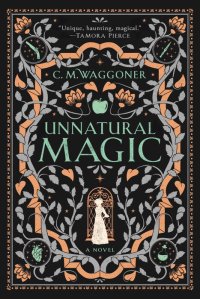 Onna is one of the protagonists from C.M. Waggoner’s Unnatural Magic, which I recently buddy-read with Millie from Milliebot Reads. The novel is about Onna becoming a magician and later investigating the murders of trolls and about the relationship that develops between Jeckran, a human man, and Tsira, a troll.

The story is fantasy, of course, and slow-paced, but I really enjoyed it. Onna is intelligent and unafraid to pursue her goal to become a magician despite what some men in her country believe. I admired and liked her character the most. Also, like Ada Lovelace, she is a mathematician and is skilled at making quick magic calculations in her head. 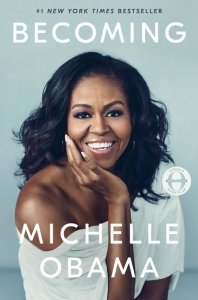 I just wanted to mention the former First Lady of the U.S. 🙂 She’s inspiring and absolutely amazing and used her position of power and influence to increase education opportunities for young girls around the world.

I highly recommend that you read her autobiography, Becoming, if you haven’t already done so. In it she talks about her upbringing, her courtship with President Obama, her career and experiences as a mother, and her time in the White House as First Lady.

I did not love this book (although I gave it 5 stars), but I admired the writing and it does tell a great story. The Snow Child is a historical fiction novel with a hint of magical realism set in 1920s Alaska about an old couple who yearn for a child and supposedly make one out of snow. The story is inspired by the Snow Child/Queen fairytales.

The writing is absolutely beautiful and transportive. It made me want to visit Alaska.

Of course, I had to go with my childhood favorite, Alanna of Trebond. Alanna is the protagonist of the Song of the Lioness quartet by Tamora Pierce, which are YA fantasy novels about a girl wants and succeeds in becoming a knight by posing as a boy. The books are fun reads and I thoroughly enjoyed them as a kid.

All Systems Red by Martha Wells

I hardly ever read sci-fi, especially books set in space, so my choices for this category were very limited. I chose here All Systems Red by Martha Wells because it’s not set on earth and involves some space travel. It’s a novella about an android whose job is to protect a bunch of scientists exploring a new planet, but it really just wants to be left alone to watch TV. It’s a quick, humorous read.

I don’t understand why more people aren’t talking about this fantastic novel. It’s a historical fiction novel with some magical realism that’s set in Uganda. The story stretches from year 1750 to 2004 and follows the cursed bloodline of the Kintu clan. The story is amazing, the writing is beautiful, and the book is totally worth reading. It made me think of Gabriel Garcia Marquez’s One Hundred Years of Solitude, but not as potentially confusing with the characters, lol. 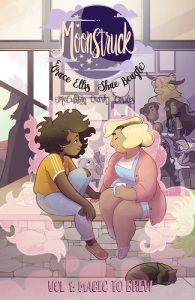 Moonstruck is a comic book set in a college town about a young werewolf about to start a new romantic relationship and a group of friends who are trying to help a centaur get back his original body. Just about all the characters are fantasy characters. I think there was one human. The story is fun and I LOVE the illustrations. 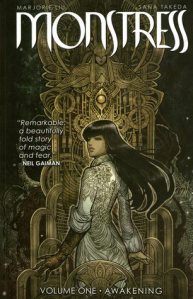 Definitely the Monstress comic book series by Marjorie Liu. They are high fantasy comics about a young woman who’s trying to find out about her mother and her past while trying to manage the monster that has awakened inside her. The story is dark but intriguing and the illustrations are absolutely amazing. I HIGHLY recommend it for both the story and the art.

Women who inspire me:

All the women in my family, especially my mom, grandmom, and aunties. 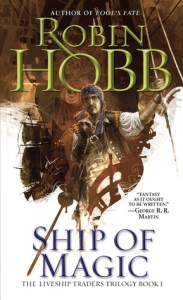 Ship of Magic by Robin Hobb

I didn’t choose a book that inspires me; I instead chose a book where the women are the heroes. In Robin Hobb’s Liveship Traders trilogy, it’s the women who drive the story and who are the heroes. These books are filled with high seas adventures and fantastic creatures, places, and characters. They are the second trilogy in the larger Realm of the Elderlings series.

Actually, I could have selected the entire Realm of the Elderlings series because although some books have a male protagonist, it’s the women who often drive the story or who are the heroes. In my life, my mom, grandmom, and aunties are often the heroes too 🙂

I’m not tagging anyone, but if you want to do this tag too, consider yourself tagged.