How do you organize your bookshelves?

Everyone does it a different way. If I had the space, I’d have only one row of books and organize them by genre and then alphabetical by the author’s last name. It would make it easier for me to find my books, and my shelves would look neater as well. Or, I might amuse myself by organizing them by color or by size. That would be aesthetically pleasing to my living space.

But that’s a dream for now. In real life, my shelves are organized by genre only, which you’ll be able to tell as you follow along with this tour. I try to keep series together or books by the same author within a genre together, but after that it’s whatever book I grab goes into whatever space it can fit — a free for all almost. I do try to place the hardcover books in the back, since they are usually taller, to make my shelves seem neat, but it’s mostly so that there’s enough space above the row of books to stuff in more books.

I also separate books by the ages they are intended for, so middle-grade books, YA books, and adult books are all on separate shelves. But you might find an errant book mixed in somewhere it’s not supposed to be. That’s probably because I got frustrated and placed it in whatever space I found. That happens sometimes. I’ll wake up on a bright sunny day with high hopes of successfully organizing my shelves only to be surrounded by mountains of books at nightfall having made little progress (due to stopping to read or reminisce about a book) and feeling so frustrated that I just start throwing books on the shelves and giving up, lol. 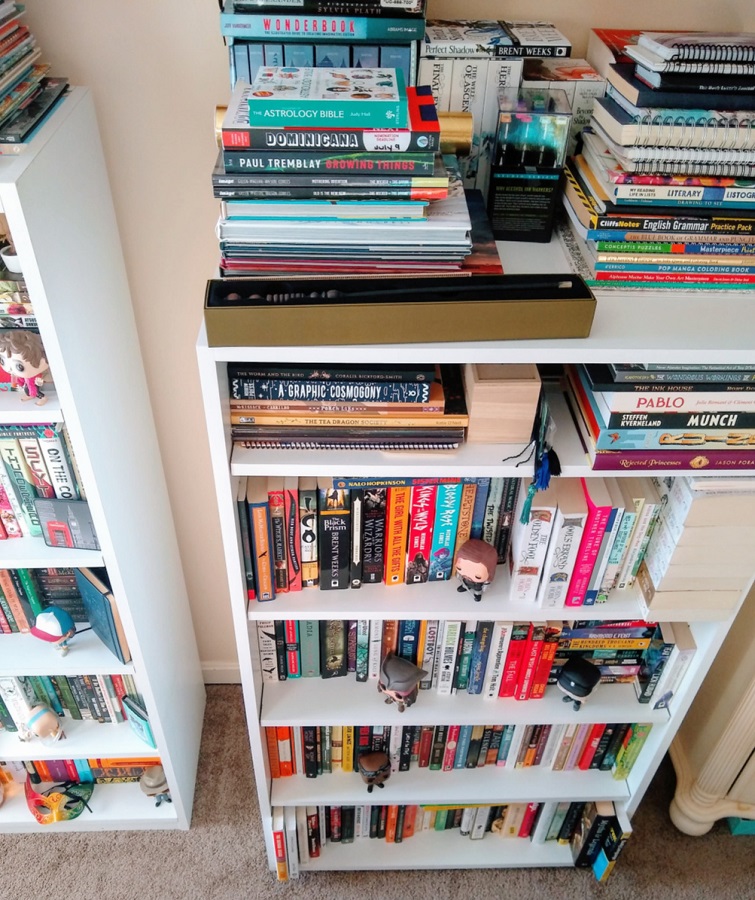 …but we’re touring the second shelf from the bottom which houses my general fiction books (basically every genre except fantasy). We’re on the second row now. Take a look!

You Can’t Keep a Good Woman Down: Short Stories by Alice Walker

Read this years ago. I consider a classic of African American urban fiction. It’s about a Black man who goes to jail for gun possession.

Another one I read long ago and consider a classic of Black urban fiction. It’s about a young Black woman who becomes addicted to heroin.

Historical fiction with a touch of magical realism and beautiful writing. It’s set in 1920s Alaska and is about an old couple who yearn for a child.

African American classic and one of my favorite books!! I need to reread it. The setting is inspired by Dante’s Inferno. It’s about the inhabitants of a prosperous Black community who are all chasing the American dream.

It made me think of Toni Morrison’s books. I didn’t like it and don’t intend to reread it, so I might unhaul it. It’s about a boy and his grandfather who are trying to protect the boy and his little sister from their drug-addicted mother’s influence. A tough one to describe in a few words.

Men We Reaped by Jesmyn Ward

Salvage the Bones by Jesmyn Ward

The Brief Wondrous Life of Oscar Wao by Junot Díaz ★★★★★

I really enjoyed this book when I read it. I attempted to reread it once but was bored. I blamed my mood; will try again. It’s about a Dominican teenage boy name Oscar who lives in New Jersey and his family.

I was so hooked on this 🙂 It’s a horror novel set in a small town in Virgina. It’s not very scary, but the end was a little creepy to me.

I consider it a modern day classic and it’s one of my favorites. It follows the descendants of two sisters from Ghana, one who was sold into slavery and another who married an English man who trades in slaves.

The Jamaican Ninja by Richie Drenz

The Signature of All Things by Elizabeth Gilbert

I forgot I had this book! Lol! I need to read it.

One of my favorite romance novels. It’s about a young Black woman studying for her PhD in NYC who falls in love with an investment banker from Côte d’Ivoire.

The Other Boleyn Girl by Philippa Gregory ★★★★★

I reread this last year or the year before that and was as hooked as the first time I read it. It’s historical fiction about Anne Boleyn’s sister. Anne was one of Henry VIII’s wives.

The Book of Night Women by Marlon James ★★★★★

One of my favorite books. It’s historical fiction set on a slave plantation in Jamaica. I need to reread it.

I’m beginning to wonder if I’d give all these books I read long ago 5 stars today. I was very generous with those 5 stars, lol. But, yeah, this was a good read too and I do consider it a favorite. It’s historical fiction about two sisters who grow in Jamaica and leave the island to emigrate to the U.K.

The Invention of Wings by Sue Monk Kidd

The Dumb House by John Burnside

Everything I Never Told You by Celeste Ng

Another of my favorites. It’s historical fiction with some magical realism thrown in and the form of the story strongly reminds me of One Hundred Years of Solitude. It’s set in Uganda and is about the cursed bloodline of the Kintu clan. Great story and amazing writing.

Girl in Translation by Jean Kwok

Wizard of the Crow by Ngũgĩ wa Thiong’o

The Kite Runner by Khaled Hosseini ★★★★★

A lot of my favorite books are in this row, I realize! Here’s another. It’s historical fiction mostly set in Afghanistan that tells us about the friendship between a wealthy boy and his servant as well as how the country is thrown into turmoil.

My Brilliant Friend by Elena Ferrante

The Elegance of the Hedgehog by Muriel Barbery

The Fishermen by Chigozie Obioma

The Root Worker by Rainelle Burton