Hardcover vs. paperback: Which do you prefer?

I’ll choose a paperback every time. I just don’t see the appeal of hardcover books. Those things are heavy! And they always poke me in my eye. I don’t like them, and I don’t think they like me. 😦

I have a few hardcover books on my shelves. They got there either because I was too excited for a book and couldn’t bother waiting for the paperback to be published years later, or because they were bought second-hand so the hardback was cheaper than purchasing a brand new paperback, or because it’s a series and the first couple books are hardcover so I continued with that to keep the books the same size. (This last one only applies to my Rick Riordan books.) Otherwise, it’s paperback all the way.

And it’s trade paperback I prefer, not those mass market ones. The trades often have better cover design, I think; and more of them can fit on my shelves than those horrible hardcovers. Sometimes the designers do something fun on the hardcovers, like sprayed edges and stuff, which makes me mad because that means I have to buy the hardcover. I’m a sucker for a beautifully designed book. Still, those things are too damn heavy and take up too much space. I can’t love them. I prefer my trade paperbacks, which are the majority of the books on this 3-books-deep bookcase we’re still touring.

We’re on the last row of the second shelf from the bottom, which happens to have a bunch of hardcover books on it. Take a look…

Some dark spines there. They are all fiction except two, which are nonfiction.

The Garden of Evening Mists by Tan Twan Eng 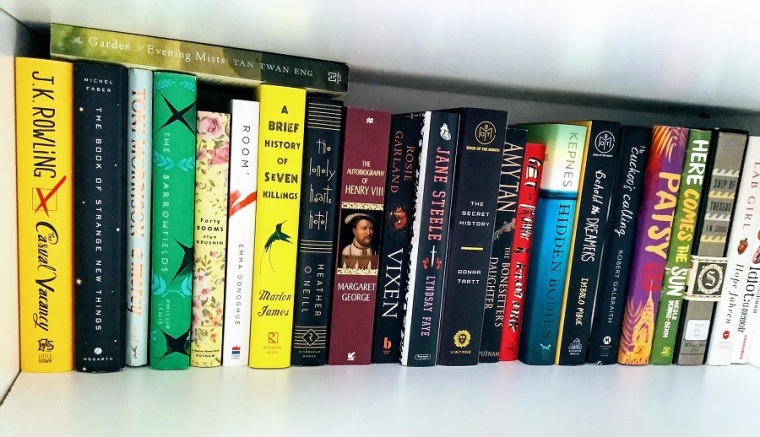 The Casual Vacancy by J.K. Rowling

The Book of Strange New Things by Michel Faber

A Mercy by Toni Morrison

The Barrowfields by Phillip Lewis

A Brief History of Seven Killings by Marlon James

The Autobiography of Henry VII: With Notes by His Fool, Will Somers by Margaret George 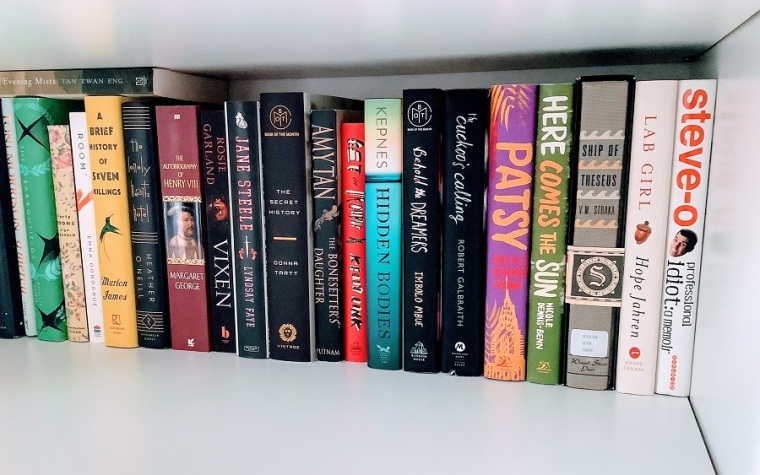 The Secret History by Donna Tartt

The Bonesetter’s Daughter by Amy Tan

Get in Trouble: Stories by Kelly Link

Behold the Dreamers by Imbolo Mbue

The Cuckoo’s Calling by Robert Galbraith

I read this last year and really liked it. I love how Dennis-Benn writes. It’s about a Jamaican woman who moves to the U.S. to be with the woman she loves leaving her daughter behind on the island.

I read this years ago, probably when it was just published. I liked the crazy Wildboyz TV show, so I didn’t mind reading Steve-O’s autobio.