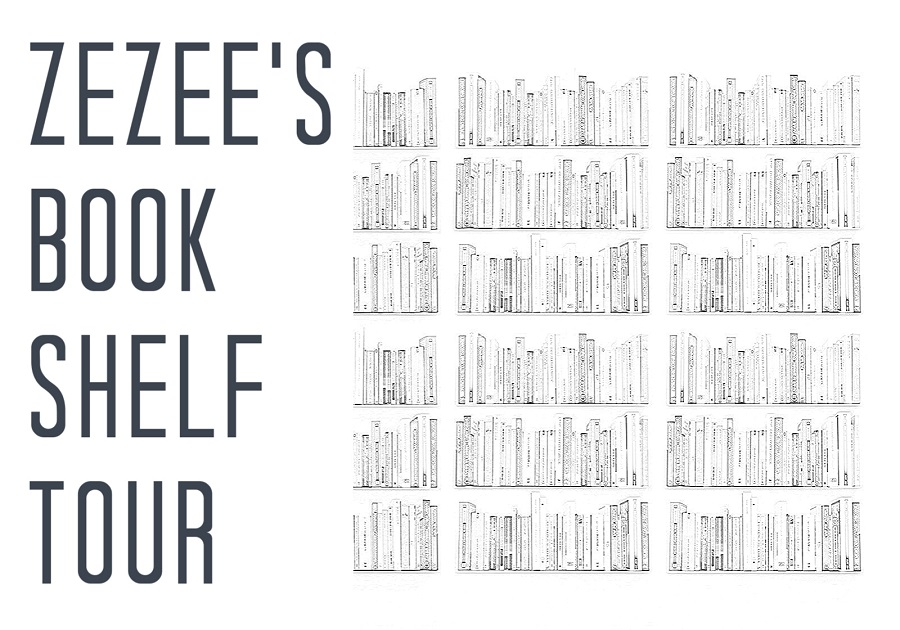 We’re finally here at one of my favorite shelves, the overstuffed fantasy shelf that barely has room for the two books I just ordered. Ah, well. This shelf has only fantasy books, many of which I’ve never read. I thought I’d be able to blaze through a bunch of unread books during this corona quarantine, but somehow that hasn’t happened. I wonder what I’ve been doing.

I believe this shelf might hold more books than the others because many are mass market paperbacks, so they take up less room causing me to stuff more books on these shelves. (I love mass market books for that.) I am beginning to wonder if the amount of books my book database tells me I have (over 1000) will match up to the number I’ll get at the end of this tour (stats below). Of course, that 1000 number includes e-books and audiobooks, but I still wonder because I’m almost done with this 3-books-deep bookcase (I’m being hopeful), and I haven’t even gotten to the 500 mark yet. Maybe I’ll get there at the end of this shelf. 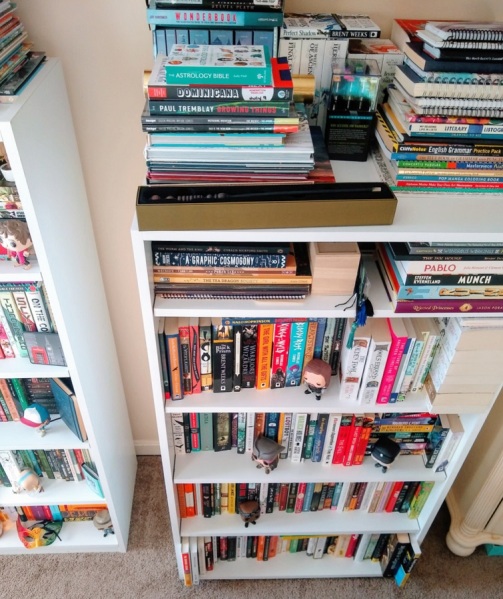 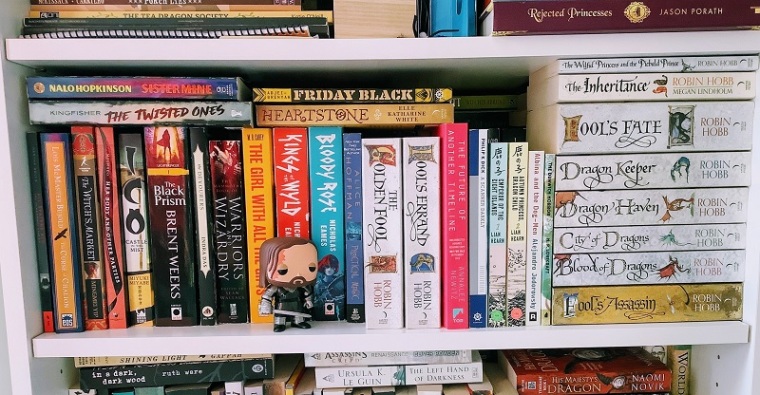 It has one of my favorite characters from George R.R. Martin’s Song of Ice & Fire series — Sandor Clegane, a.k.a. the Hound.

Sister Mine by Nalo Hopkinson

A horror novel inspired by Arthur Machen’s short story “The White People.” It’s set in rural North Carolina and is about a young woman who read her late step-grandfather’s journal while cleaning out her horrible late grandmother’s house and begins having weird experiences and seeing weird creatures. I liked the beginning and got annoyed with the protagonist as it went on. 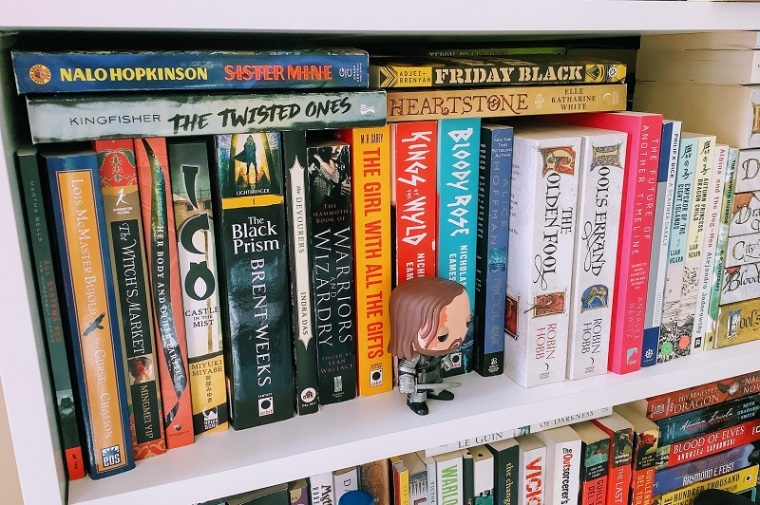 This was a fun read. It’s a sci-fi novella about an android sent to protect a group of scientists who are exploring a planet, but the android, which calls itself Murderbot, just wants to be left alone to watch shows all day. A quick, fun read. Highly recommend.

The Curse of Chalion by Lois McMaster Bujold ★★★★★

One of my favorite fantasy novels. It’s about a veteran soldier who wants to settle down to a peaceful life, but instead gets caught up in political intrigue and divine machinations. It’s such a good read. Highly recommend, of course.

The Witch’s Market by Mingmei Yip

Her Body and Other Parties by Carmen Maria Machado

Ico: Castle in the Mist by Miyuki Miyabe

The Black Prism by Brent Weeks

I actually don’t like this story, but I love the prose. That’s why I won’t unhaul it. It’s a fantasy novel set in India about a shapeshifter who asks a professor to write his biography. The story is great and leans toward literary fiction (actually, you’ll most likely find it in the literary/general fiction section), but it didn’t work for me.

The Mammoth Book of Warriors and Wizardry by Sean Wallace (ed.)

This is such a good read/listen. Although I own the book, I listened to the audiobook. It’s a horror novel about a girl who’s isolated along with other kids at a facility and interacts with adults only when bound to a chair. (I really don’t know how else to describe it without giving away too much.) The writing and storytelling are fantastic. I highly recommend it. And the narrator of the audiobook also does a great job.

Kings of the Wyld by Nicholas Eames ★★★★☆

A fantasy novel about a band of warriors who regroup to save one of the band members’ daughter. I feel so silly. I knew nothing about Dungeons & Dragons when I read this, so I didn’t get any of the references. Now that I started playing D&D (like last week), I see how much it’s influenced by D&D.

One of my favorite Hobb books. It’s the second novel in the Tawney Man trilogy, which is the third set of books in the larger Realm of the Elderlings series that I LOVE!!! (Btw, I tried to place all my Hobb books together because they are all part of the same series but, ugh!, shelf space.)

The first novel in the Tawney Man trilogy, which is the third set of books in the larger Realm of the Elderlings series. In it, Fitz and the Fool team up again to save the Farseer throne but also to save a species from extinction.

The Future of Another Timeline by Annalee Newitz

Emperor of the Eight Islands by Lian Hearn

Albina and the Dog-Men by Alejandro Jodorowsky, transl. by Alfred MacAdam

The Dunwich Horror by H.P. Lovecraft 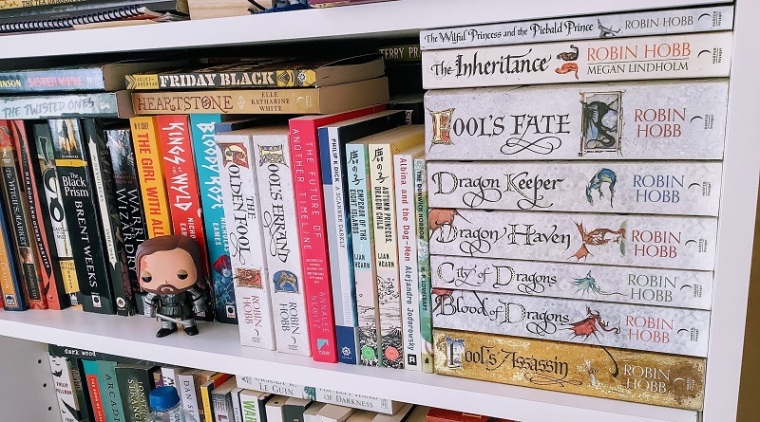 The Wilful Princess and the Piebald Prince by Robin Hobb ★★★★★

A prequel to the Realm of the Elderlings series. It’s so good! It’s about how the Wit, a magic system in the world, became taboo. I recommend reading this book after reading the Tawney Man books (I think the story will seem more significant if read after these books) or at least after reading the Farseer books.

The Inheritance by Robin Hobb ★★★☆☆

A book of short stories written under the Robin Hobb and Megan Lindholm pseudonyms (same author). I recently read it with my buddy-reader in everything Hobb — Emily at Embuhleeliest. I’ll post a review soon.

The third book in the Tawney Man trilogy, which is the third set of books in the larger Realm of the Elderlings series.

The first book in the Rain Wild Chronicles, which is the fourth set of books in the larger Realm of the Elderlings series. This story is largely set in the Rain Wilds, a jungle-like area in the Realm of the Elderlings world that have trees so large that extended human families reside in them and cities are built among them. An acidic river runs through the jungle that becomes toxic when it turns white.

The second book in the Rain Wild Chronicles, which is the fourth set of books in the larger Realm of the Elderlings series.

Another one of my favorite Hobb books. It’s the third book in the Rain Wild Chronicles, which is the fourth set of books in the larger Realm of the Elderlings series.

The last book in the Rain Wild Chronicles, which is the fourth set of books in the larger Realm of the Elderlings series.

The first book in the Fitz and the Fool trilogy, which, so far (and hopefully is not), is the last set of books in the larger Realm of the Elderlings series.