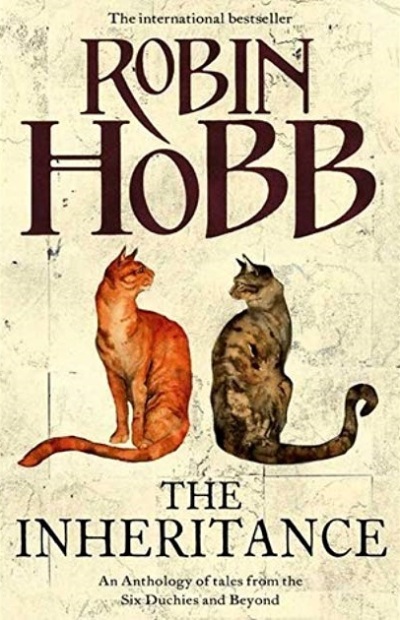 My buddy-reader in all things Hobb, Emily at Embuhleeliest, and I completed the last novel in Robin Hobb’s Realm of the Elderlings series last year and have been craving more of the story ever since. Will Hobb write more stories in this epic fantasy series that’s 17 books long (including a prequel)? I don’t know, but I think there’s potential for her to write more and if she does, Emily and I will read it.

Well, wanting more of Hobb’s stories no matter what they are about, Emily and I decided to read Hobb’s anthology of short stories, The Inheritance, which contains stories written under the pseudonyms Robin Hobb and Megan Lindholm.

We began with the Hobb stories, of course, since they are based in the Realm of the Elderlings settings (so that we completely wrap up that series) and then moved on to the Lindholm ones. They weren’t what I expected.

Notwithstanding its author credits, this short story collection was written by one person. “Robin Hobb” and “Megan Lindholm” are both pseudonyms used by California-born Margaret Ogden, who from 1983 to 1992, published exclusively as Lindholm. This generous, 400-page hardcover original brings together short stories and novellas penned under both authorial bylines. As Hobb herself notes, “their” writing and styles differ in significant ways. (P.S. This collection includes stories previously unpublished in the United States.)

Each story is preceded by an introduction in which Ogden discusses what inspired her to write the particular story or what she was hoping to attain by writing the story. I appreciated these reflections, and also the preface to the collection, because we get some insight into who Ogden is and who she is as a writer.

As for the stories, I liked the Hobb ones more than I did the Lindholm ones, which I think is expected since I am more familiar with Hobb’s descriptive style from having read all the Realm of the Elderlings books. Plus, I read the Inheritance shortly after completing the Realm of the Elderlings series, which wasn’t a good idea, I think. I was craving more story set in the Elderlings world with characters I’m familiar with, but only half of that wish was fulfilled. The stories were set in the Elderlings world, yes, but with new characters. So no, the Rosemary in “Cat’s Meat” is not the same Rosemary I was familiar with from the Farseer books. (I felt a little tricked about this and was upset with the book before getting over myself.) Emily and I read the Robin Hobb stories first.

“Homecoming” was my favorite because it’s about the people who settled in the Rain Wilds and built Trehaug. It’s about how these settlers made a home in such an unfamiliar landscape and how they managed the lure of the Elderlings ruins (spoiler — not well). It’s not surprising that this is my favorite. It doesn’t have familiar characters, but it’s an origin story for one of the most fascinating places in the Realm of the Elderlings world. I also liked it because the protagonist is an artist, so the story is also about an artist putting her talent to practical use. And, as with the Hobb stories set in the Rain Wilds or Bingtown, a woman is the hero in this story (well, in all the Hobb stories in this anthology, actually).

The other two Hobb stories were just as great.

“The Inheritance” is set in Bingtown and is about a girl inheriting her grandmother’s necklace that has a wizardwood pendant that informs the girl about what was stolen from her grandmother.

And “Cat’s Meat” is actually set in the Six Duchies and is about a single mother defending herself, child, and home, with the help of her cat, from her selfish baby daddy. Lol, well a whole lot more goes on in that story, as Hobb’s stories typically do. It made me wish cats had more page time in the Elderlings books. They are as intriguing as the dragons, sometimes more so.

The Lindholm stories were good but there’s an unsettling tone to them that made them unappealing to me. (Not sure if “unappealing” is the right word, but they are all unsettling in some way.) I think if I’d read these stories at a later time (after a long break from the Realm of the Elderlings books), I would have been more open and patient with them. But unfortunately, I was still mourning the end of the Elderlings books, so only two of the Lindholm stories stood out to me:

“A Touch of Lavender,” which seems to be set in an alternate future where aliens are living on earth separately from humans and humans can become addicted to touching the slime on the aliens’ bodies. The story is about a boy whose mother gets addicted. It’s so sad.

“Cut” is also set in an alternate future but is about a woman whose granddaughter wants to undergo female circumcision because it’s what’s currently trending. The story isn’t graphic, but it too disturbed me because of the granddaughter seeming to want the circumcision for superficial reasons… That’s what I got from it.

The collection was a decent read, but unfortunately the Lindholm stories were not as appealing as the Hobb ones. It could be because the Lindholm stories were written earlier so Ogden had developed much as a writer by the time she wrote the Hobb ones, or it could be that I was craving more Hobb and Realm of the Elderlings stories too much and didn’t have patience for anything else (so I was having a little reader tantrum). Who knows?

The Hobb stories, especially “Homecoming,” are worth checking out if you’ve read the Realm of the Elderling series or any of the subseries that are set in Bingtown or the Rain Wilds. And if you are a fan of Robin Hobb, I think it’s worth checking out the Lindholm stories to see how the style differs from the Hobb stories (Hobb’s are way more descriptive) and the writer Robin Hobb developed from.

6 thoughts on ““The Inheritance” by Robin Hobb & Megan Lindholm”