2020 wasn’t a great year, but there were some positive moments and my reading was one of them. Although I suffered from bouts of reading slumps, especially at the beginning of the year, I managed to read a lot more than I anticipated.

To go easy on myself, I set my Goodreads goal at a manageable 50 books, just as I did back in 2019. But because I was stuck at home like many others with little else to distract me, I managed to read more than I expected and ended the year having read a combination of 94 books, comics, mangas, and picture books. That’s 16 more things than I read last year. I was hoping to hit the 100 mark (which I hope for every year), but that didn’t work out. Maybe I’ll do so this year, 2021.

I began 2020 in a reading slump that didn’t get much better as the year wore on. Sometimes I’d escape the slumpiness only to plunge back into it weeks later either because I took on too many reading events and engagements or because what was going on in the world affected my mood and reading experiences. Still, I managed to read some good books and even binged on a genre I hardly ever read — romance. I also managed to partake in some great readalongs and buddy-reads too.

Of course, I didn’t attend many literary events last year due to the pandemic, but I managed to tune in to several online and even attended two in-person events to see Neal Schusterman and, later, Esmé Weijun Wang and Zack McDermott before the pandemic rolled in and shut everything down. It sucks that I couldn’t attend live events, but the positive here is that many online events took place instead and authors, and attendees, could simply attend events from the comfort of their homes. I try to see the upside to the disruptions in 2020.

Well, let’s focus on the positive that is my reading stats. I enjoy going over these to see how I read in the previous year. I think I did pretty good. I’m impressed by my 94 books read and would like to celebrate in some way.

Favorites of the Bunch

The Book With No Pictures
Ocean Meets Sky
Nimona
The Boys, Vol. 1: The Name of the Game
Hello Lighthouse

The Fight to Redefine Racism (newyorker.com)

This was published in 2019, but it’s still a timely read. It’s about racism in America but also digs into Ibram X. Kendi’s Stamped From the Beginning and How to Be an Antiracist and Robin DiAngelo’s White Fragility. I highly recommend the article if you are planning to read, or have read, these books.

If Your Book Presumes an Entirely White World, It’s Not Universal (lithub.com)

The writer talks about the presumption that White means universal.

“Literary novels about black people don’t have to serve as homework for well-meaning activists just as they don’t have to stand as political statements for the black community as a whole. Literary fiction featuring the life experiences of a black woman can be pitched, marketed and read as universal, because (news flash) everyone in the universe isn’t white.”

‘A Conflicted Cultural Force’: What It’s Like to Be Black in Publishing (nytimes.com)

“Publishers are now in the ironic position of making money off books by authors that they once held in disfavor.”

Smorgasbords Don’t Have Bottoms: Publishing in the 2010s (nplusonemag.com)

A long-form article about the evolution of book publishing in the 2010s: from the rise of Amazon e-books to the resurgence of indie bookstores; from conglomerate publishers to the abundance of Trump books and memoirs by YouTubers and other social media influencers; and also, the state of Barnes & Noble, Amazon, and book publishers now.

For Harriet (youtube.com): What Happens to Black Women and Girls in a World Without Police? with Dr. Brittney Cooper

In
The Book With No Pictures
Mexican Gothic

Most Popular | Least Popular
**according to Goodreads** 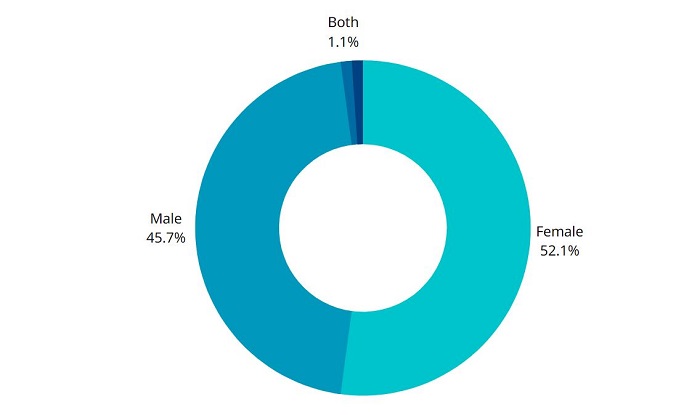 I’m so proud of myself that I managed to read 94 books in 2020. 94! I’ve never hit that high since starting this blog. I’ve always wanted to hit the 100 mark and was hoping to do so in 2020, but I also didn’t want to force myself to read that much either because that would take all the fun out of it. So I’m okay with my 94 books read but am hoping that I manage to read 100 this year.

What helped me have that many books completed was reading a bunch of comics and listening to a lot of audiobooks. I read the most in April, completing 22 books, many of which were single-issue comics because I’d rediscovered my Comixology account and binged on all the free comics they had available. The OWLs Magical Readathon also took place that month, so I read a lot for that. I read a lot in November, completing 16 books. I spent that month listening to a good bit of audiobooks and running through the entire Wicked + the Divine comic book series, which was fantastic. August comes in third with 12 books read. I think I hit such a high number then because I was participating in the NEWTs Magical Readathon.

It may seem like January, February, May, and October were my worst reading months — I completed 4 books in each of those months — but that’s average for me if all I’m reading is novels and audiobooks aren’t included. So 2020 was a great and very unusual reading year.

Seeing that I managed to read 94!! books, it’s no surprise that many of them were comics (meaning single-issue comics) and graphic trades (which includes comic book volumes, graphic novels, and mangas). I got through 51 novels thanks to audiobooks, which I use to reread books these days.

I confused myself when considering what should be listed as “short story” and messed up the numbers there, but I didn’t realize it until after I made all these pretty graphs and I damn sure wasn’t going to redo them, so I’m keeping the messed up numbers. It doesn’t change that I read 94!! things. But basically, I listed some books as “short story” when they were actually an anthology, so I should have either placed it in the novel category (because all the stories together amount to novel length) or have made anthology a category.

In case you were wondering (which you probably weren’t but future me certainly will be), I started 23 series, have 30 ongoing (based on books I read in 2020), and completed 7. But I don’t trust these numbers because I reread a lot of stuff in 2020 and know for sure that I only completed 1 series and started many, so I have a bunch ongoing.

The majority of things I read were of average to short lengths. But (because I’m in the midst of working my way through the Wheel of Time), I managed to complete one book that’s over 1,000 words (hint — it’s the longest book I read this year) and a few other long ones (which were probably all the Robin Hobb books I reread).

Okay. I’m done. If you read or skimmed all that, thank you! I appreciate you. You are wonderfully awesome! 😀

Reading plans for the new year

Spend less.
Read more of my own books.