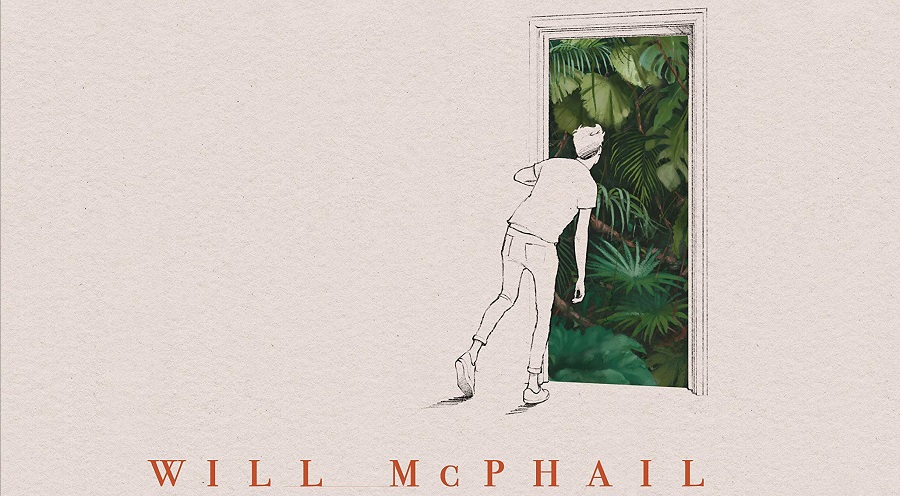 I received an e-ARC of this graphic novel through NetGalley. I’d never heard of the author/artist before doing so, but the description of the story interested me. As such, I wasn’t sure what to expect going in, and after the first couple pages, I thought I’d be bored and dislike the book. But, surprisingly, I liked it.

In by Will McPhail (illus.)

A poignant and witty graphic novel by a leading New Yorker cartoonist, following a millennial’s journey from performing his life to truly connecting with people.

Nick, a young illustrator, can’t shake the feeling that there is some hidden realm of human interaction beyond his reach. He haunts lookalike fussy, silly, coffee shops, listens to old Joni Mitchell albums too loudly, and stares at his navel in the hope that he will find it in there. But it isn’t until he learns to speak from the heart that he begins to find authentic human connections and is let in—to the worlds of the people he meets. Nick’s journey occurs alongside the beginnings of a relationship with Wren, a wry, spirited oncologist at a nearby hospital, whose work and life becomes painfully tangled with Nick’s.

Illustrated in both color and black-and-white in McPhail’s instantly recognizable style, In elevates the graphic novel genre; it captures his trademark humor and compassion with a semi-autobiographical tale that is equal parts hilarious and heart-wrenching—uncannily appropriate for our isolated times. (Goodreads)

In is a semi-autobiographical contemporary graphic novel about a young man called Nick trying to connect with the people he meets in his daily life. Nick is a millennial working as a cartoonist for a magazine (like the author). In his efforts to connect with others, he realizes that he also has to let down his walls to allow others to open up to him.

It’s what I’d describe as a quiet story, since there’s not a lot of action in it to shock and surprise the reader and speed the story along — not that it needs to be fast-paced since it is quite short. The story is introspective. As Nick tries to figure out how best to connect with the people he encounters, it makes the reader reflect on how they manage to do so in their lives, especially these days when we’re much more likely to stare at out phones drowning in neverending scrolls rather than speak to and connect with the people around us.

It’s also a heartwrenching story. Of the many people we see Nick interact with, we also see him with his mom. Every couple days, he spends time with his mom as she works on a fixer-upper. But later on in the story, we learn that she’s terminally ill and we see Nick and his sister trying to understand and cope with such news.

In isn’t a story I thought I would like when I started it because of its quietness and seeming blandness when I saw the cover and skipped through a few pages. But I started reading and it grew on me. Sure, I didn’t understand what was with the “children of the bowl” in the first couple pages, but seeing Nick really try to connect and understand others appealed to me and the dry humor throughout added some levity — I especially liked the names of the cafés.

The majority of the comic is pretty bland — grey, black, white. This continues for some time that I thought the entire comic would be this way, so I was surprised when Nick succeeds in connecting with the handyman who fixes his overflowing toilet and I turned the page to a breathtaking one of color that looks like a painting. I liked that surprise. After all that blandness, it seemed like a treat.

So despite the constant grey, black, white used for the majority of the story, there are scenes of color used when Nick succeeds in connecting with someone on a deeper level, which I really liked.

I also liked the illustration style. It’s not flashy, but it’s detailed when it needs to be. It’s actually quite simple and fits the tone of the story.

In was a good read and a quick one too. In some ways, I found it relatable because I think we all feel similar to Nick at some points in life where we just want to form a deeper connection with the people we interact with instead of making meaningless small talk.

I think it’s worth checking out.

(I read the ARC so I don’t have any sample illustrations to show. 😩 But the author is a cartoonist for the New Yorker, so if you’ve read that magazine, you’ve most likely have seen his work.)