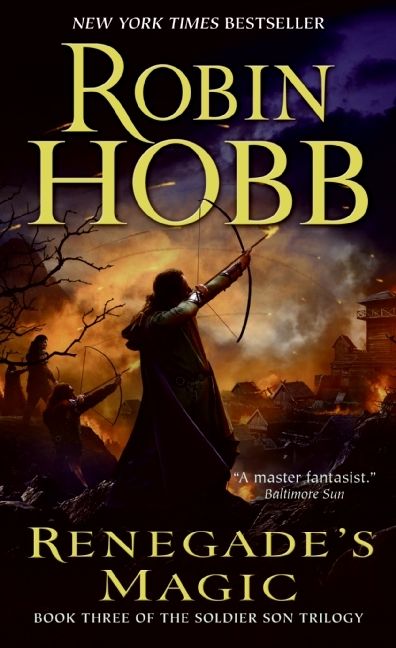 Oy vey. I read this with my buddy-reader in all things Hobb — Emily at Embuhleeliest — and thank god for these buddy-reads because I otherwise would not have made it through this story. I’m glad I had someone to talk to about it. Although we both gave this one a similar rating, Emily enjoyed it much more than I did. The entire series centers on the rift between the personalities, Nevare and Soldier Boy, and Nevare’s reluctance and stubbornness to do anything that might help the story to end quickly, so I was annoyed with his character 90% of the time I read this.

This picks up right after the events in Forest Mage. Nevare has FINALLY decided to give his life over to the magic, or so he says. He thinks he knows what the magic wants him to do and expels all the magic Soldier Boy has meticulously stored in his body to create a barricade of sorts to stop the king’s road from advancing toward the ancestor trees. This effort isn’t very effective and, even worse, is costly to Nev because by expelling that much magic, he greatly weakened his body.

Jodoli and his feeder and Olikea and her son, Likari, are called on to aid Nev, whose weakened state has allowed Soldier Boy to become the dominant personality in Nev’s body. The majority of the rest of the story is told from Nev’s perspective while he’s trapped in his body still trying to find a way to avoid the magic and thwart Soldier Boy’s efforts at hurting the Gernians.

We get to visit Speck villages and gatherings and learn more of their custom and history and magic and how greatly the Great Ones are revered in their society. Throughout it all, Nev and Soldier Boy are often pestered by Orandula, the god of balances, and for 98% of the book, both personalities are at a lost regarding what the magic wants Nev to do. Soldier Boy guesses what the magic wants him to do and tries for an attack by attempting to set fire to Gettys, but his efforts are like Nev’s at the beginning of the book — a waste of energy with little gained and much lost.

After much worrying, nagging, arguing, bartering, fights, flights, spiritual visits to Epiny and Spink and Amzil and Tree Woman, a.k.a., Lisana, Soldier Boy FINALLY gives in to the magic, figures out what needs to be done, and sets things on track to stop the road and heal the two nations. And guess what? It all came down to the journal Nev had been keeping all along. Imagine, this long, tiresome story could have been shorter. Anyway, Soldier Boy dies, Nev somehow is alive, and his life seems like it will continue to get better with much healing and reuniting with his family. (Goodreads)

Can you tell that I didn’t like this story much? It all started out so promising. The first book, Shaman’s Crossing, is one of my favorite novels, but by this novel, the third and last one, I was so frustrated with the protagonist that it was a slog of a read sometimes. Oh my gosh! The indecisions and arguments and resistance between Nevare and Soldier Boy went on and on and on that it sometimes seems as if no progress was made in their development. (It seemed that way due to my frustration with the characters, but both develop a lot throughout the story.)

We begin the story with Nev stating that he’s willing to give in to the magic only for him to keep resisting it later on, like a chapter or two later. It was so frustrating! I was so tired of it and ready for him to move past that and it didn’t happen until about a handful of chapters from the end. It was SO frustrating! Emily and I had to plod through a good 98% of the book only for Nev and Soldier Son to figure it out and the magic to quickly solve and wrap up things in about two chapters or something. Ugh! 😩

Looking back, I really don’t care for the majority of this book. I do prefer when Soldier Boy became the dominate personality because he seems more active in contrast to Nev’s passivity, but since it’s Nev who is telling the story, it wasn’t much of a relief. The parts of this book that I liked was the end when Nev/Soldier Boy began to dance and let the magic take over and we see how all the seemingly disparate pieces of Nev’s life fall into place to make the magic take over and heal the rift between the two nations. If I was Nev, I’d be pissed because seriously, why didn’t someone tell him to do this in the first place?! So it’s obvious no one never knows what the magic wants, so why were the Specks so damn hard on him and Soldier Boy?!

Anyway, I love how the story wraps up after that with Epiny and Spink and breaking Amzil out of prison and running away and Tiber tracking them down and all the stuff with Orandula (who is WAY more interesting than the “magic”) and reconnecting with Nev’s family and ending on such a positive note that I want to know what happens next and would have preferred a story that was 98% about what happens next rather than 98% of Nev and Soldier Boy scratching their head about what the magic wants and coming up with sucky plans.

*Sigh* 😒 I’ve now read all of Hobb’s books. She’s one of my favorite authors and although I didn’t like this book and now don’t care much for the series past the first book and have now written a ranty review of the last book, she’s still my favorite. The book is well written with complex characters and incredible worldbuilding. It’s just that the protagonist was extremely frustrating to me and since the story is told in first-person, we are stuck in his head the ENTIRE time.

But, despite all this, I look forward to reading whatever book Hobb drops next, even if it’s another one in this series.

It is a good read. A frustrating one, yes, but a good read nevertheless.