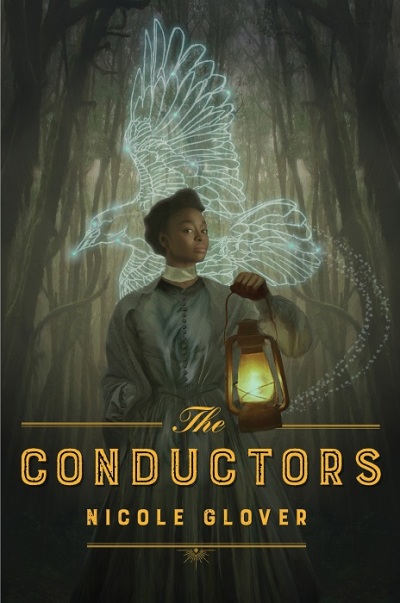 I was eager to read this when I first heard of it, so I requested a copy through NetGalley. Much thanks to the publisher (John Joseph Adams/Mariner Books) for granting me access to the e-ARC.

Although I received a copy of this book from NetGalley, it does not influence the thoughts and opinions I share about my reading experience below.

I was eager to read this because whenever I heard of it, I thought of it as historical fantasy about the Underground Railroad. But although it touches on slavery and the experiences characters endured to escape slavery and help others do so, the majority of the story takes place post-Civil War, shortly after slavery was abolished in the U.S.

The story is told from Hetty’s perspective. She met Benjy while working as a conductor on the Underground Railroad, helping folks escape slavery as she searches for her sister, who Hetty left behind when she escaped. During their exploits down South to free slaves, Hetty relied on her Celestial magic to help her and Benjy out of tight spots. And, now as investigators, her magic still comes in handy.

The majority of the story is about Hetty and Benjy trying to solve the murder of one of their friends while coming to terms with how their feelings for each other have changed over the years and affected their marriage of convenience. (Goodreads)

“We don’t belong nowhere. Our past is stolen, our present is lost, and our future hangs in the balance.”

What attracted me to this story is that it’s fantasy set shortly after slavery is abolished in the U.S. and focuses solely on Black characters. I’ve only read one other fantasy story that shares such similarities — Dread Nation by Justina Ireland, which is YA horror historical fiction that has zombies in it (and is a really good read). The time period, genre, and focus on Black people are all major positive points for me, and as I read, other things appealed to me as well, like the magic systems. Three magic systems are mentioned:

I also liked the flashbacks we get. The main story is set after the Civil War and focuses on Hetty and Benjy solving a murder, but the flashbacks are about their adventures as conductors on the Underground Railroad — the close encounters they had, how they used magic to escape capture — and shows how they met their friends. I thought it was skillful way to give a bit of backstory on the couple’s friends, who all become suspects in the murder case at some point.

Another huge positive for me were the issues explored, mainly the different ways Hetty’s friends directed their lives after escaping slavery. Some chose to build a new life without hanging on to the past, while others use their past as a motivation for what they work toward in the future. It also touches on Black people with light skin passing as White, and even marital partners from slavery days popping up, much to the surprise of their significant other, who had married someone else.

But, despite these positives, I didn’t enjoy the story as much as I thought I would. The characters could have used more development. Despite the backstories we get, the characters all seem one-dimensional, even Hetty, the protagonist, who I didn’t like. I think she jumps to conclusions about people too quickly yet totally ignores/misses obvious, suspicious clues about them when conducting her investigations. It was frustrating. Also, we are told rather than shown that she is close to her friends, so sometimes I didn’t believe the sincerity of her interactions with them.

The worldbuilding was also lacking. It was as if I got a sketch of the settings, and the magic system could have used more explaining as well. I have no idea what the limitations are for them, or which celestial sigils cause what action or why is it that Black people can naturally do Celestial magic. Is it that most people are born with magical aptitude but can be trained to do either Celestial or Sorcery magic, or is it that you’re born with Celestial magic but can be trained in Sorcery? This was a big turnoff for me because I love a well-developed world with a magic system that’s explained to me, or that the author somehow tricks me into believing I understand after giving a brief explanation and distracting me with something else (lol).

The plot also threw me off, mostly at the points where it focuses more on Hetty and Benjy’s romance. It seemed random to me since for a good chunk of the story, romance between the two or how they relate to each other as husband and wife is hardly mentioned, so when the story switched its focus to that, it seemed like a hiccup in its flow. And I think the mystery was dragged out too much. I got the impression that the story tried too many things at once or didn’t fully commit to the things it attempted: the feel of the historical period, the magic systems used, the mystery that carries the plot, and the random focus on romance.

The Conductors has a lot of potential as a historical fantasy novel set shortly after the Civil War that focuses on Black characters, many of whom are runaway slaves, but it fell flat for me. The characters and worldbuilding could use more development, and the mystery was dragged out too much.

I considered DNF’ing it, but I really liked the flashbacks and kept hoping it would get better as the story progressed. The pace picked up a bit toward the end.

13 thoughts on ““The Conductors” by Nicole Glover”