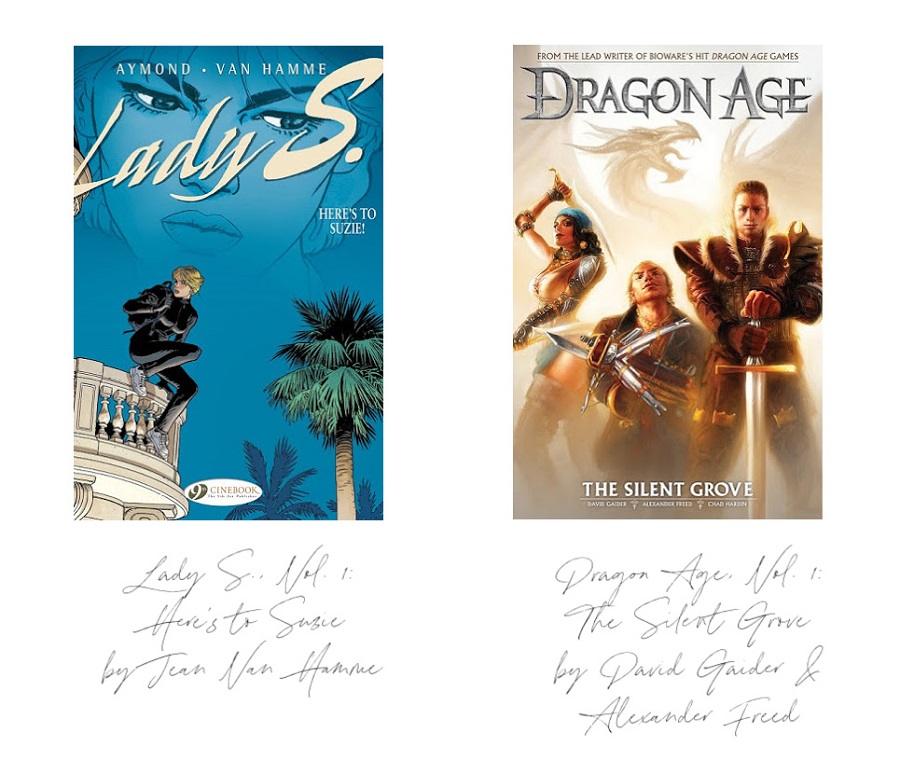 I’ll be a very happy reader if I manage to read at least two comics or graphic novels each month. Having read two in January makes me hopeful for how the rest of the year might go. I picked up the first volumes of Lady S. and Dragon Age, both of which I read electronically.

Although I love reading physical copies of comics, I’m getting used to the electronic versions. I just love how the lighting on my iPad causes the colors of the illustrations to pop. I also like the guided reading option available in the Comixology app, which enables you to read from panel to panel by zooming in on them. When I do that, I notice details I would have otherwise missed when reading from the full-page view. It’s highly possible that I might read more comics electronically, but I’ll continue collecting physical copies.

Adopted daughter and principal collaborator of roving ambassador James Fitzroy, special correspondent for the American Secretary of State in Europe, Susan is a clever, multilingual young woman, in full bloom and perfectly happy in the eyes of an attentive father. But this too-perfect happiness hides many faults, sorrows and mysteries. Trapped by her past, Susan will have to play her most dangerous role in a life already rich with adventure: Lady S., high-class spy in a diplomatic environment. (Goodreads)

I enjoy movies, TV shows, and comics about female spies and assassins, so I decided to check out the first volume of Lady S when I saw it on Comixology. It’s a Belgian comic book series about a young woman who was orphaned in the U.S.S.R. and became a successful thief before leaving the country when her past caught up with her. When the story begins, she is much older and is known as the adopted daughter of an American ambassador, who relies on her for her multilingual ability. The story opens in France and once again Suzie’s past has caught up with her. This time, she is blackmailed into becoming a spy.

This comic wasn’t at all what I thought it would be. It’s the cover that got me and made me expect much more action than what I received. But despite that, I enjoyed it. It is dialogue-heavy, but it’s all essential to the plot, and you’ll want to pay attention to it all because there are a few twists, which helped to increase my enjoyment of the story especially since it is quite slow-paced for a comic and mostly focuses on politics.

We get a lot of Suzie’s backstory in this volume, which I didn’t expect. I’m not well-versed in comics, but, so far, I usually get the protagonist’s backstory in the second volume; or, if it’s touched on in the first volume, the backstory doesn’t go as in-depth as it did here. But I didn’t mind that. I appreciated it, actually, because it helps to round out Suzie’s character and give more substance to some of the side characters as well.

I’m surprised at how much I liked the story, especially how it wraps up at the end. It makes me want to read the next volume.

Aymond’s illustration style worked for me. It’s very detailed when it needs to be and complements the story well. I liked the little mole high on Suzie’s cheek as an extra way to identify her in scenes, and I also liked that she’s often presented in warm colors. However, I tended to favor the city street views and spent more time admiring those.

Although it is a dialogue-heavy mystery with not as much action as I expected, it is a good read and a compelling one. I’ll most likely read the next volume. 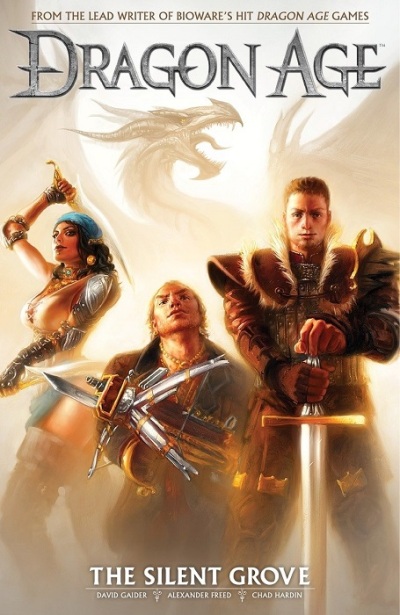 Dragon Age: The Silent Grove is the perfect introduction to BioWare’s dark fantasy universe! In this essential, canonical story from David Gaider, lead writer of the games, King Alistair, accompanied only by rogues Isabela and Varric, embarks on a quest deep inside the borders of Antiva—a nation of assassins! Together, they will encounter a prison break, dragons, the mysterious Witch of the Wilds, and one of the greatest secrets in the history of the world! (Goodreads)

I went into this not knowing a thing about the Dragon Age games. It wasn’t until I posted about it on IG that a friend told me that this is a continuation of the game — no wonder I was a little confused as I read. I got the comic book because I liked the characters’ poses on the cover. I didn’t read what it’s about or checked any reviews of it.

I’m still a little confused on the story, but what I gather is that a king is on a quest to find his father with only a pirate named Isabela (she seems to be a pirate) and a shady dwarf named Varric as his companions. When the story begins, the trio are visiting Antiva, which is a city filled with assassins. I was immediately intrigued.

But despite my strong interest, I didn’t absorb much about the plot, which is why I finished it feeling confused. Instead, my attention was on the interesting bits that happened — all the action, breaking into the archives of the assassin city, breaking in and busting out of a heavily guarded prison, and visiting the swamps where the mysterious Witch of the Wilds resides and encountering a dragon there. It was all very exciting and fun to look at. I was totally distracted from paying attention to the story itself.

However, what I did pick up on was a hint of camaraderie between the trio. I liked how Isabel and Varric sometimes poke fun at the king dude… Alistair. I did pause for a moment to wonder how a king managed to go off adventuring. Who’s managing the throne? Maybe it was mentioned in the story but I was too busy focusing on the action to absorb that info.

There were other hints of humor throughout. Another one that stood out to me was when Varric identified all the hidden traps in the archives. I really liked that part.

I like it. There is a lot of action, but the illustrations aren’t gory. Some panels that stood out to me are when Claudio and his men showed up to catch the trio breaking in to the archives. I love the colors and the shooting lines surrounding Claudio and his men and their poses helped to make them seem magnificent, superior, and powerful.

Another favorite panel is when the trio breaks into the prison and Varric shoots a guard through the forehead with his crossbow. The arrow goes through his head, ripping off his mask, and his silhouette reflects that. With another artist, that would have been a very gory scene, I think. I don’t mind the art being gory, but sometimes it’s nice to see it dialed back.

I had fun with this, even though I finished it feeling confused. I wouldn’t mind reading the next volume.