Second week of reading Kushiel’s Chosen by Jacqueline Carey and things are getting more and more interesting… of course!

I’m reading Kushiel’s Chosen as part of a readalong hosted by Imyril of the Wyrd & Wonder crew. Each week, someone new pops in to host a discussion on the chapters read. This week’s discussion questions comes from the host, Imyril, who blogs over at There’s Always Room for One More.

Btw, if you’d like to join in the readalong, you can check out the link above or visit the Goodreads group for the reading schedule or to share your thoughts on the book.

Marmion Shahrizai has a sudden fall from grace this week. What’s your take on how he handled Persia’s treason — and on how Ysandre handles him? Do you feel sorry for him? Do you think we’ll see him again?

Poor Mamion. I actually believe he was trying to do the right thing, but it became a big mess that blew up in his face and had him hopping around on cinders ever since. In a way, he probably feels relief that it’s all known now, but I feel sorry for him because so many people want him dead and his whole family turned their back on him. Those Shahrizais are cold. But daayyuumm!! They roll deep. Don’t mess with them Shahrizais.

I don’t trust Nicola, so I wonder what her motive is in telling Marmion to head to Aragonia for protection. I don’t believe anything she said to Phedre. I bet it was Barquiel L’Envers who told her to do that. I can see him placing Marmion in his back pocket in case he’s needed later… maybe to be the scapegoat for something, who knows.

I think Ysandre was right in uploading the law. I think if she deviates from it once, it will become too easy to keep doing so. But, although I don’t really care for Marmion, I do hope we see him again to help take down Melisande.

What do you make of Nicola L’Envers y Aragon? Do you trust her? Do you think she’s right in her assessment of Barquiel L’Envers?

Hell no, I don’t trust her. And I don’t think Phedre should either. Actually, I think Phedre will end up using that family password Nicola told her “burning rivers” or something like that and it will go wrong for her because it will actually be a trap. Nicola is obviously working for Barquiel L’Envers — Sir Foxiness, — and I think it was his sly plan to have her reveal what she’s doing to Phedre so that Phedre would be less suspicious of her. People suspect you less if you keep telling the truth, or believe you’re telling the truth.

I forgot what her assessment of L’Envers was… (too much going on in life this week) but if it’s that he’s trustworthy and he and Phedre are after the same goal — protecting Ysandre — then I say she is lying through her teeth! Or don’t realize how wrong she is. Uncle Foxy wants power. He’s playing everyone.

Phèdre returns to the Night Court as a patron, seeking help to understand her dreams. How have your impressions of the Night Court evolved since we first met Phèdre in Cereus House?

My impression of it has developed quite a bit. I think Phedre’s experience at the Gentian house was a surprise for me. I really thought that some houses did not require copulation and when I learned what the Gentian house stood for, I though copulation wouldn’t be needed since all the dude was gonna do is sort out her dreams, so how is sex needed in that situation?

Anyway, yes, my impression has evolved to the realization that copulation is required in all houses in the Night Court (which I should have known or assumed based on all I’ve read, but there are several ways to give pleasure, and I thought that’s why the houses focus on different things).

Much has been made of Joscelin standing at a crossroads. Did any of his choices this week surprise you? Any thoughts on what roads he may walk down — and where they may lead him?

Well… I’m really frustrated with Josce right now, so I’ve been hard on him the entire time I read. I actually don’t think he’s made a choice yet. He does what he must, protect and serve Phedre, so he goes off with her. But it doesn’t feel to me that he’s made a decision since he’s still so hung up on the other things. I don’t even know why he’s so obsessed with those other stuff. Ugh! He annoys me. I’m gonna stop thinking about him right here.

On the road again… Phèdre discovers she has friends in unexpected places and allies in every port. What was your gut reaction to the confrontation with the Unforgiven? Any predictions for what may await in La Serenissima?

Oh my gosh! I love that scene where Kushiel seems to speak through her to stop everyone fighting. It was impressive, and I’ve been waiting for a moment like that since the first book — something a bit more obvious showing that the god is working through Phedre. But part of me also wondered if Phedre was just being dramatic here.

It’s weird: I never thought this of Phedre in the first book, but I think it often now. I think the reason why is that I’m beginning to doubt her a little since everything is from her perspective in the present and she brags so much about how impressive the D’Angelines are. I guess the reason why I didn’t doubt her in the first book is because she was reflecting on what happened in the past, so she knew what would come and often warned us of bad situations by saying something like “if I only knew then what I knew now” — something like that but less cliched and more dramatic. Since we are in the present now, there’s no telling if she’s making mistakes or not.

Anyway, I liked the she now has a surprise army at her back.

I have no predictions for La Serenissima. I’m just curious to see that city. I actually want to read more about those sneaky Cassilines who helped Melisande escape! I suspect them too. I suspect uncle foxy of teaming up with the Cassilines to help Meli. I haven’t figured out the motive yet (other than power), but I’m getting there. 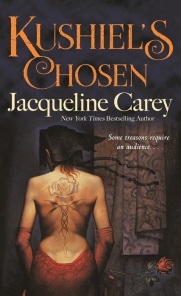 WHAT ARE YOU READING THIS WEEKEND?