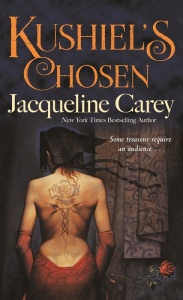 I’m late with it, but here’s my response to week 4’s discussion of Kushiel’s Chosen readalong. The world expands even more in this week’s chapters. We visit a new land and encounter new gods.

I’m reading Kushiel’s Chosen as part of a readalong hosted by Imyril of the Wyrd & Wonder crew. Each week, someone new pops in to host a discussion on the chapters read. This week’s discussion questions come from the Mayri, the Bookforager.

Btw, if you’d like to join in the readalong, you can check out the link above or visit the Goodreads group for the reading schedule or to share your thoughts on the book.

What are your thoughts/feelings on Phèdre’s escape from La Dolorosa? Specifically, how do you feel about her rejection of Melisande’s offer, Tito and Joscelin’s roles in her escape, and the vow she made to Asherat? (Along with anything else you want to add.)

Well, I was wondering how the plot would progress from her imprisonment. I expected her to take Melisande’s offer — and I think that’s the decision she came to before the guard dude came to her cell, allowing Phedre to free herself and the other prisoners. I wonder how the plot would have progressed if instead she had fallen in with Melisande, but, obviously, the gods had other plans. That’s how I think of it that Joscelin was able to break into (or is it on to?) La Dolorosa and cause a diversion that enabled Phedre to free herself. Now I think really bad things will happen if Phedre ever falls into Melisande’s clutches.

I was surprised that Josc was able to locate where Phedre was imprisoned, but I wasn’t surprised that he was able to sneak on to La Dolorosa. Josc is a bad-ass. He can do anything. Since Tito first appeared in the story, I wondered how he would help Phedre because of her regretful (sounds regretful to me) tone when she speaks of him. I was sorry that he was cut down, but from how the fight was going, I doubted Phedre and Josc would have been able to make it off the island together.

Regarding her vow to Asherat, I guess Phedre is the instrument for all the gods in this world. They will all take a turn tuning her to their needs.

(And would you rather Phèdre had accepted Melisande’s offer of a more *ahem* personal imprisonment?)

Lol! I prefer the turn the plot took. Frankly, I’m tired of reading about her strong attraction to Melisande because it’s starting to seem unnatural. I assume that Phedre being Kushiel’s dart and Melisande being of Kushiel’s line is the reason for it. Maybe it’s the cause for them being drawn to each other like magnets, but I’d like an explanation for it. I assume if she was with Melisande, the story would focus too much on Phedre trying to avoid and ignore the attraction. I much prefer her being washed out to sea, rescued by a pirate, and being frightened by a shadow dragon.

Pirates! A dragon! A secret island! Woo! What do you make of pirate captain Kazan Atrabiades? And how do you feel about his ‘relationship’ with Phèdre?

Ha! My initial thought was “Ugh! Another Selig situation.” I thought it would be similar to the Skaldi adventures in the first book, so I wasn’t too eager to read about Kazan at first. But the more I read, the more I became intrigued, especially by his blood curse. Phedre was obviously drawn to him. I wonder if it’s the blood curse calling to Kushiel’s dart, which can be construed as a blood curse, or if it’s another god seeking Phedre’s help.

Kazan’s backstory is sad, and I wonder if his mom is still alive in the capital city (of course, I forgot the name). He’s a pirate, but I like what he’s trying to do for his people. Regarding his ‘relationship’ with Phedre, again I was expecting it to be similar to her Skaldi adventures. I’m glad it wasn’t. However, the discussion leading to it is one I’ll need to reread because I think Phedre considered it as she being forced, but as I read, I thought of it as similar to Naamah’s service except that the payment she receives is him sending for her ransom so that she can be free…? I guess she is being forced since she is a prisoner. Did Kazan say that was the only way she would be free? I was very confused about all that. Anyway, I was surprised that she sometimes forgot herself with him, and he with her, when they were together. Again I wonder if it was the blood curses making them relate so to each other.

Yet more of the map has been filled in this week. Do you have any thoughts to share about what Phèdre and we have learnt of Illyria and its relationship with Terre d’Ange and La Serenissima?

Well, my initial thought was that I guess Phedre is going to end up travelling to all the countries on this map at some point because of Melisande. I liked the change that we visit a land where Phedre is unfamiliar with the language because that gave her no advantage in the situation, so I liked seeing how she dealt with the situation and got her bearings. She is very strong-willed, Phedre. Gotta admire her.

The more we learn of other lands, the more enemies Terre d’Ange seems to have either out of jealousy or because the D’Angelines turned their backs on them. Learning about Illyria makes me dislike Serenissima for what they are doing to the country’s trade and its people.

I LOVE it!!! I love reading fantasy stories where gods and religion come in to play AND are essential to the plot. I love the variety in this world, and I love the hints that the gods are real and are probably affecting the world through Phedre and possibly others.

WHAT are YOU READing THIS WEEKEND?