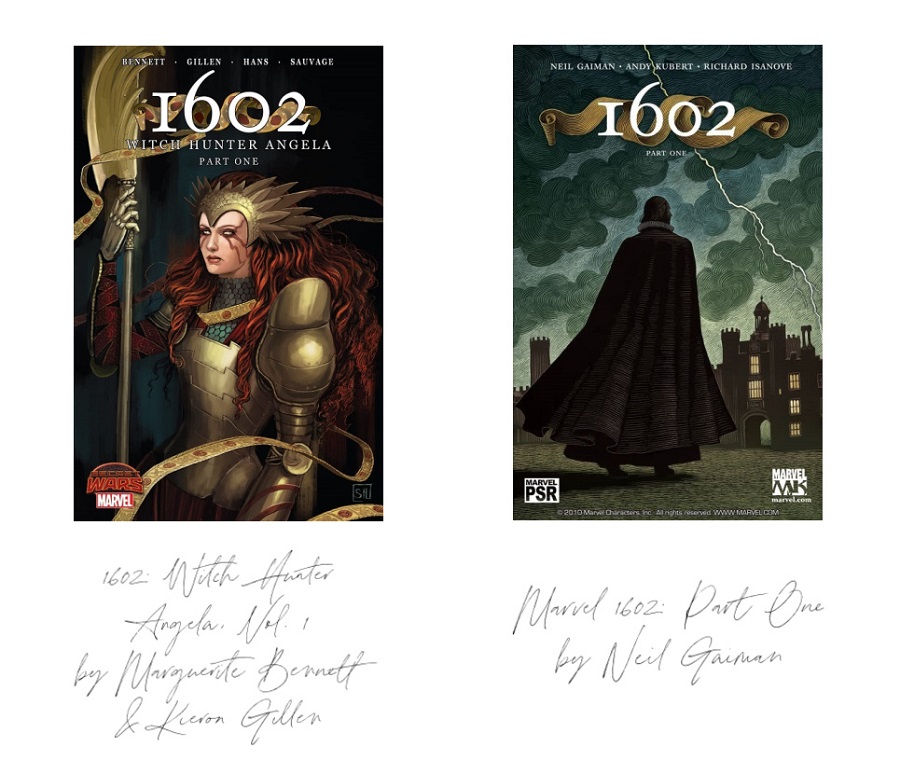 I know nothing about the superhero stories, so I didn’t realize Angela was from the Marvel superhero universe when I got this. I picked up 1602: Witch Hunter Angela purely because of the cover, and the title — I like stories about witches. It wasn’t until I started reading the bonus story — Marvel 1602, #1 by Neil Gaiman — included in this volume that I realize it’s about superheroes but set back in the early 1600s.

In the altered realms of Battleworld, Angela and Sera are Witch Hunters, the scourges of King James’ England, 1602. In a land beset by magic and monstrosity, they seek a new and seductive evil-not witchbreed, but deal-making Faustians, who bargain with ancient creatures for unnatural power! Moral ambiguity? Fancy allusions? Marguerite making the most of that English degree?

I had to read this one twice, which I usually do with comics to refresh my memory before reviewing them but with this one, I had to do a double read because I didn’t get the story my first time through. The plot was too episodic, and I couldn’t tell how Angela and her companion, Serah, were able to quickly identify the Faustians. And although I liked some of the mini-stories interjected throughout, they didn’t help to ease my confusion about the main plot.

1602: Witch Hunter Angela, which contains issues 1-4, focuses on Angela (who’s part of the Marvel universe and connected to Asgard in the present day, I think) who typically hunts witchbreeds (a.k.a. mutants) with her companion Serah but is now hunting Faustians, beings who made deals with the Enchantress, a faery queen, to get their power. Angela and Serah are able to track down the Enchantress but get caught up in her web when she curses Serah to die after Angela has killed three of the Enchantress’s Faustians. This places Angela in a quagmire because she doesn’t want to lose her companion and lover (I guess…? It’s hinted at), but that doesn’t slow down the duo in hunting Faustians.

As I mentioned above, I had some difficulty following the plot my first time through. However, I was about to keep up on my second read but would still get a little confused. I blame that on the episodic nature of the plot. However, aspects of the story appealed to me. I like that it’s heavily fantasy-based with a touch of horror because the parts including the Faustians and the faery queen are a little chilling. I liked the banter between Serah and the patrons at the tavern early in the story; I like that the theme of “stories being magic, or working magic through stories” is touched on; and I like that Angela and Serah sometimes “break the fourth wall” by talking aside from the plot. The mini stories are by Kieron Gillen and for the most part I liked them, but I also found them distracting sometimes.

The story was okay and entertaining, but I was too confused to enjoy it as much as I would have liked. I think those more familiar with the characters and/or the Marvel universe will enjoy it a bit more than I did.

I was first introduced to Hans’s art style when she contributed to the Wicked + the Divine series. It took a while for me to get used to it there, but that prior introduction helped me to quickly ease into it here.

I think I ended up appreciating her work a lot more in 1602: Witch Hunter Angela because it fits the tone of the story well. This volume contains a bonus story rather than a discussion between the writer and the illustrator about their process, so I have no idea how Hans went about illustrating this story. But her images remind me of oil paintings, and I love that. The cover pages for each issue are stunning and remind me of classic paintings I do not know the titles of. This one is my favorite, which I think is inspired by Giovanni Baglione’s “Sacred and Profane Love” (which I did some digging to find because I could NOT remember the name of the painter or the painting, ugh!):

I also love that her illustrations emphasize the dark, atmospheric vibe of the story. Some of my favorite aspects of her artwork are the smirks of some of characters, which make them seem sinister in certain scenes. I also love the haunting look of the Realm of Faerie, which Angela visits in the fourth issue. The place Angela visits looks like a cathedral made from trees.

(I’d love to check out another fantasy comic Hans illustrates, or a horror one.)

Other artists contribute by illustrating the mini stories. Some I liked, some I didn’t; but they seem to fit the tone of the stories they are paired with.

It was okay, but I liked the illustrations a lot more than I did the story, which often confused me.

I bought my copy a couple years ago and will hold onto it because I like the art. (I’d love to get a poster of the issue #3 cover.)

Marvel 1602: Part One by Neil Gaiman, illus. by Andy Kubert with digital painting by Richard Isanove

Award-winning writer Neil Gaiman teams with artist Andy Kubert to re-imagine the Marvel Universe in the year 1602! It’s Spider-Man, the X-Men, Nick Fury, Doctor Strange, Daredevil and more as you’d never think to imagine them in an utterly unique and thrilling tale of high adventure! (marvel.com)

Okay, so don’t take my rating of this too seriously because this is only the first issue of the volume and I don’t know anything about superheroes. I just love watching the Avengers shows.

This one contains several characters from the Marvel universe, such as Doctor Strange, Nick Fury, and Daredevil, except it’s set in 1602 when Queen Elizabeth is nearing the end of her days. Being the first issue, this is all setup for what’s to come later.

I only read through it once, so much of the little plot there is has faded from memory, but what I do recall is that I was mildly intrigued and a lot confused, lol. I was able to pick up on who certain characters are from the bit of the Marvel universe I know, but this issue is just introducing us to stuff, so I had no idea what it was all leading to (that’s why I prefer to read full volumes).

The illustrations are very realistic and detailed, which appealed to me. Although the colors lean toward darker tones, they also seem rich, which made them stand out.

It’s a decent setup. Although it mildly interested me when I read it, I’m now a bit more curious and might check out the full volume.

I LOVE the illustration style of the cover. If I decide to read more of the story, the cover will be a HUGE reason why I buy a copy… if I end up doing so.

Most likely I’ll borrow it from the library, if it’s there, or try to see if the digital copy is discounted on Comixology.