Six for Sunday is a bookish meme created and hosted by Steph at A Little But a Lot.

(I totally forgot about this meme. Life is still busy, so I’m barely keeping up on here.)

Not many adults read picture books to enjoy it themselves. People most often believe that picture books are intended only for children, but I think adults can also find enjoyment and sometimes even solace in them. Plus, the story is often accompanied by gorgeous illustrations that make it worth picking up the book to admire them.

Here are some of my favorite picture books. Of course, I couldn’t choose just 6, so I went with 8 instead. I’ll also link to my review of each, in case you’d like to see more of the art.

The Arrival by Shaun Tan

Some folks consider this a picture book and others call it a graphic novel. I tend to lean toward the latter, but either way, it’s a great one to pick up and one that all ages can enjoy. It’s a silent story told without words about a man seeking a safe place for his family to live after a monster invades his homeland. The illustrations are stunning and often make me think of old photographs.

The River by Alessandro Sanna (illus.), transl. by Michael Reynolds

I enjoyed the River for its breathtaking watercolor paintings. The book focuses on a riverside town and shows us what transpires there as the seasons change from the dark, sullen wintry months to the bright, festive summer ones. The reader relies on the illustrations for much of the book as there are hardly any words. There also isn’t much plot as the focus is just on the town, the changing seasons, and most importantly (at least to me) the beautiful paintings. 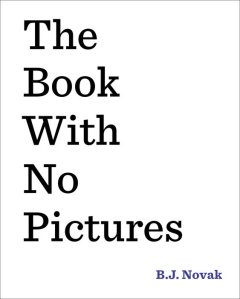 This is a picture book that… doesn’t have any pictures, and it’s about that — the fact that it doesn’t have any pictures and how it both calls attention to that fact and distracts you from it in various silly ways. It’s just a fun read for when you want a laugh, and I sure enjoyed it. Although it doesn’t have great paintings and illustrations for me to admire, I love the presentation anyway. Its simpleness makes it stand out on the kids’ picture bookshelf in a store.

I think I’ve mentioned this quite a few times on here, but it’s a good read. The story is inspired by Charles Perrault’s fairtale Little Red Riding Hood, except it’s about a little wolf travelling through the woods to his grandmother’s house since she has lost all her teeth and can no longer hunt. There’s also an interesting twist to the story, which I thought was great. I also loved the illustrations, which have a dreaminess to them that emphasizes the story’s whimsical tone in some parts. It was a fun read too.

The Fan Brothers are known for the stunning picture books they create. Ocean Meets Sky is a touching story that I read at a time when I was going through a similar experience. It’s about a boy remembering his late grandfather and the stories he’d share about the place where the ocean meets the sky. The boy then goes on a fantastical journey to that place in an attempt to reconnect with his grandfather. It’s a sweet story that, I think, touches on using one’s imagination to soothe the feeling of loss. The illustrations are detailed and so stunning that I’m grateful that I own a physical copy of the book. There’s also a dreaminess to the story and the illustrations that I love.

This one made my 2021 favorites list and is another one that touches on using one’s imagination. In this case, it’s about using one’s imagination to understand the world. The story focuses on a boy riding the NYC subway train with his sister to visit their mother. While on the train, he draws what he imagines the passengers’ lives to be like. I love the illustrations, although they aren’t in a style I tend to favor. I think they match the tone of the story. Since the story is told from the boy’s perspective, it makes sense to do some of the illustrations in a way that seems as if drawn by him.

Here’s another great one. The Journey is about a family seeking refuge in a new country after war ravages their homeland taking their father. Now, it’s up to the mother to find a safe place for herself and her children. It’s a touching and timely read that’s inspired by the stories about migration that the author has collected over the years. The illustrations are beautiful and sometimes have a lightness to them that balances the heavy topic.

So there you have it, some of my favorite picture books.

For more,see my list of illustrated books I’ve read here.

Let me know if you’ve read any of these or if you have one to recommend.