Top 5 books set in the past

(How far back in the past is completely up to you.)

A couple months ago, I did a tag thing that made me realize that historical fiction is one of my most read genres, and apparently one of my favorites too, so there were many books I wanted to mention for this post. Instead, I chose to focus on five I haven’t chatted about in a while. 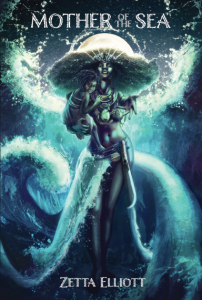 Mother of the Sea by Zetta Elliott

I consider this a short story because of how short it is. It’s a mermaid story that’s set during the Atlantic slave trade, and it’s about a young girl who is abducted from her village and sold into slavery. The majority of the story takes place during her journey across the Atlantic, and it also includes an appearance by a Yoruba deity named Yemoja (or Yemaya in the Americas), which is a water spirit. It was an interesting story, but I wish it was longer.

I enjoy reading Cruz’s books. Dominicana mostly takes place in New York City during the mid-1960s. It’s about a young woman named Ana who marries a man twice her age when she was just 15 years old to get the opportunity to immigrant to the U.S. from the Dominican Republic to better support her family. It was an engrossing read.

For something a little different, here’s a comic book! Lady Killer is about a 1950s housewife named Josie Schuller who happens to also be a ruthless assassin. The story can get pretty bloody when Josie goes about committing her assassinations, so if you’re not one for violence and gore, this may not be for you. However, the tone of the story is quite light, and the art is fantastic with colors that pop off the page.

And for a different look at the 1920s that’s not all party, there’s The Snow Child, which is about an old couple living on a homestead in Alaska. Jack and Mabel moved to Alaska from Pennsylvania to escape the scrutiny of their family and friends. The couple yearn for a child, and one night they playfully build a snow child. The next morning, it seems that the snow child was made real and will forever change their life. I love writing in the book and admired it more than anything.

I read this years ago, when I was in high school. It was one of my favorite books back then, and I’d like to reread it to see if that is still true now. Rasputin’s Daughter is about the “mad monk,” Grigori Rasputin, who was assassinated in December 1916 in St. Petersburg, Russia. It recounts the events leading up to his last days, but from the perspective of his eldest daughter.