When I first read this message in a friend’s Facebook post, I wondered who he was talking about. Surely not my Toni Morrison. I was in disbelief and even when another friend confirmed the news and I finally saw the articles pouring in on the web, I still didn’t want to believe it. Toni Morrison had passed.

Toni Morrison died on Monday, August 5, in Bronx, NY, from complications of pneumonia. She was 88. As the news of her passing settles around me and into me, as I begin to accept it, I feel a loss and am moved by her passing. No, I did not personally know Morrison, nor have I read all her books or have met her, but I felt her presence in my life. She (her books) were a presence in the households I lived in, especially when I moved to the U.S.

END_OF_DOCUMENT_TOKEN_TO_BE_REPLACED

I am late with this post. More than two weeks have passed since Gloria Naylor died, but I couldn’t let her passing go by without making a note of it on this blog. Gloria Naylor, a noted African-American writer best known for her novel The Women of Brewster Place, died from heart failure on September 28 near her home in the Virgin Islands. She was 66.

END_OF_DOCUMENT_TOKEN_TO_BE_REPLACED 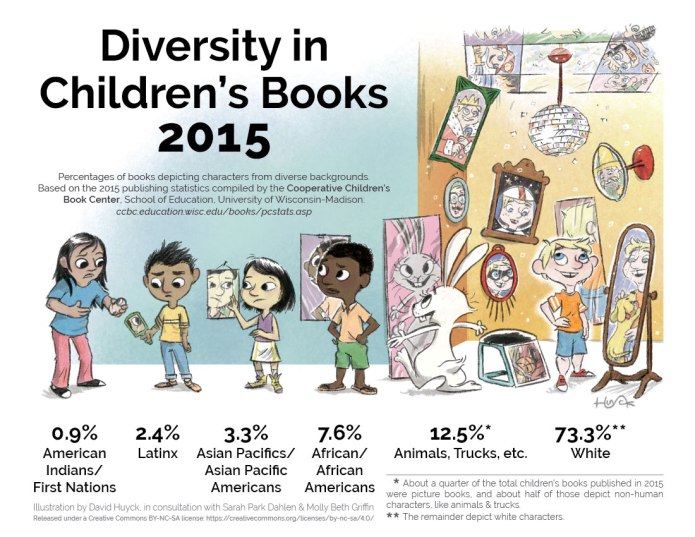 While on Facebook, I found a link to this great blog post that features an updated illustration of diversity in children’s books. It uses recent statistics from 2015.

At the 2016 ALA Annual Conference, author Tameka Fryer Brown presented the Cooperative Children’s Book Center’s (CCBC) multicultural publishing statistics during the panel “Celebrating Diversity: The Brown Bookshelf Salutes Great Books for Kids.” She displayed Tina Kügler’s oft-cited 2012 infographic, with the comment that even though the numbers are now 4 years old, the image communicated inequity in publishing so well that she would use it at every opportunity.

Just before ALA Annual, St. Catherine University MLIS Program assistant professor Sarah Park Dahlen had posted to Facebook asking if anyone knew of an updated illustration, but Kügler’s was the only one anyone knew about. Friends said they would be happy to support an illustrator to create an update. Author/teacher Molly Beth Griffin saw Sarah’s post and queried her Twin Cities Picture Book Salon to see if anyone would be interested; David Huyck (pronounced “hike”) responded, and a… 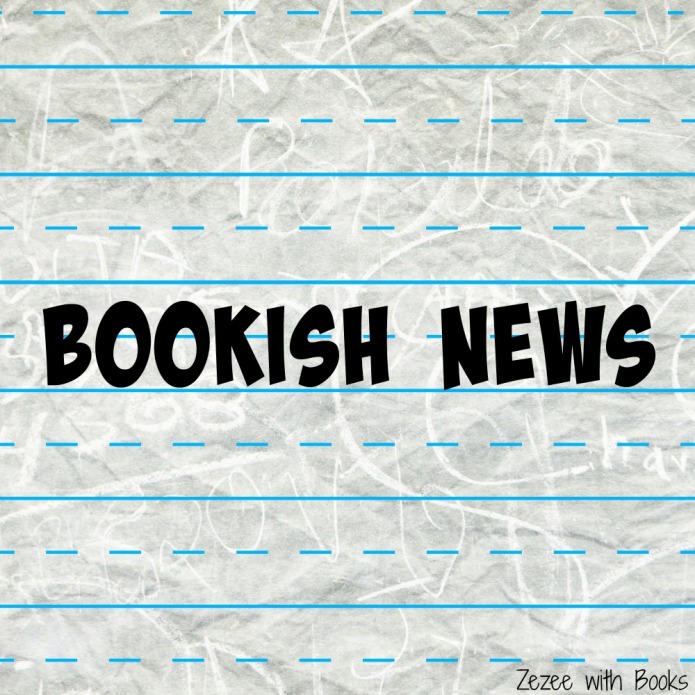 Will I ever be on time with these posts? I’m starting to doubt it. Anyways, here are some noteworthy happenings in the book world that were discussed in February.

On February 24, Simon & Schuster Children’s Publishing announced that they will launch a new imprint called Salaam Reads, which will focus on Muslim-themed children’s books. The books will be geared toward all ages and will include picture books as well as middle-grade and young-adult novels.

END_OF_DOCUMENT_TOKEN_TO_BE_REPLACED

I faintly remember the day I picked up Harper Lee’s To Kill a Mockingbird to read. It was the summer before sixth grade and I had read all the books I owned so I scoured my parents’ bookshelves for something new. The memory of the day and Lee’s story has faded from my memory, but I recall that I was so intrigued by the story that I completed the book in two days.

I didn’t know what significance the story carried. It was just something to read on a slow summer day. But I remember that I was touched by its contents and choked up a bit while reading. That’s the only experience I’ve had with Lee’s work. Since the release of the controversial Go Set a Watchman, I’ve debated returning to Lee’s books. I would like to re-experience her first novel and read the second for myself to see what it is about. But I have been skeptical about Go Set a Watchman because part of me believes that she was forced into publishing it. After all, she had avoided the media for years and had refused to publish another book after To Kill a Mockingbird.

I was sorry to learn that Harper Lee had passed. She died on February 19 in her hometown, Monroeville, AL. She was 89. With To Kill a Mockingbird, Lee so impacted literary canon that her novel became a staple on many high-school literature reading lists. It also won the Pulitzer Prize in fiction in 1961, a year after it was published. Though she will be missed, her work will continue to endure and she will be remembered.

May her soul rest in peace.

END_OF_DOCUMENT_TOKEN_TO_BE_REPLACED

I’m late with this news roundup but here’s a list of exceptional announcements I came across in January. I will just give the gist for each to make this quick. If you’d like to know more, just click on the link.

We already know that there’s a lack of diversity in the publishing industry but a recent survey by Lee and Low Books helped to illustrate to what extent this is so. According to the results, the overall industry is dominated by Whites, women, heterosexuals, and those without a disability.

END_OF_DOCUMENT_TOKEN_TO_BE_REPLACED

It’s been a while since I’ve done one of these posts and it probably would have been a while longer before I did one but the Man Booker Prize Winner was recently announced and I’m excited about it so I thought I’d share the good news. Guess who won?

If you’ve read my recent posts, then you’re not surprised that I’m excited about this. On Tuesday, October 13, it was announced that James’s recent novel, A Brief History of Seven Killings, was named winner of the Man Booker Prize.

END_OF_DOCUMENT_TOKEN_TO_BE_REPLACED

Zezee with Books
Blog at WordPress.com.