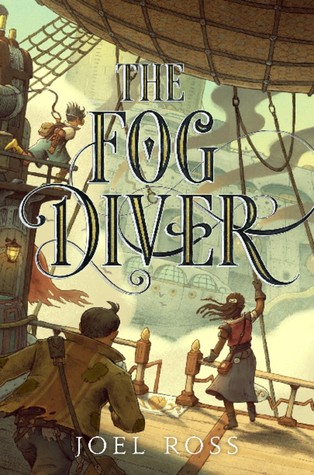 A deadly white mist has cloaked the earth for hundreds of years. Humanity clings to the highest mountain peaks, where the wealthy Five Families rule over the teeming lower slopes and rambling junkyards. As the ruthless Lord Kodoc patrols the skies to enforce order, thirteen-year-old Chess and his crew scavenge in the Fog-shrouded ruins for anything they can sell to survive.

Hazel is the captain of their salvage raft: bold and daring. Swedish is the pilot: suspicious and strong. Bea is the mechanic: cheerful and brilliant. And Chess is the tetherboy: quiet and quick…and tougher than he looks. But Chess has a secret, one he’s kept hidden his whole life. One that Lord Kodoc is desperate to exploit for his own evil plans. And even as Chess unearths the crew’s biggest treasure ever, they are running out of time… (Goodreads)