Since Game of Thrones is back with a new season (and everyone is in an uproar about Jon Snow), I think this is the opportune time to do this tag created by the Orang-utan Librarian. Thanks for tagging me, chica!

I love the Game of Thrones fandom, but I follow the book series rather than the TV show because 1) I don’t have HBO (boohoo for me) and 2) I’m still upset about the changes I saw in the 4 or so episodes I’ve seen of the first season. Really, I need to get over it and just watch the damn shows but it’s hard, so hard, for me to do that. I love the books too much.

But let’s forget all that and relish in our love for this fandom with this tag. 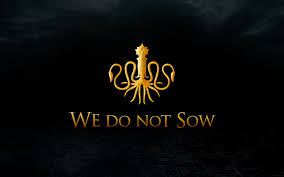 “We do not sow”: A book you would not be willing to invest in.

END_OF_DOCUMENT_TOKEN_TO_BE_REPLACED 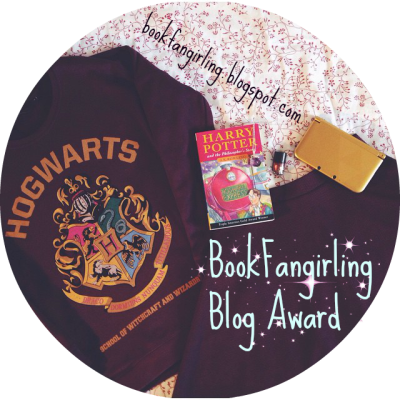 So a while back, I was nominated for the Book Fangirling Award by the Orang-utan Librarian, Umbreen, and Rachel. I did the post and thought I published it only to discover today that I didn’t. Oh well.

I’ve never before considered myself a fangirl but now that I consider it, I guess I am a fangirl of a few things, namely Harry Potter, Game of Thrones, and Supernatural. Thanks Orang-utan Librarian, Umbreen, and Rachel for making me realize this. (Click the links below to visit their blogs!)

END_OF_DOCUMENT_TOKEN_TO_BE_REPLACED

“Exploring My Bookshelves” is a weekly meme created by Victoria at Addlepates and Book Nerds. Since Victoria was on summer vacation, Shannon at For the Love of Words created her own topics, which I followed along with. Now they will both host the meme in alternating months. Visit either blog for the list of topics.

I have just one and it’s…

END_OF_DOCUMENT_TOKEN_TO_BE_REPLACED 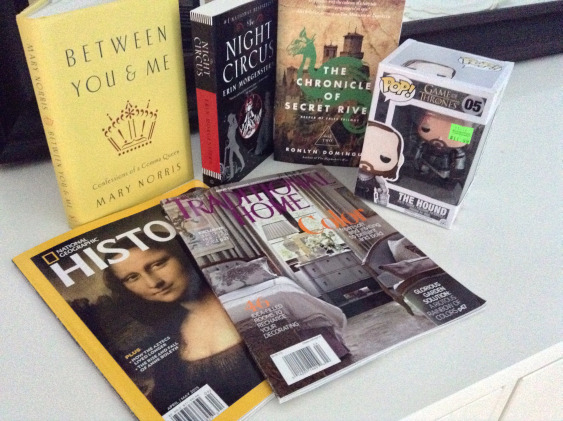 I did a bit of traveling in Pennsylvania during the last week of March to Pittsburgh, for work, and to Philadelphia, a belated birthday gift to myself. Apart from the time away from home and the fun I had, what’s awesome about these two trips is that I GOT NEW BOOKS!! Here they are:

First up is Mary Norris’ Between You & Me: Confessions of a Comma Queen, which I acquired at the annual American Copy Editors Society conference that was held in Pittsburgh. I’ve wanted this book ever since I first read of it and, being the book lover that I am, I annoyed everyone around me by constantly talking about it.

I was elated when I saw on the conference’s program that Norris was a speaker for one of the sessions, and I became even more excited when we were told that 40 early release copies would be signed and available for purchase after the session (this was in late March and the book was published on April 6). You bet I was one of the first ones in line to get a copy. I was so overjoyed, I didn’t know what to say to Norris when I met her other than that I’ve enjoyed reading her articles. As is characteristic of her, she signed my book with a pencil. I didn’t see what type it was but I bet it was a No. 1 pencil.

END_OF_DOCUMENT_TOKEN_TO_BE_REPLACED

It’s a lazy Saturday so I’ve decided to do another book news roundup, my third so far. I hope you enjoy reading them and find something to look forward to.

The Book of Yeezus: the Kanye West bible

As a commentary on today’s worship of celebrity icons, an Etsy shop is selling The Book of Yeezus, a bible in which every mention of God’s name is replaced with Kanye West’s.

With this product, the sellers say they are trying to highlight “the way cultural icons have come to be the contemporary spiritual figures in our information culture.” The book is described as a novelty coffee-table book in black hardcover with a gold-leaf imprinted title on the cover, all for $20 (Hollywood Reporter).

END_OF_DOCUMENT_TOKEN_TO_BE_REPLACED

Reading a book for the first time is filled with moments of wonder. If the story is gripping, you spend most of the time wide-eyed, reading quickly, as if the words already set in the book could somehow escape you. Approaching that book a second time does not dim the wonder but neither does the wonder consume you as on the first read. Things you glazed over in your excitement to know what happens next begin to emerge.

Such was the case a few weeks ago when I read A Game of Thrones a second time. I was surprised at myself that I missed the blatant foreshadowing at the beginning of the story—the direwolf dead with the horn of a stag broken in its throat. Martin even referred back to that scene a few times thereafter and still I failed to notice it. I was too mesmerized then. Too curious and reading too quickly to pay much attention to details.

This isn’t surprising to anyone who has read the books in George Martin’s A Song of Ice and Fire series, or watched the television show on HBO. The story centers on various characters spread across the kingdoms of Westeros and its neighboring lands. It is filled with twists and numerous cliff-hangers that will keep you both hooked and frustrated with GRRM since the character perspectives tend to switch from chapter to chapter.

Although I knew the ending and what would happen to the characters later in the series, I still anticipated the turn of every page. Again, I found myself staying up late, wide awake, and reading quickly to satiate my curiosity and desire for a happy ending though I knew better. I did not expect this of myself. I thought my second time through would be much calmer, as it usually is, but I was wrong.

END_OF_DOCUMENT_TOKEN_TO_BE_REPLACED

I found this on Buzzfeed—Affordable and Clever Gifts for Your Writer and Bibliophile Friends. I’m considering to buy it since I tend to get great ideas at the most inopportune moments like in the shower, especially in the shower! The pad is waterproof and costs just $7.95.

END_OF_DOCUMENT_TOKEN_TO_BE_REPLACED

If you are a Game of Thrones fan, you should check out Flavorwire’s post, The Absolute Geekiest ‘Game of Thrones’ Merchandise. It went up today. The merchandise listed ranges from shot glasses to book ends to refrigerator magnets to the Irone Throne itself.

My favorite is the umbrella that looks like a sword. Sooo cool!! I’ve always wanted a sword! If I get that umbrella, I would carry it everywhere with me. And I dare anyone to try robbing me. It would’t work. No siree! I would defeat the robber with my umbrella.

Here is another cool post that I found while surfing the net. This one is from io9, my new favorite website. It shows gifts ideas for those of us who love fantasy and science fiction and where to find them.

For the Game of Thrones, this pair of Converse is my favorite. The Targaryen colors are look great on it. Check out the other ideas here.